The Meaning Behind The Fat Chance Cover Girl 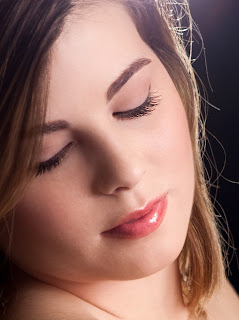 Last night, I had one of the most meaningful conversations of my life with a Fat Chance fan who tells me her heart was touched by Cass's story. It's been happening a lot lately, and it's all due to Cassaundra Keaton.

For some, she's just a character in a story. This photo to the left is just a stock photo that I paid to use because it looks the way she looks in my mind. Her closed eyes help us feel the insecurity that's inherent to who Cass is, but if you've seen the larger cut of this photo on the cover of Fat Chance, you can see enough to know that she's nude in the photo.

You can't see much, just enough to get the feeling of her confidence, a sense of admiration for what it must have taken from  this girl to pose in that way.

When you put those things together with the story told in the pages of Fat Chance, the story of an emotionally lost girl who finds fresh hope and new love, then this photo becomes much more than a photo of an unknown girl with a pretty face and perfectly perfect skin.

She becomes Cass. She becomes what Fat Chance readers all over the world have grown so attached to.

She becomes the image of personal strength, the image of confidence, the image of how any woman can become strong within herself, regardless of her height, her weight, her financial class, or her intellectual status. She becomes a visible image of the struggle every woman will face at some point in her life.

That's why this book, and this tour mean so much to me. It's not just a story, and it certainly isn't just
a story about an emotionally struggling FAT GIRL.

It's a story of overcoming - and it means so very much to me to watch the story go out into the world and be understood. It means so much to me to know that Cass's story has touched something within the hearts of women struggling around the globe. Because we're all so alike in our emotional struggle as women, and each and every one of deserves the joy of walking around in her own skin with confidence and belief in herself.
Personal Development The Author Journey