I have my public profile on Facebook, my author profile that I use to reach out to my readers. It's the way I communicate most often (and in the most timely manner) with the people who read my books and reach out to me for one reason or another. It's the way I keep people updated on what's coming next, my writing progress on current projects - and I hope to someday post photos from signings and other events like that.

But I keep a personal profile too. I generally ignore friend requests on it unless I actually know the person, because that personal Facebook page is like a daily newsletter into who I am. I post songs that I've listened to that touch me in whatever place my life has taken me. I post bible verses or quotes that inspire me. I post my personal thoughts, movies I'm watching, news about my daughters and my family. But it serves a second purpose, too, that personal profile. It's my personal newspaper. I follow my local news channel, my local police department, and several blogs that I've been reading for years.

One of them is the "It's Almost Naptime" blog, which is the Facebook page for the popular blog of the same name. The blog is written by a funny Christian mom just trying to do her best every day, something that I as a Christian mom can relate to.

But then she touched my writing. I woke up this morning and was browsing around when I saw that Missy (the aforementioned fabulous mom-blogger) had posted a link to an article about the CEO of Abercrombie & Fitch. She said:

"I don't let my kids wear Abercrombie & Fitch. Why? Because they pretty much defy all I stand for."

It made me curious because I have read this woman's blog literally from the beginning. Not since the beginning of the blog, but because when I first found it years ago, I literally went back through the archives and read them all, slowly falling in love with the honesty of this mom and her efforts to show both her successes and her miserable mom-fails to the world. She became a sort of role model, and her family's journey through Ethiopian adoption has been incredibly inspiring, wildly touching, and amazingly, astonishingly beautiful.

Not to mention, the newly adopted addition to the family is. Just. Absolutely. Charming.

But what does that have to do with me or my writing?
Hang on. I'm getting to that.

In case you didn't already know, as a teenager I was pretty overweight. Due to health issues and some other personal issues with my mother, I led a slow life and spent a lot of time at home. Tack on hormonal changes and personal life issues and you've got an overweight, self-conscious teenaged girl who doesn't need help not feeling good enough for anything. Two kids later, the confidence is better but the body issues are permanent. Things just don't look the way they did before.

And now? Now I have two daughters of my own, two little girls growing up in a world that will pressure them mercilessly to be thinner, smarter, prettier. Skankier. Sluttier.

The older they grow, and the more exposed they are to the world outside of our home and the safe confines of our extended family, the more battered they will be. 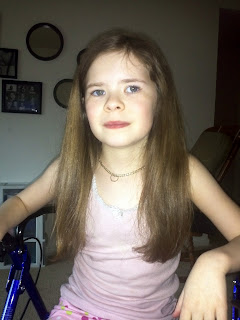 This is Josephine. My oldest daughter is nine years old and thin as a rail. She was born at exactly 20 inches long and weighed exactly 8 pounds. She's average height for a girl her age, but she's thin. She's so thin her bones'll poke you if you aren't careful, and her weight is monitored closely in her pediatrician's office. She's really really thin. Really thin.

Abercrombie would approve, though my oldest daughter eats like a horse. She has a cousin only a few short months younger than she is, and he's an athletic boy with a stocky build and a healthy energy. He's rough and tough and never leaves the house without his Superman complex; he's charming and funny and sweet. But my daughter can sit down to dinner with him and out-eat him any day, all day long. She's the classic stereotypical example of a wild and fast metabolism ... Our family is quite convinced that she could live on cake and still be thin.

Which she wouldn't mind, but since diabetes runs in our family she lives on meat and veggies and noodles like everyone else. 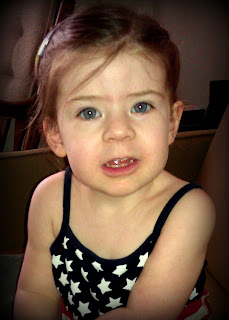 In the meantime, I have a second daughter. Eden is a chubby little whirlwind that'll be four in less than two weeks. She was born larger, taken early by c-section and still weighing in just short of ten pounds. For those of you who don't have children, you should know that those two pounds? They make a difference.

My youngest daughter was covered in those classic fat little baby rolls; she was like the little segments of an earthworm all smashed together, or maybe one of those little marshmallow figures you can make with toothpicks ... if you use way too many marshmallows. She's outgrown a lot of that "baby fat," but my youngest daughter will likely never know what it's like to be truly thin.

She's got a little round belly, and she got her mama's ghetto booty. She's got chubby little fingers and she's easier to snuggle with because her bones don't stick out. I'm sure Abercrombie & Fitch's CEO would be outright disgusted. Aren't you? I mean really, those chubby cheeks? Someday she'll be a woman with hips and breasts and curves and everything. Isn't that revolting?

Right. No, it's not. Because she's beautiful - and she will be beautiful regardless of the shape and size of her body. And so will her sister.

But they are already being told they aren't good enough unless they live up to a standard decided by the bullies of today's corporate world. My daughter Josephine is already being told that she's okay as long as she does whatever is necessary to stay thin enough, even if that means excluding, rejecting, or outright bullying her own chubby little sister. She's being told that if she has to starve herself, she should. If she needs to puke herself half to death, she should. And if she ruins her health forever? Who cares, because in remaining thin enough, she can be cool enough to wear an overpriced shirt that doesn't look any better and isn't made any better than a reject shirt in a thrift shop.

I don't think so.

This is part of the message behind Fat Chance, part of the message behind Cass Keaton and her story, a story about an emotionally battered woman driven to the brink of suicide by a society who cares more about the number on the tag in her jeans than the character that oozes from her heart. It's about her inner strength and her ability to carry on; it's about her willingness to accept herself, no matter what pigs like Mike Jeffries would say.

Fat Chance is about taking a stand against the commonly accepted viewpoint that "fat" means "ugly," "unhealthy," lazy," "smelly," "uncool," or "subpar." Because every now and then? "Thin" gets into someone's brain like cancer, and it eats at them until there is nothing left inside them but a "small(minded)," "shallow(personality)," "ugly," "arrogant," "selfish," "high-handed" "loser."

It's disgusting, really. People like Mike Jeffries and his anti-fat campaign are why we need organizations like the Pacer National Bullying Prevention Center, the WWE Be A Star program, and others that help fight the permanent emotional damage inflicted by shallow appearance-based exclusivity. He and others like him are why there are books out there like Fat Chance, he's why we need this message trickling through the inner workings of our hearts. Because I've said before and I'll say it again:

Fat or thin, short or tall, large or small, rich or poor, we're all just people. And no one person has the right to tell the rest how to look, what to wear, what to weigh, what to eat, or how to exist.

Because in the end, we're all still just people.
Personal Development