By Brandi Kennedy - May 28, 2013
So there's this blog I've been loving lately, and they usually participate in this little thing called Top Ten Tuesdays, which is just where you list your top ten of something. Generally, there's a set topic that all participants use, but this week the topic is "freebie," so today seems like a great opportunity to jump in and get my list on.

You know, it's hard for me sometimes, to think of a Top Ten anything. When I did the Fat Chance tour with TTC&B2B Book Tours back in the end of March/beginning of April, one of the bloggers involved asked me for a Top Ten list, and I was in total panic mode for a week.

It should have been easy, you know? Like, okay, what about Top Ten Foods?

Nah, a chunky author who wrote a book about a depressed plus-size woman CAN NOT write about food, right?

Top Ten Songs?? Yes! I love music!!! But wait, another blogger wants a playlist which is basically the same thing. Hmm. What to do?

I did finally figure it out by simplifying the concept and giving a regular Top Ten of my favorite things in general, spanning different topics because I really couldn't think of one topic where I had ten solid favorites.

So, here they are, my Top Ten Favorite Books. Or series', because it'd be silly to have a Top Ten that's mostly made up of one series.

Anyway ... In no particular order:

They are an intriguing mix of sex and medicine, past and future, war and peace, love and hate. They fascinate me; they teach me. They've sucked me in and still haven't let me go yet. I love them.

Each book is a heavy, time-consuming commitment that took me at least a month (each book) to read because of the thickness of the book. I swear there isn't a book in the series that's less than about 800 pages, and I LOVE that. I do enjoy the shorter, more quickly pleasurable read ... but Diana's Outlander books have such meat on them, so much to absorb and take in, so many characters that are so easy to love, or to hate. They aren't thrown in all at once, either, but are instead introduced in bits, and there are even some that we get to watch grow up through the pages of the series, from childhood right on up to adulthood where they deal with their own issues and experience their own loves. The premise behind these books is a woman from 1946 who is accidentally thrown through a sort of hole in the stretch of time, and she finds herself suddenly two hundred years in the past, deep in the highlands of Scotland. Understandably, things are rather different there than what she is accustomed to, and poor Claire is forced to adjust pretty quickly. She does well though, and her journey makes readers maybe begin to crave a simpler time when people were (generally) more honest and life itself was more (typically) routine. Not to mention, rough and tough but sweet and loyal Jamie Fraser?? Yum, yum. Granted there are odd things about him that I had some trouble with, but a simple reminder that he's from somewhere around 1745 generally helps me to regain my sympathy for his old-old-old-fashioned and sometimes downright primitive ways. He's sweet, and his loving way of always providing for Claire, always looking out for her just wins me over, every time.

Thus far, the series consists of:
Written In My Own Heart's Blood is expected to release in the fall of 2013, and let me tell you, the wait is almost literally killing me. I read other books mostly because that one isn't out yet, to tell the truth. 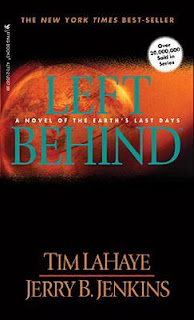 The LEFT BEHIND Series

is next, written by Tim LaHaye and Jerry Jenkins. These books are almost entirely responsible for my salvation as a Christian. Now, I won't go too far into that right now, but I'll say this, I read these books (at first, at least) as a non-Christian and that didn't stop them from being fabulous. From a non-Christian perspective, they've got it all: action, adventure, good guys, bad guys, love, life, and learning. It's the long-awaited apocalypse and the bad guys are taking over. Through the series, you follow a little group of the good guys, just trying to get by in a world that is entirely new to them, albeit familiar in many ways to the way it used to be.

From the Christian side of it, these books help to explain the book of Revelation and the End Times prophecies in a way that a lot of "regular" people just don't understand. They bring reality to the end books of the Bible is a terrifyingly real way, bringing home the horrors predicted in the book of Revelation. These books take the prophecies in a literal way (which I love), showing us what the world will be like when the prophecies come into play and Revelation takes hold of the world. They tell us (Christians) why it's so important to minister to others, to our loved ones. Because as Christians, we aren't afraid of the apocalypse, we aren't afraid of the wars and the ... whatever. Because we won't be there. We believe it all starts with "the Rapture," when Jesus calls believers to Heaven, and then there will be the final battle between good and evil, God and Satan vying for the hearts and souls of those left behind.

And none of us want our loved ones to be here for that.

But anyway, Christian and non-Christian alike, these books are AWESOME, even if you're only reading them for the story.

My, my, this post has grown long, hasn't it? Better get on with this in shorter form for the rest then, huh? Here are a few other favorites of mine, also in no particular order:

- certainly different, but they were a courageous break from the norm, and I love the love story
Anything by Nicholas Sparks

brings back Anne Rice's old style, but with a twist
A Little Princess

- I loved being assigned to read this Scott O'Dell classic in school
... and ...
Hatchet

- This series by Gary Paulsen is my all-time favorite YA read. The survivalist theme caught me right up, fascinated from the beginning.

And there you have it! My Top "Ten" Books!


NOTE: I often use affiliate links in my product mentions on this site. In the interest of full disclosure, you should know that if you click my product links and end up purchasing through them, I will receive a small commission for referring you to the merchants and products I love best. This is, of course, at no extra cost to you - but my family and I appreciate your support! (To see a list of other companies I'm currently working with, click here.)
Top Tens