the newest release by the amazing Lauren Dawes

. Not only is this woman's mind fascinating, but her talent is on par as well. She spins a tale with this book that you can't help but be dragged into. Not only do I admire her professionalism and her tenacity as an author, I admire her greatly as a friend as well. 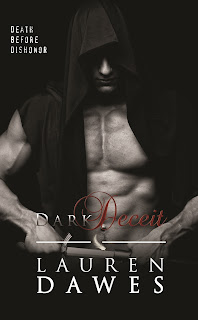 About the Book:
The time of the Aesir gods is over. Now they live among the humans in their bustling modern cities. Their brutal dominion over the gods and humans may have ended, but their actions have not been forgotten.

Korvain is feared like no other. His ruthlessness and cold heart are legendary, but when he is given the task of killing one of the most fabled goddesses of all time, he is left with an undeniable desire to make her his own. Failure in his task means only one thing: death. Will he follow his orders, or will he follow his heart?

Bryn’s whole world crumbled when she left Odin’s service to protect the other Valkyries. Now living with the humans, she is the only thing standing between them and total destruction. But her beliefs are about to be shaken to the core when she meets Korvain—a completely irresistible Mare who threatens to take away more than just her innocence.


My Review of the Book:
I read Dark Deceit in two sittings. Literally. It took me around 24 hours to read, and I loved it. But let me give you a little back story first.

When I first read Lauren Dawes' work in 'Half Blood,' her writing style was different enough from my own that I had to adjust to it a little bit before I could really sink into the story. As a romance reader, Half Blood seemed a little dark to me and didn't have the overt romance factor. To be fair, Lauren Dawes is not a romance writer (generally). What she is instead is a fabulous author in the urban fantasy genre, with the ability to spin multiple characters and storylines into something that feels real and personal even if it isn't.

By the end of 'Half Blood,' I was moving beyond my original adjustment to Ms. Dawes style and was enough into the idea behind the story to want to read 'Half Truths.' I needed to know the rest of the story. Therefore, by the end of 'Half Life,' I was quite literally INFURIATED that it was ending. The books were being marketed (at that time) as a trilogy, meaning there were only plans for three books. The third book, 'Half Life,' leaves you with a very enticing cliff hanger, and at that point I was thoroughly hooked. I couldn't stand the idea of the series ending where it did. I needed more!! I can't even tell you how happy I am to know now that there will be more to the series, and that the Helheim Wolf Pack lives on. To that end, I will be writing full reviews of all three Helheim books just before the release of book number four! No dates yet, but I'm waiting anxiously so I'm sure I'll keep you updated.

In the meantime, Lauren has been busily crafting yet another masterpiece. Quite a bit different from the 'Half Blood' series, 'Dark Deceit' is the first book in Lauren's new 'Dark Series.' In 'Dark Deceit,' Ms. Dawes gives us a modern peek into the world of the mostly-forgotten Aesir gods of ancient history. We're introduced to Odin, Loki, and Thor; we're introduced to a group of Valkyries, and we're introduced to Korvain (not necessarily in that order). The story that unfolds here is A-plus-MAZING, with a cast of characters that are the perfect mix of strong-enough-to-make-it and weak-enough-to-be-real. I can't rave enough about this book. It's got suspense, sex, violence, romance, betrayal ... it's got EVERYTHING.

Bryn is one tough chick, determined to need no one and to stand strong on her own, the leader of the Valkyries and the one they all know they can count on. Korvain is the dominant leader, the black night of destruction, hell-bent on doing his job and doing it well. Loki has been wronged and is seeking revenge, while Odin is scrambling to put his fallen existence back together again.

You can try to guess on your own though,
because there's a book trailer! 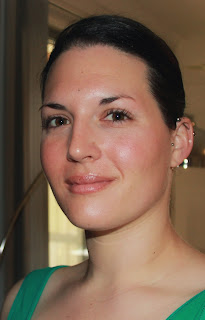 Lauren Dawes is an urban fantasy/paranormal romance writer and the author of the Half Blood Series and the Dark Series. You won’t find any friendly vampires in between the pages of her books; just blood, teeth and violence. When she’s not writing, she’s reading or teaching. She currently lives in Victoria, Australia with her husband and cat.

And now that you know a little about her, go buy the book, read it ravenously, review it lovingly, and then stalk her shamelessly.

NOTE: I often use affiliate links in my product mentions on this site. In the interest of full disclosure, you should know that if you click my product links and end up purchasing through them, I will receive a small commission for referring you to the merchants and products I love best. This is, of course, at no extra cost to you - but my family and I appreciate your support! (To see a list of other companies I'm currently working with, click here.)
Book Reviews