By Unknown - August 30, 2013
I have to start by saying that Lauren isn't writing my typical genre. I read a little mix of everything, including fantasy and paranormal, but I'll admit that most of what I tend to read is in the contemporary romance area. It just seems to be the genre I relate more clearly to, since I tend to be a bit of a romantic most days. 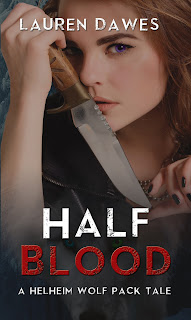 Still, I do branch out here and there. I get into stories about ghosts, witches, and even faeries. I get into vampires and werewolves from time to time too, and that brings me to Lauren Dawes and the intricate story of 'Half Blood.' In the beginning, there are a number of characters to keep track of, but Lauren pulls you right in, giving you little pieces of back story and little bits of the plotline, hooking you, and coaching you through the story as your mind races to figure out just where she's taking you.

As we're brought into the war between the werewolves and the vampires, little twists and turns keep things lively. We're introduced to a cast of well-developed characters, each with their own back story, each with a purpose and a point. And then there's Indi. Indi, the felvair, the half blood. She's valuable, she's scary, she's tough, and she doesn't take any sh*t from anybody. Then again, she's got her sensitive side, her soft side. And she's got one weakness, other than her developing thirst for blood: Rhett.

Rhett has been appointed Guardian of the felvair, and it's his job to watch over her. He gains her trust, earns her friendship ... saves her life. He's strong and sweet, and incredibly protective, willing to give anything or do anything to see to Indi's safety. But he has his own weakness: a birth defect that sets him apart from the rest of his pack and leaves him emotionally scarred and insecure.

In the end, what will happen with the Helheim pack? Will Rhett be able to rise above something he's always seen as a fatal flaw within himself? Will Indi be able to accept the changes that are coming her way? And what will happen when an enemy does something unforgivable, asking a ransom that simply cannot be paid??

You can find the answers to all these questions in Half Blood, by Lauren Dawes, but if you need an extra nudge to get you branching out and trying something new, consider this me nudging. This is a book you want to read, with a cast of amazingly lovable characters, and plotlines that get you really thinking about the real world and what could be hiding in the shadows. If you're looking for a thrill in your next read, get yourself on over to Lauren's Amazon page and one-click yourself into something new.

Lauren Dawes is an urban fantasy/paranormal romance writer and the author of the Half Blood Series and the Dark Series. You won't find any friendly vampires or werewolves in between the pages of her books; just blood, teeth and violence. When she's not writing, she's reading or teaching. She currently lives in Victoria, Australia with her husband and cat. Follow here: Facebook / Twitter / Blog / Website / Amazon / Goodreads / Pinterest
Book Reviews