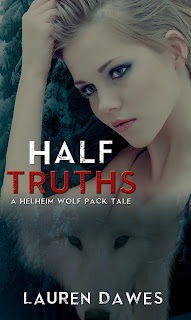 Picking up only days after the end of Half Blood, Half Truths brings us into deeper contact with another wolf from the Helheim wolf pack, Vaile. In Half Blood, Vaile had the look and feel of a cold-hearted brute, but right from the beginning of this story, we're given a deep look at his softer side. We're given a chance to see him in a different light, a chance to understand why he's so gruff ... we're given a chance to like him. We watch him learn to open up again after the pain of his past, and we get to know a few new characters, too.

But this doesn't mean that Lauren has forgotten the first of our Helheim loves; Indi and Rhett are still very much a part of the story, and we're taken along as Indi learns more about what it mean to be the felvair, as she learns more about the ways her life will be changing. Rhett's life is changing too, as he learns to take on new responsibility, standing strong for his alpha as tragedy threatens the pack.

And in the midst of everything, a war among the wolf packs is looming ever closer in Half Truths by Lauren Dawes. If you've read Half Blood, believe me, you want to see the next installment. You want to follow the story. You want to know what's coming next. So get on over to Amazon, and get that one-click finger to clicking.