By Brandi Kennedy - August 05, 2013
I got an email a while back that said (among other things): "You don't just have fans, you have hurting and growing women who really need to hear the message you're telling. They're eager for some grace. They need someone to tell their story for them, with all the brutality and all the courage both, so they can see who they really are - valued, strong, unique, loved and loveable - through the framework of the story. And you do that very well, and with so much heart. You don't shy away from the worst, which makes the best all that much more meaningful."

I love knowing that someone out there is touched by something that I wrote, but it's also been incredibly fun to realize, ever so slowly, that I'm growing as a writer, really growing. Not just within myself, either; I'm growing a somewhat small but still very real public existence and with the success of Cass Keaton (Fat Chance, Kingsley Series, #1), I'm realizing that it puts me in a place to make a difference.

I can now stand out against bullying, or I can lobby for autism awareness. I can make a big issue over my personal views, the debate on gun laws, child abuse, childhood cancer, or whatever. And if I take a stand, people will listen. Maybe not a lot - not yet - but some will.

This has been on my heart for months now ... the idea that I can get involved with something, that I can lend myself and my talent and my voice to something.

So I've been writing, working a plot line into a story, working some of my personal history into something that I can share with you in hopes of helping other women around the world. This story, when it's finished, will be my way of taking a stand - the first step in what I hope will grow into something much larger and more influential than I can ever be alone.

It'll be me, using what I've got to help make a difference, no matter how small. And I don't know exactly how I'm going to do it yet because I've never been in a position to do something like this before, but as the idea becomes more of a story, more real in my heart, you can bet that I'll be giving more details until I've got it all worked out and ready to show to you, ready for you to show to others. 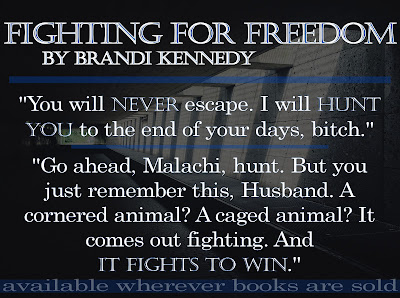 Edited to add: Fighting For Freedom is now live and available for purchase (click the title above), and has fostered the start of what has now come to be called the Undaunted Army - a force of readers looking to change the world and stand against the horrors of domestic abuse. Enlist in the Undaunted Army to learn more about how you can get involved - or join the movement today by picking up your Undaunted Army Officer Commission on Patreon. (April 2018)
Personal Development The Author Journey