By Unknown - September 01, 2013
Get ready folks, this is book number three, and book number four is set to drop TOMORROW!! 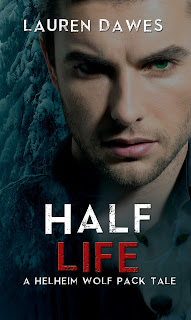 Following the pattern set out with the second book, Half Life starts only a few days after Half Truths ended. The Helheim pack has suffered its first loss in the war between the packs, as an enemy seeking revenge takes more definite steps to fuel a feud that's been growing for some time. The war among the wolf packs is coming to a head, and no one can anticipate the tragedy that's coming.

During the course of this war, Sabel is struggling with his grief over the loss of his best friend as he tries to help protect his pack, to help protect his alpha ... and to earn the love of Ivy, a member of another pack (and the twin sister of Sabel's now-dead friend). Together, they seek revenge for Colton's death, but as the war becomes more and more ugly, lives are lost, homes are lost, and some things will never be the same again.

As we're taken through the story, we're introduced to a few new characters, and we're given updates on all the characters we've loved in the last two books. This is a story of war and blood, loyalty and love. It's an adventure you don't want to miss.

I have to say, Half Life by Lauren Dawes is a thrilling continuation
of her much-loved Half Blood Series. And so, I leave you with this:

Will the Helheim pack survive their struggles and losses? When a new alpha rises to the top, the pack will be changed forever, and there is still the ever-present challenge of increasing the ranks of the pack. I can't wait to see what happens next, and if you loved Half Truths, you'll love watching things come to a head in Half Life. You'll love getting to know the warmer side of Sabel, and you'll be in for a major shock when the war between the wolf packs reaches a boiling point. Big change is coming for the Helheim wolves, so get on over to Amazon, and get that one-click finger to clicking.