By Unknown - September 28, 2013
A few days weeks (?) ago, I was approached and asked to review Belinda Boring's new release, 'Loving Liberty'. My review for this book has been live on Amazon and on Goodreads for a little while, but I'm just now getting around to sharing the review here ... life has been busy! So without further ado ... 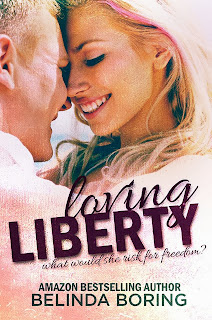 The Blurb
Liberty Montgomery is many things: A dutiful daughter. Perfect wife-in-training. Easy to manipulate. Compliant. But secretly, she wants more.

For years, Liberty has dreamed of a life filled with opportunities - a life where she makes decisions, living by her own rules. Unfortunately, her parents have other plans for her, ones that involved her submission and total obedience. Every attempt to break free from their control is met with threats, leaving her feeling trapped. Just when all seems hopeless, Liberty meets Oliver Nichols. With just two words, be brave, he stirs up her secrets longings for more ... friendship, fun, and independence. He almost has her believing her dreams are possible. However, taking a stand can be terrifying when you've spent your entire life pleasing others.

Are some chances worth taking? What would she risk for freedom?

However, none of that distracts from the beautiful love story. Oliver is a complete sweetheart, utterly respectful of Liberty as a lady. He doesn't swear around her, doesn't pressure her; he only encourages her to become on the outside what he can already see on the inside. She's spent too long being oppressed and sheltered and he steps in, in the sweetest of ways, to show her an entirely new side of life.


Oliver shows Liberty another side of herself too, helping her to take hold of her own inner strength. Liberty's life is a bit of a mess and she's been hurt by the people who should be her inner circle, people who should be her support system but aren't. Liberty is, in many ways, the classic damsel in distress; but don't mistake her for a weak character; Oliver certainly didn't!


And that leads me to my very favorite thing about this entire story: Oliver doesn't save Liberty from her life. He doesn't sweep her away from her troubles and become her hero. No, instead he encourages her, he builds her confidence, and he helps her to believe that she can be her own hero.


He doesn't save her ... but without swearing, without sex, without pressure, and without an overload of drama, Oliver simply helps Liberty to learn that she has what it takes to save herself.

I'm sure you can tell that I loved 'Loving Liberty'! If you'd like the chance to love it as much as I did, check it out for yourself on Amazon or Barnes & Noble! You can also learn more about Belinda Boring and her books at: Facebook / Twitter / Website / Pinterest
Book Reviews