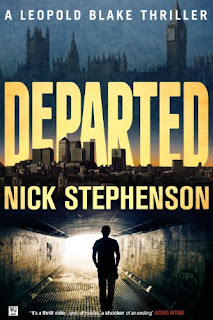 The Blurb
"Playtime's over ... Expert criminology consultant Leopold Blake is having yet another bad week. While tracking a psychopathic serial killer through the streets of London, the reclusive investigator realizes with chilling certainty that history is about to repeat itself - with devastating consequences. Where Scotland Yard and MI5 have failed, Leopold must find a way to hunt down and apprehend a ruthless maniac before he strikes again.


And the clock is ticking.


Now Blake and his team must face their greatest challenge yet: an unseen force, intent on wreaking havoc throughout the city, is hunting on its home turf - and Leopold is about to realize that the good guy doesn't always win.


Departed is another exhilarating installment in the Leopold Blake series of thrillers, which can be read and enjoyed in any order.

My Review
This book starts out with a hook paragraph that successfully grabbed my interest and kept me turning pages:

"A human body plummeting from a cruising altitude of thirty-five thousand feet takes three minutes to hit the ground.  Low pressure and lack of oxygen cause loss of consciousness for most of the fall, until the last minute or so, where the average person wakes up just in time to see the ground hurtling toward them at over one hundred and twenty miles per hour."

It's a spectacular hook, right? I don't know if the information is entirely true - but honestly, I don't care. I was hooked. I also really like the premise behind the story both in the beginning and as it develops. It's a great idea. However ... the writing left something to be desired in many places, and there are several things about it that hold me back from actually saying that I love it - or that I even like it, entirely. In fact, these things completely disconnected my original hook into the story, and I had to force myself to finish the book, seeking out something that would redeem the story for me.

For one, Leopold, the main guy of the story, is an FBI consultant, contracted to investigate a case for Scotland yard. Though he is one of the main characters and this aspect of who he is as a character is made abundantly clear, he is all-too-frequently referred to as "the consultant" throughout the book. I don't know if the purpose of this is to lend mystery to his character or to remind the reader of Leopold's job, but for me it was almost like the insertion of an entirely new and unnamed character. This is done with a few other characters also, and at times, I found it distracting.

There are also dozens of places where the story and characters are entirely unrealistic, either acting like they know next to nothing when they should be more knowledgeable and well-trained, or spouting off unnecessary details that they shouldn't have known or been able to recognize in the first place.

But in spite of those things being horribly distracting at best and completely annoying at worst, there are also places along the course of the story where, as a writer myself, I would sit back a bit and marvel at the unexpected beauty of the prose. One such example says:

"He took a moment to soak in the beauty of her, always moved by the elegance of the human body in the moments before death, by the stillness and calm that washes over a person when they know there's nothing they can do."

This is a murder scene - and by the description, you're led in your mind to imagine a pretty grisly picture. And yet this man, vicious as he is, is taking the time to enjoy what he sees as beautiful, his handiwork. This particular passage was fairly well written and I liked it.

In the end, the book is somewhat redeemed as being worthy of the free read because the plot sped up and did actually surprise me a little with some of the twists. Still ... it's not five stars. It didn't "thrill" me, and I'd have been pretty mad if I hadn't gotten it on a free day.

In my Amazon review, I gave this book three stars, because in spite of the distracting elements and bits that were unrealistic, I do have to admit that there was plenty of content I did like. And to be fair, if it hadn't be so unrealistic in certain parts, I'd likely have rated it much higher.

Want To Follow Nick, Give His Books A Shot, Or Find Out More About Him? You can do that here: Amazon / Twitter / Blog / Website /
Book Reviews