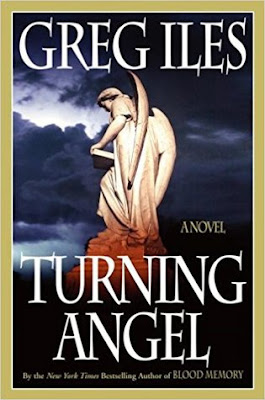 The Blurb
Turning Angel marks the long-awaited return of Penn Cage, the lawyer hero of The Quiet Game, and introduces Drew Elliott, the highly respected doctor who saved Penn's life in a hiking accident when they were boys. As two of the most prominent citizens of Natchez, Drew and Penn sit on the school board of their alma mater, St. Stephen's Prep. When the nude body of a young female student is found near the Mississippi River, the entire community is shocked -- but no one more than Penn, who discovers that his best friend was entangled in a passionate relationship with the girl and may be accused of her murder.

On the surface, Kate Townsend seems the most unlikely murder victim imaginable. A star student and athlete, she'd been accepted to Harvard and carried the hope and pride of the town on her shoulders. But like her school and her town, Kate also had a secret life -- one about which her adult lover knew little. When Drew begs Penn to defend him, Penn allows his sense of obligation to override his instinct and agrees. Yet before he can begin, both men are drawn into a dangerous web of blackmail and violence. Drew reacts like anything but an innocent man, and Penn finds himself doubting his friend's motives and searching for a path out of harm's way.

More dangerous yet is Shad Johnson, the black district attorney whose dream is to send a rich white man to death row in Mississippi. At Shad's order, Drew is jailed, the police cease hunting Kate's killer, and Penn realizes that only by finding Kate's murderer himself can he save his friend's life.

With his daughter's babysitter as his guide, Penn penetrates the secret world of St. Stephen's, a place that parents never see, where reality veers so radically from appearance that Penn risks losing his own moral compass. St. Stephen's is a dark mirror of the adult world, one populated by steroid-crazed jocks, girls desperate for attention, jaded teens flirting with nihilism, and hidden among them all -- one true psychopath. It is Penn's journey into the heart of his alma mater that gives Turning Angel its hypnotic power, for on that journey he finds that the intersection of the adult and nearly adult worlds is a dangerous place indeed. By the time Penn arrives at the shattering truth behind Kate Townsend's death, his quiet Southern town will never be the same.


My Review
This book was absolutely amazing. Although it is not the first in the Penn Cage books, I had no trouble keeping track of the characters or following their various back stories. Turning Angel isn't my first Greg Iles read, either, and I have to say, I am seriously loving his style. His character dialogue feels real and natural, the interaction between characters feels life-like and entirely possible, and the characters themselves are well-planned and beautifully rendered.


Turning Angel is a hefty volume for some readers, with over 600 pages, but I seriously devoured this book in about three days of marathon reading. The plot drew me in immediately, the writing itself was perfectly descriptive without being too much or too little. The blurb describes the story well, so I won't go into too much detail on that, but seriously ... wow. Just wow. I will be looking forward to another Greg Iles book as soon as I can fit one into my schedule.

Five Stars. You have GOT to Buy This Book.