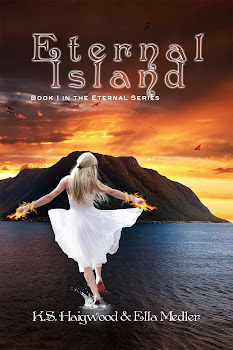 *About The Book*
A place where vampires rule, witches play, danger lurks and dreams really do come true.

Eternal Island is a paranormal suspense novel, deeply rooted in myth. Vampires and magic for a unique backdrop to a love story with long reaching consequences. Human girl Ariana Lochalan finds herself transported from the relative calm of her "Nowhere, Arkansas" life into a diametrically opposite existence when she discovers she is a powerful witch and meant to wed High Vampire of Eternal Island, Abe Cambridge. Despite first-sight magnetism, the two protagonists are being pushed apart, obstacles tripping them at every step, outside forces interfering and threatening their peace, and ultimately their lives. A world rich in magic and intrigue, Eternal Island is the first installment of a saga which has love at its core and delves through the mire that is human nature in a turmoil of feeling and emotion.

Would courage, resilience and love be enough to bring together two soul mates?

How much would you sacrifice to save the one who owns your heart?

*My Review*
*I absolutely have to say that I do not feel that the blurb matches the book. At all.*

Sure, they possess the power, speed, and bloodlust of the typical vampire, but the vampires of Eternal Island also possess a Cullen-esque desire to live in peace with humans, to interact in harmony. This is achieved through the use of "meekers," humans who willingly serve their veins to vampires, in exchange for ... well those particular details probably vary by transaction.

Anyway, the story starts out with Abe, the leader, the King of Eternal Island, speaking with his psychic, who is breaking the news that he's about to meet the love of his life - after a nearly 950-year existence, during which Abe has come to the mistaken conclusion that love is simply not in the cards for him. Through some plotting and devious twists in the story, Abe is forced to fight for Ariana again and again - while Ariana is busy learning that she's stronger than she ever imagined.

As I said before, the concept of the story is clever and creative, but the execution and the editing leave something to be desired. This is clearly Haigwood's first effort (especially when compared to her other works) and doesn't truly showcase her ability - but then, having read many of her other books, I can testify personally to her growth as an author, as well as to her increased dedication to more thorough editing. With a determined effort to re-edit this book for punctuation and pronoun usage, it would garner at least four stars for creative zeal and an interesting cast of characters, though I would have enjoyed them better had they been more thoroughly developed. As it stands now, the errors left in the book, combined with the lack of more meaty character development, leave the book with a "so-so" rating.

Still, I do plan to continue with the next book in the Eternal Series, Eternal Immortality.
In the meantime, 3 stars for Eternal Island.
Want to give this book a shot? One-click it easily on Amazon.