On July 12, 2014, I attended my first signing event, and let me tell you, it was an amazing experience. I'll admit, I'm totally addicted and can't wait to do it again! But before I can repeat the awesomeness, let me tell you what it was like.

The lead-up to this event took months of planning and preparation, ordering books to keep on hand, shopping for swag, and trying to think of a way to stand out. I googled like a fiend, trying to find photos of author tables, making notes of what I did or didn't like. But really engaging pictures of author tables were surprisingly hard to find (at first), and after a while, I just went with my own instinct. I had a basic plan (some of which didn't come to fruition, but we'll get to that later), and figured that once I was standing in front of my table, I'd just know what I wanted to do.

The week before the event? Panic. I was terrified. What if I don't sell any books? What if I sell all of the books and people are mad that I've run out? What if no one talks to me? What if too many people talk to me and I get overwhelmed? What if I'm too open and I say something unprofessional? Or - oh dear God - what if I'm nervous enough to seem standoffish or unapproachable!? And the thing is, that's just normal angst - lots of other authors were worried about the exact same things.

But I had it all in hand; I had an awesome assistant (my cousin, Dana) who knows me better than anyone, and she would be there to talk to me if no one else did, or to help me manage things if by some chance I ended up with a line. It was gonna be great. Until her car broke down. Again. Panic.

And then I thought my banner was lost. More panic. But then the banner was found, Dana had her car fixed on time, and all was well.

Until it wasn't again. On Saturday morning, I woke up late, pep talked myself through the shower, and packed my makeup and hair iron, since there was no way I had time to do it before getting to the event venue on time - I'd promised a few people I'd be there by nine, with time to assist them with last minute things. Of course, that promise was out the window - I was lucky to be dressed and combed! On the way to the venue, I made a pit stop for safety pins, just in case I really couldn't figure out a better way to hang my banner, and it was in the parking lot that I got the call from Dana. Her car may have been fixed, but her son was sick.

She. Wasn't. Coming. I was on my own. At the last minute. Not even close to ready. And running out of time.

Lucky for me, my kids' dad is kind of an a-type alpha guy. He calmly rolled his eyes at my nervousness, said something like, "Don't worry, you'll kick ass anyway," and proceeded to make everything awesome. He hauled boxes of books, bookmarks, rack cards. He hauled bags of book stands, candies, vases, bowls. He hauled the banner, and then hung it up for me. While he did that, my kids really stepped up and went into perfect-angel mode, chilling quietly together at the table next to mine while I alternated between confidently setting up my table and nervously rearranging everything fourteen bazillion times. Eventually, I had two uncharacteristically perfect kids, an overheated, really tired guy, giant frizzy hair, an embarrassing naked face too red from being nervous and overheated, gratitude for the power of Degree deodorant, and this: 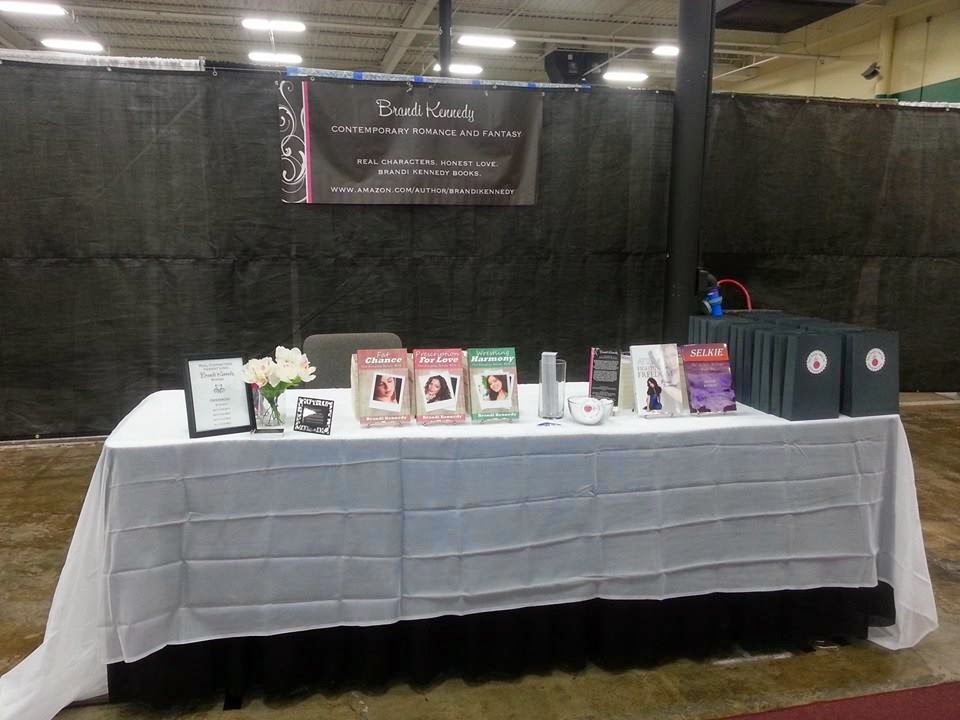 I never did get to iron my hair (or that tablecloth), or put on my makeup. Thankfully that line I was so afraid of didn't really happen (more than the one time) so I didn't have to worry about being overwhelmed, which allowed me to be really thrilled to have people come up to me who had read my books, who knew who I was. And it was really cool to take pictures with fans of my books! I signed bookmarks, tote bags, photo mats, e-reader covers, and yes, books. None of the things I was afraid of came to pass, and I even ended up with a really sweet volunteer assistant named Amanda. Throughout the afternoon, we kept my table pretty, we compared the hotness of the models, we chatted about books and some of the authors who were at the event, we had lunch somewhat carefully (in between readers), and we just generally had a good time.

Like I said, I'm addicted. I had so much fun meeting and interacting with other authors and some really amazing fans. I met a ton of really great bloggers, too! But I do still have some things left over, and you know what that means - giveaways! Want a chance to win a swag bag with signed bookmark, bio card, and a special surprise?

Enter below - you know what to do.
a Rafflecopter giveaway

Edited to add: Since there were so many entries on this giveaway, I chose TWO winners!
? Blog Posts