Several months ago, I was pointed toward the registration form for a lecture that Liliana was going to be holding in Indianapolis about self-publishing and where the industry is going. I know, it's not really something for readers, and maybe you guys aren't totally thrilled about this, but I was. The publishing industry has undergone so many major changes in recent years, especially in the quality and perception of self-publishing, and I was really curious to hear what a truly successful self-published author might have to share. You might be thinking that this really has nothing to do with you as a reader of my books, but hold on, because what I learned is going to make me a better business woman and a better author. This is of course very good for you.  *wink*

So, how was my trip? Well, I traveled with Felita Daniels, the mind behind Lilac Reviews. We made the drive from Knoxville to Indianapolis in pretty good time (five and a half hours or so, wow!), but we were both tired from the drive and I was getting a little hoarse from the abundance of great conversation! Five and a half hours of enriching talk over books, business, movies, and our own personal lives was enriching, but that was a lot of talk! 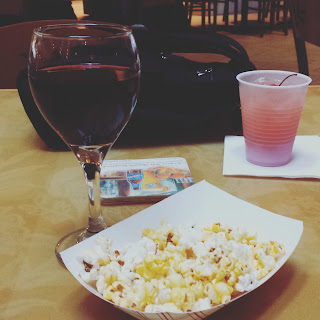 Our hotel had a small social/happy hour sort of thing going, so we stopped in the little kitchen area for complimentary drinks and popcorn, and then scrapped our original Friday night dinner plan in favor of somewhere closer to our hotel (which was amazing, BTW. Embassy Suites in downtown Indianapolis is both very beautiful and beautifully accommodating.). After asking for some recommendations at the front desk, we headed out.

Unfortunately, the restaurant we had chosen had a bit of a wait, and we were ready to find some dinner and put the night to rest, so we headed across the street to a little Italian place called Buca di Beppo that was serious perfect. Felita and I were sort of in awe the whole time we were there -- the entire place is covered from wall to wall (and almost floor to ceiling in some places) with small photographs and bits and pieces of art that ranged from beautiful to inspiring to amusing, and the background music is all bluesy and romantic. We were seated in a sort of back room, so we were led down the hall and past the kitchens, and we of course had our order taken by a top notch and very personable server who was a delight throughout the entire meal.

I don't think I've ever been in a restaurant setting quite like that one, and I'm not sure I ever will be again. Over dinner, Felita and I talked shop, the things that make a romance so appealing to romance readers (because it's what I write), and the things that make mysteries so mysterious (because that's what she writes). Over the course of a conversation about murder methods and the best choice of weapons, I began to notice that the waiters who had been singing along with the music while they swept under tables and rearranged chairs, had gone quiet. In fact, we were down to one waiter in the room, who was very silently and very quickly sweeping the floor while maintaining a noticeable distance from our table. Perhaps it was to give us privacy, but when I saw his eyebrows shoot up as the list of possible murder weapons grew longer, I couldn't hold back a laugh.

"Felita," I said, "I think we're scaring that poor guy over here." He commented that maybe we sort of were, since he had only caught bits and pieces that ranged from her son's experiences in military training to love and lust and murder motives and weapon options. We laughed and laughed, explaining that we're writers, and so then we had a great conversation that drew the service staff back to our table as we discussed the books one of the guys was reading (Omg, you guys, he had a Kindle In. His. Pocket. SWOON.), which eventually led us to a discussion of several movies I've now added to my "must-watch" list. Seriously, one of my best dining-out experiences ever. If you're ever in Indianapolis, don't forget to check out Buca's. It'll be worth it. 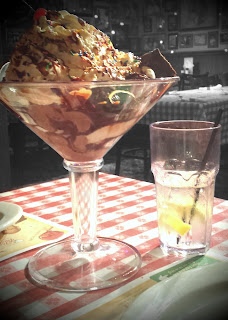 Anyway, from there we moved on to dessert. And let me tell you, when you read the dessert menu and it says "Colossal Brownie Sundae" ... they are not lying. Seriously, you guys, check that thing out! We saw it on the menu in a little martini glass and thought, "Oh sure, that'll be yummy!" And then it came. And for some perspective, let me tell you that that water glass next to the sundae is a normal-sized water glass. So, that sundae? Huge. We both ate two small servings out of it in an effort to make it worth the price, and we barely made a dent.

It was delicious, though, just like everything else. I still can't get over what a great little find that place was!

Saturday we woke up refreshed and happy, looking forward to attending the lecture. We headed downstairs to enjoy the most in-depth complimentary breakfast ever. Seriously, you guys, this wasn't just over-cooked hard-boiled eggs and instant oatmeal. I'm talking omelettes made to order and thick french toast with fruit and whipped cream. Yum.

Really though, that's all before we get down to the business of the trip. I mean, the drive up was great, the hotel was great, the food was great. But Liliana? I can't even. She's gorgeous, she's talented, and she's smart. She's really funny, she's business-savvy, she's inspiring. I took notes about running my business, writing and promoting my books, covers, and social media, and how and when to work certain other aspects of writing as a business that I love. Seriously, lots and lots of notes.

But now, because writing is my passion even more than it's my business, today I'm back to the grind, keeping two great main ideas from Liliana in the forefront of my mind. One, "Be Bold." And two, "Write The Next Book." So bye for now ... I'm off to work on applying what I learned, boldly writing what I think just might be my best book yet. And while I'm doing that, you might want to catch up on the Kingsley Series, because More Than Friends goes live on November 10th. 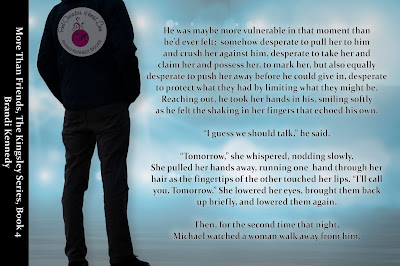