Review: 'Nobody' by Jennifer Lynn Barnes

By Unknown - October 05, 2015
I've had several people lately contact me for various reasons and tell me through the course of our conversation that they love this blog or they love my newsletter. They love that I talk about my books and keep everyone updated, but they also love that they get to delve into my personality and who I am as a woman in addition to my standing as an author.

I put a lot of thought into all of my posts, wherever I am (except for maybe my personal Facebook page, where I'm a little less censored -- or maybe a lot less censored). On my "Fast Four" (Facebook author page, Instagram, Twitter, Google+), I post a little personal stuff, but mostly I keep things short, sweet, and about my books. That is, after all, why you're there, right?

But now and then, I just want to share something with you. A song I love, or a show I'm watching. A quick quote that touched me, or a moment with one of my loved ones. Sometimes, it's a book. Like this one ... 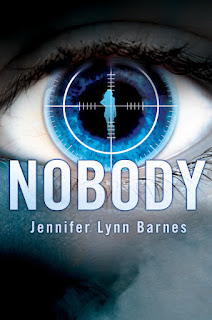 *About The Book*
The most dangerous people in the world ... are the ones you don't even see ...

Seventeen-year-old Nix is very good at his job. So when the organization he works for sends him after a teenage girl named Claire, he doesn't ask questions. He's a killer. She needs to die.

For sixteen years, Claire has led a normal life being overlooked. Her parents are absent. She doesn't have any friends. She has no idea what she is, or why anyone would want her dead. But she's about to find out, because from the moment Nix attempts to carry out his mission, the two are caught up in a conspiracy of murder, cover-ups, and betrayal.

Nix is a killer. Claire is his target. But when he sets eyes on her, everything changes, because only the two of them can truly see each other -- and two Nobodies are more than twice as dangerous as one.

*My Review*
Let me preface my review by saying that I do not like the blurb that's on Amazon. The blurb posted above is from the actual hard copy that I recently checked out from my local library, and is much better than the spoiler-filled one on Amazon. Just so you know. If my review makes you want to buy this book, avert your eyes from the Amazon blurb.

Let me just start by telling you that this book shredded me as soon as I opened it. I read that blurb about Nobodies, about invisible people, and I felt my heart wrench in my chest. Then I read about Claire, and I felt the corners of my mouth turn down with empathy. Not sympathy, not just sorrow for Claire, but empathy, the kind you feel when you actually know firsthand what someone is going through. Because I have been invisible. I have been unseen, unloved. Unchosen. And then. Then, I read about Nix. A boy who sets his eyes on a target and for the first time, he can't bring himself to complete his mission.

I read the story, and Claire ripped my heart completely out of my chest. Her angst began as typical teenaged self-pity, but it moved quickly into the deeper human longing to be loved and accepted, to be wanted and needed. And the wounds that gape open, bleeding and sore, in the soul of a person who feels invisible. Insignificant. Unimportant. This book shredded me, and it happened over and over again right from the beginning:
It happened as I got to know Nix, too:
And it just kept happening, little passages like this that spoke to the injured woman inside of me who has been lied to and cheated on and threatened and broken and broken and broken. Little passages that spoke to the woman inside me, the one who used to listen to Zac Brown Band's "Whatever It Is" and wonder what it must be like to have that, to have whatever it is.

Let me tell you, this book made me weep in the quiet dark of my bedroom, reading by the light of my cell phone held up to illuminate the pages of a book that I couldn't put down. I even related well to Claire's coping mechanism, the way she relied on imagination and her "Situations" and her love of books:
This book, you guys. The characters, the concept. The Nulls. The Nobodies. You just gotta read it. It's five stars. Five solid stars. I think maybe I'd have given it seven, or eight. Or ten. Honestly, I'm still not sure I'm done emotionally processing everything there was in this story, all the impact it had to offer. I know this book is a keeper, it's one that I'm going to go out and buy for myself. It's one that I'll re-read, and re-read again. But not now ... I'm too wrecked right now. Just totally wrecked.

And I love it.