Twelve years ago today my first daughter was born, and I became an entirely new version of the woman I was before the first breath of air kissed her skin. I forgot about my body and my insecurities, my fears and my inner demons. I forgot my past and for a while there was no future, as I looked down on the most perfect little thing God had ever deigned to create.

She had hair. She had the softest, blackest, most perfect downy baby hair. And her lips? Her little mouth was a perfect pink rosebud, and I spent uncountable moments just touching her. She had been well-scrubbed, as all newborns are, by the nursing staff who were the first to hold her close and see the color of life bloom in her face, but I was the first to bathe her in tears, and I have done it many times in the twelve years since her birth.

Blue eyes. She had -- and still has -- the most solemn blue eyes you can imagine, with a depth of age and wisdom that no child anywhere should possess. They've gone a little green over the course of her life, and now no one can truly be sure which color they truly are. But me? I don't need to label them blue or green. I don't need to know the name of the precise shade of hazel. I only know that I could look into a hundred sets of eyes at any moment and still know which ones were hers.

When she was two, she wasn't terrible at all. She was hilarious, with a boisterous laugh, a perfectly childish sense of joy and lust for life, and a vocabulary only a child of mine could have. The same kid who used big words like "medication" and "asinine" long before she could truly pronounce them is the same one who once laughingly called me a peckerhead when I splashed her in the bathtub -- and yes, I immediately stopped using that word. Mostly. I was so madly in love with her that at times, it was like the rest of the world didn't exist.

At four, she gave me a glimpse of what life would be like without her, and I hated every single second of it. We laugh now at the silly things she said under anesthesia and the way her body and personality changed after she had heart surgery, but the reality of those moments is still sometimes hard to face. As I sat beside her bed watching nurses prepare her for a procedure that was "routine" and "common" and "easy," I faced the hard reality of what it meant when I asked a nurse, "How do you know if the implant moves or doesn't stay where it should?" and she looked at me with serious eyes tinged with sorrow and perhaps a touch of fear, and said, "Oh, you'll know." Then she lowered her eyes and sighed, and left the room. I signed waivers that were pages and pages of legalspeak that meant, "I know my child might die today under your hands, and I trust you with her life."

I held her hand and kept my emotions in check even as my thoughts whirled out of control and my heart shattered into a million tiny jagged pieces, and I buried myself under the guilt of lying to her to keep her unafraid. She didn't even know she was having surgery, barely even understood that something was wrong with her. She thought she was having a sleepover at the hospital that would be fun and exciting, that when the doctors and nurses took her away from me, it would be so that they could teach her magical doctor secrets that mommies weren't allowed to know. She was thrilled and excited while I was terrified and struggling to stand up straight under the pressure. She was four years old.

At five, she met her new baby sister with grace and charm and maturity.  She helped with diapers and clothing changes, bathtimes, bottles. She and I waited alone when she was six and her baby sister went into surgery for the first time (ear tubes, poor thing), and she held hands with me across the waiting room table. 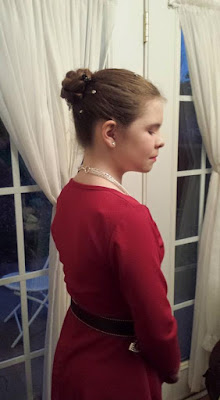 She didn't cry when she started school, but embraced the chance to grow and learn. She didn't cry (much) over bullies and doesn't cry (much) over boys. Instead she faces challenges head on, holds her head high at all times, and carries within her the same unbreakable, unshakable character that keeps her grandmother stubborn and her mother strong. She is largely unafraid (or maybe too impulsive for fear to take deep enough roots), full of life, and sparkling with the lust for experience that makes her who she is.

And she's twelve now, you guys. Not a baby, nor even truly a child anymore. She's smart and vibrant, quick and witty, energetic and outgoing and unbelievably beautiful.

She made me a mom twelve years ago, made me an entirely new kind of woman, a stronger person, willing to set and defend boundaries to shield and protect her, willing to weep and bleed and fight to see that her needs are met. She made me believe in something I wasn't sure I could ever be, made me push forward on days I was sure were too hard.

She made me a chauffeur, a teacher, a nutritionist, a security guard, a counselor. She taught me to be a macaroni chef, allowed me to be a cheerleader, and encouraged me to be a storyteller. I have at times been the lifeguard, the boo-boo fixer, the battery replacement expert. I have been the event planner, the interior designer, the personal shopper, the chamber maid.

But she? She has been entirely more than the sum of all those things to me. And as she takes steps into her teen years and begins to embrace herself as a young woman, I'm incredibly proud to get to stand beside her, smiling over her progress and coaching her through the times to come.

And embarrassing her every so often with posts like this. You should see what I wrote in her birthday card.
Blog Posts