What's In My Bag?

By Unknown - July 16, 2016
Each week, I post a discussion question in the secret Facebook group for my street team. The topics vary greatly, and aren't generally book based -- but they're a fun way for my team to get to know me, for me to get to know them, and for them to get to know each other. So far, it's a small community, but as it grows, I want very much for this group to be a close one. I never intend for the group to grow beyond fifty members in its lifetime, so it's important to me that the team be a happy place where we all get along and respect each other. (Interested? Apply here.)

Anyway, a few weeks ago our question was about time-wasters. We talked about various games, apps, and TV shows that we waste time on, which are our favorites, and which ones are more of the "guilty pleasure" variety.

One of mine is YouTube. I love vlogs, and I love the comic rant-style videos. I also like several different challenge styles, and I always love the videos where someone is trying to eat something gross or foreign for the first time. I shared some of my favorite YouTubers with my team members and why I love them, but one of the things I forgot to mention was how very addicted I am to the videos that are called "What's In My Bag?"

I don't know what it is, I don't know why I love them so much. But it's like chips, right? I can't just have one. It's usually one of the channels I subscribe to that starts it ... they post a "What's In My Bag?" video, and then there's another one in the space where YouTube suggests other similar videos. So I'll watch one, and then I'll see another that looks interesting, so I'll watch that too. And the next thing I know, an hour of my life is gone forever, and all I have to show for it is the knowledge of what's in a bunch of women's purses.

I thought, since I love that so much, and since you guys mostly like me (at least, I think that's why you're here ...), I thought it might be fun to give you a list of what's in my bag. 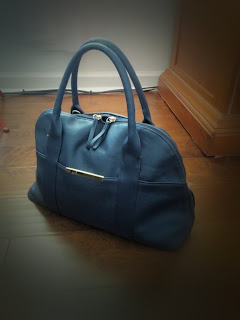 So here goes. First off, here's my bag, which my cousin likes to not-so-jokingly refer to as a suitcase, mostly because it might be big enough to qualify as a carry-on. It's a good size. Fits a lot of stuff. That's probably why I laugh back and tell her she only thinks my purse is big because she can somehow manage to fit everything she needs into a cell phone wallet. I don't know how she does it, but I suspect it has something to do with this.

Whatever it is that makes her have the ability to do that, I do not have the same ability, or maybe I just lack the ability or the level of chill required to actually "travel light" instead of just wishing to. Still, there's a certain level of magic in my little handbag, magic that comes in quite handy for me. The bag itself is a bit triangular in profile, and once you open the zippers, it has fabric bits on each side that allow the bag to open WAY. UP. Like for real, this bag is pretty tidy looking on the outside, but it is ROOMY on the inside. You probably wouldn't believe everything I can fit in there. So anyway, let's open it up, shall we?

What's In My Bag?

Still, my purse really is pretty roomy, and I regularly have any other number of other things stuffed in there. So let's keep looking.
There's a little zipper compartment in the side of the bag that has these things in it:
As if that weren't enough, I keep a small makeup bag in my purse. It's actually a fabric pencil case that I picked up at Walmart a while back for a dollar, but it fits everything I "need," has lasted for a long time, and serves its purpose nicely. Inside, I have:
And then, to finish off, I also have thirteen lipsticks and glosses in varying brands and colors:
Oh, and some Tootsie Roll pops, because I'm addicted.

Wow, it's no wonder my purse is heavy, huh? I thought about doing this as a YouTube video, but then I knew I'd get off on a tangent and the video would be three years long. I guess I could do a snapchat story though (I'm BrandiKennedy84 there) ... If you think I should, then add me on snapchat and snap me a photo or video to show me ... what's in your bag?

Until next week,
Happy Reading,
B.
Blog Posts