By Unknown - August 20, 2016
Well, there's a word I never thought I'd need to learn to spell. Anyway. I've had a stressful week. Those of you who follow me on Facebook possibly saw my post on my author page about my mother having a stress test done this past Tuesday, and any of you who have gotten to know me on a more personal level know that I tend to be more than a little anxious about my mother's health. 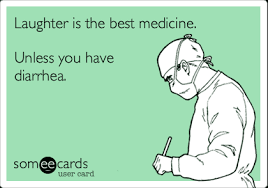 But that old phrase about laughter being "the best medicine?" It's true. I mean, it really is - there's nothing to cure your ills like a good hard laugh with a friend. Unless of course, you have really, really, REALLY good reasons not to laugh. Like the one mentioned in the meme to the right .... then maybe you shouldn't be laughing just yet, let alone snaughling.

All that to say this: I haven't done as much writing this week as I have in weeks past - certainly not as much as I had wanted to, because there's just been so much going on. Mom stuff, kid stuff, back to school stuff. Prepping for the Thunder Road Author Rally in Maynardville on September 10th ... 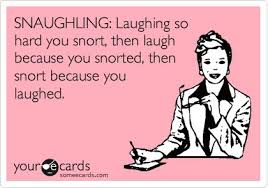 Sometimes, I even go all out and veer into outright snaughling. But never snaughlatuling. Because come on you guys. I'm a f@ck!ng lady.

Anyway. Last September, I gave you guys a list of ten things that piss me off - so since I've been self-medicating with snaughter (?) so much lately, I thought I'd counter that list with this one, a list of ten things that make me laugh. All of the links below will take you to video or video playlists on YouTube, because that's where a great deal of my laughter comes from (when I'm seeking it out on purpose, that is), and that's where most of my laughter morphs into high pitched wheezing with bulging eyes and streaming tears, aching belly muscles, and a right sexy phlegm cough.

Click the links below; it's well worth your time to learn the fine art of snaughling for yourself.


10 Things That Make Me Laugh

01.) The "Idiots of the Internet" video series by Joe Santagato. Seriously, this guy bashes his own head in a closet door out of frustration. He shoots himself in the face with a water bottle. He falls over a chair. It's good times. Plus he's dreamy. I mean seriously, that smile, though.

02.) The "Mad Libs Madness" video series, also by Joe Santagato. Joe and his brother fill out mad libs together, and then read them back, but with a twist. Whoever is currently listening to their mad lib has to have their mouth full of water or something. The idea is that this should keep them from laughing, but ... well, it obviously never works. I've seriously laughed until I almost threw up watching these.

03.) The "Watch Ya Mouth" video series, also by Joe Santagato. Have you caught onto the theme yet? These videos also feature Joe's other siblings, and they are a hilarious bunch. This series is also a sneak peek / advertisement for a game called Speak Out, which is a new Hasbro game. I'm almost positive this isn't coincidental.

04.) "People of Walmart." This one is another Joe Santagato video series. I'm not even kidding you guys, I can watch these over and over, and he never fails to make me laugh. And there's still that whole "he's easy on the eyes" thing, so ...

Joe uploads a new video every week, and I am almost always laughing so hard I'm crying after watching his videos. He's my number one most favorite comic YouTuber, and he also has a podcast, which is usually linked under all of his new videos. If you decide to go check him out and you think he's as funny as I do, leave a comment on his videos and tell him I sent you because he always makes me laugh.

05.) This video of babies laughing. How could anyone watch this and not laugh with/at them?

06.) These animal jerks. Because sometimes, animals can be jerks.

07.) This video series of Ryan Abe eating things that make him react in the THE most hilarious ways. Ryan is really sensitive to certain flavors and textures, and his reactions to eating things he doesn't like are hilarious! I'm not sure why this video isn't part of the playlist, but it's totally worth watching.

He's also a total sweetheart with a really soft side. I love his videos, whether I'm laughing or crying with him, and I always find him entertaining. Same as with Joe ... If you go over and check his videos out, please leave him a comment and let him know I sent you because I love his channel.

08.) Here's another thing, celebrities reading mean tweets about themselves. Honestly, these make me laugh sometimes even if I don't know who the person is.

09.) But you know, I'm not a famous person. No movie star, actress, athlete. No major celebrity. But hey, we authors get mean reviews instead of mean tweets. Here are some thick-skinned authors reading mean reviews hilariously. I've even thought of doing a video of this myself.

10.) And last but not least - when I was growing up, I seriously loved watching America's Funniest Home Videos. Truthfully, I still love watching bloopers, fails, and other videos in that style, so I just couldn't leave out my favorite fail channel and their Mega Fails of the Year playlist.

And just in case none of those videos did it for you, try this. Or this. I can't even tell you how much I love looking at those memes. But alright, now that I've giggled my way through building this post for you, I've really got to go get some writing done. Until next week ...

P.S. If you wanted to see other lists like this one, check out my master list of Top 10 lists here.
Blog Posts Top Tens