By Unknown - August 06, 2016
I'm not sure if you guys all know this or not (because I'm terrible about that sort of thing, I tend to just put things up and hope you see them), but I have a street team. It's called the BK Bookies, and it's just a little group of people close to me, people who love my books and want to help me make sure my work is getting out there. My team members get to be part of a secret Facebook group; each week I post a conversation starter to help us all get to know each other better, and I also post a focus task for the week. Doing the focus tasks earns members points toward a Christmas box full of fun surprises at the end of the year -- the member with the most points wins the box, and the only thing really required for membership is that members read and review my books!

I've been having a great time getting to know the members of my team, small as it currently is, and the intimate setting of our Facebook group has allowed me to foster relationships with the people who love my books the best, including Jodie Pierce, a sweetheart of a woman who also happens to be an author. We haven't met in person yet, but I can tell you that distance truly means nothing. Jodie has been a valuable addition to my team, despite the effort it takes to build her own writing while maintaining her personal life AND acting as the sole caretaker to both of her parents for the entire time that I've known her. Recently, Jodie lost her father in a tragic complication of his already fragile medical state. It broke her heart, and she has had to walk through the days that followed without him, holding herself together like a champ in order to continue caring for her mother. And yet ...

This woman has continued not only to be a valued friend who has become an almost-daily fixture in my life, but she's also continued to support my writing in a way that touches me to the soul. She has been a beautiful addition to my life both as a street team member and as a friend, and she is incredibly thoughtful.

Just a few weeks ago, Jodie told me she'd sent me a package in the mail. Just because. Now, I've quietly kept a PO Box for a couple of years at this point, mostly because having an address is a requirement for my newsletter, and I didn't want to put my house on it (you can never be too careful, hmm?). I mention it from time to time, but for the most part this little PO Box has been sitting there quite neglected, mostly unused by me and often stuffed to the brim with random junk mail. I've used it a few times to collect donated swag items or books from fellow authors for various contests and such (some of which I actually still have bits and pieces of since I got so much) but for the most part, I check it less and less often because I expect nothing of value to be in it and really, who needs more catalogs?

But then when Jodie was planning to send me a just-because-she's-awesome package, she asked me, "Hey, what's your address?" and it occurred to me that maybe some of you guys might want that address too. Maybe some of you didn't realize that it's listed in my follow section, or just hadn't had the time to notice that it's listed in the bottom of my newsletters with all the other general information most of us never look at (me included). I assume a good number of you don't really care, but I thought I'd share my PO Box here, just in case there are readers among you who want it and maybe were afraid to ask or something.

Also, in the interest of another of my favorite kinds of YouTube videos (For some reason I LOVE watching mail vlogs where my favorite YouTubers open their mail from people who watch their videos. I'm so nosy.), I'm going to show you what I got from this incredible reader who has become a valued friend. 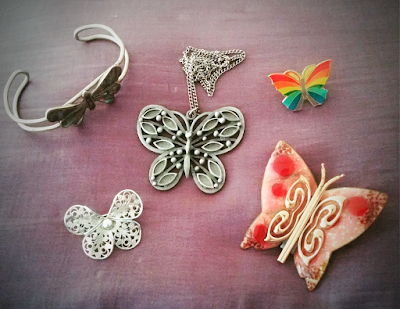 I've already worn the silver butterfly necklace ... I opened my package in the car and couldn't resist putting it on in the car right outside the post office! The other pieces are beautiful pins that I'll treasure always, and probably wear when I'm out and about; I think they'll look pretty on some of my sundresses! I'm still sort of in shock that she sent me such beautiful things, just because. They still make me smile whenever I see them.

Thank you, Jodie. You're a beautiful person, and I'm so grateful that books introduced us to each other ...

And speaking of books, I've got to go work on finishing Selkie II! The book is currently just under 60k words, and I hope you'll be reading it soon -- but while you wait, don't miss your chance to catch up on the Selkie Trilogy by picking up your copy of Selkie today. I just know you'll love it.