StoryTime: "A Grasshopper Almost Killed Me"

By Unknown - August 13, 2016
This past weekend, a grasshopper almost killed me.

Most of y'all know that my mom is in bad shape. She has Congestive Heart Failure and COPD and Diabetes and Osteoporosis and about twenty other things that all have a strong impact on her daily life. My mom is just 58.

So anyway, this past weekend I took the girls and we went over to hang with her, drive her to the grocery store, and push her around while she told us what to toss in her little wheelchair basket. Joey was driving her through Kroger (because after almost running Eden over at Walmart once, Mom refuses to drive herself in an electric wheelchair), and everything was going great - we had just passed the cakes and breads in the bakery, picked up a coffee cake I was afraid she'd devour the second we left her house, and moved toward the grapes. My mom really loves grapes.

Well, Joey let go of the wheelchair handles to grab some grapes, and I had headed toward the peaches. Mom loves those too. So when Joey turned around to go back to driving, she said, "Oh, I think there's a bug on this chair." Which is where it all started.

I whipped my head around, Eden started chattering about if there was a bug or not, and my mom started squirming in that wheelchair like she was about to wet herself. She kept muttering, "Get it off, get it off," and acting like she wanted to get up out of the wheelchair. Ordinarily, she could - my mom can walk and talk and everything, she's just really fragile and uses a cane because she is super clumsy. Plus the wheelchair was ... on wheels. And the basket thing attached to it goes right over the person's lap. So thank God it wasn't full at the time because she'd have thrown groceries all over the floor and we'd have made a scene.

Anyway, now Joey won't even approach the chair, mom is slowly rolling it in a jerky little circle as she tries to escape, and I'm scared to go closer because ... well, what if there really is a bug?

So I take the coffee cake out of the basket, hand it to Joey, who is about to bolt across the store, and lift the basket so I can let my mom out of the chair - while holding myself back from bolting across the store. In the meantime, Eden's still standing next to me (she was really cuddly that day and stayed very close to my side) chattering away. Nonstop, as is her style.

When I got my mom out of the chair, we were too far to walk back to the door, so I left her with Jo, and Eden and I headed back to either trade out the wheelchair, or find something/someone to get rid of the horrifyingly large grasshopper. 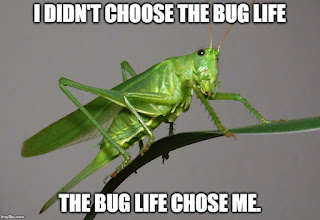 For any of y'all who don't know me well enough yet to imagine this, the idea of me pushing that wheelchair through the Kroger while in panic mode with a seven-year-old almost literally attached to my ass is utterly laughable. So ... here I go, pushing this chair, holding it by the one handle that isn't near "the bug," trying both to stay as far from it as possible, and be fast before my poor mom can't wait anymore and her legs give out.

So we make it back to the door, where I see that there are no other chairs to swap out with. I'm stuck with the damn chair we have, Grasshopper Model #437. Great. So we get into the little vestibule, and Eden immediately takes off to buckle herself into one of those cart things that has a car on the front of it for toddlers to ride in. I snatch a sale paper from a table by the door (where the woman in charge of handing them out was laughing at me, by the way), and go outside to freak out while trying to get close enough to slap that grasshopper without being close enough to have it jump on me.

Because I'm not kidding, if that thing had jumped on me, I'd have run streaking through that parking lot. Screaming. Flailing. Probably leaving a river a fear-pee behind me. Which wouldn't have been good because my kid, as previously mentioned, was stuck to my side that day, and would have probably followed me, also screaming. And wouldn't have looked for cars because when she hears, "Stop. Look. Listen," she thinks, "Ain't Nobody Got Time For That."

The grasshopper took my feeble swatting like a champ, and moved from the handle at the top of the seat to the wheel handle that you can use to manually wheel yourself. Terrified that he'd wedge himself in somewhere and prepare for a jump attack, I stepped up my swatting, no longer caring at all that I probably looked like a total idiot. 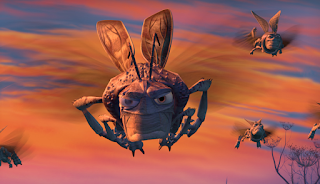 Did you know grasshoppers have wings? Well they do. And they can fly with them. Seriously. Look. So I'm swatting, trying to get this grasshopper to Go. Away. while worrying about what might be happening with my mom inside. She really is in bad shape, and I'm feeling guilty that I left my twelve year old in charge of her. Then again, she couldn't come with, and I couldn't leave her standing there alone. So I'm swatting. And that damned grasshopper spread his wings, and I squeaked so loud a man walking past me started laughing (he kept going though - so much for chivalry, right?), and took a tiny step closer. Eventually, he did jump off and go away ... but I'm not sure where exactly. For a big ass grasshopper, he sure managed to vanish without a trace.

By the time I got back to Joey and my mom - with Eden, sans grasshopper - my mom was leaning pretty heavily on her cane. We got her situated back in the chair, made it through the store, and had an interesting chat in the checkout line about Hillary Clinton that made me doubt my mother's sanity. We all survived.

But seriously, he tried to kill me. I almost died. Life flashed before my eyes and everything.

You believe me, right?