By Unknown - September 17, 2016
With so much talk lately revolving around various American athletes refusing to stand during the American National Anthem, I thought I'd get on here to talk about that topic.

What is an anthem, really? And why the heck is this whole thing so polarizing?

I've seen dozens of Facebook posts about it - some with memes, some without. Some were lengthy missives about the value of patriotism, loyalty, and respect. Many have been laced with offended and - some might say - righteous anger. Others were equally lengthy, but were more focused on the First Amendment right to freedom of speech, including the right to protest and speak out against the issues we as Americans disagree with.

The thing is, both points are right. We do have a right as Americans to speak out against the issues we disagree with. Our military has always been in place specifically to fight for and protect our freedoms, which include the right to express our opinions and views without fear of repercussion. But we also stand under the obligation to protect and respect the country that allows us those rights, and I personally feel that there are better ways to protest and exact change than to refuse respect for those who fight and die for this country.

Protesting by not standing during the National Anthem isn't the same as outright disrespect or disregard for our veterans and our country, is it? I don't know the political/patriotic views of the athletes currently in protest, and I won't pretend to - even while I openly disagree with their methods.

Still, I do disagree with their methods because for me, it matters. For me, it's so much more than "just a song." The National Anthem isn't just a song for me. It's not just pretty words strung together. A song, any song, is a certain magic; this song in particular is a celebration of the power of this country and the people who built it. It is, like the flag, a symbol of the gratitude and respect we owe to those who came before us, to those who stand between us and the dangers of the world outside our country. It's a symbol of the blood spilled and the lives willingly sacrificed so that American women could vote and American people could hope to learn to look past racial and cultural difference. And no, I know we aren't there yet. But the blood this country is built on deserves that moment of respect, and the servicemen and women who stand for the continuation of that progress deserve to be honored. It means so much more than words and music and a powerful voice. It's a simple matter of acknowledging the truth in the fact that we are "the land of the free" because "of the brave." It's so much more than just a song.

But you know what? I think there are a lot of people who don't really get that, who don't understand the magical power woven into a song like that - and for me, it's not even just that song. Music means so much to me - over the years it has become almost like a drug. I have to have it.

My first bluetooth wasn't so that I could talk hands-free on the phone. I didn't get it so that I could wash dishes while talking, or drive, or whatever. I wanted it so that I could carry music with me at all times. I wake up with it, I go to sleep with it. I write with it, shower with it. Pray with it. I love music from most genres, ranging from country to pop, to rock, to alternative, to rap, even a little metal now and again. I like classical music, too, just to soak myself in the joy of beautiful sound, with or without vocal accompaniment. 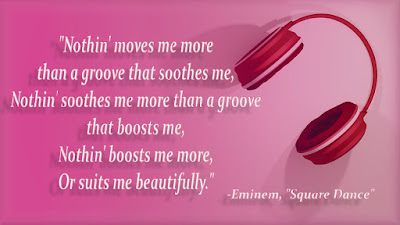 Recently, I discovered a song that spoke life right into the very deepest parts of my soul. My personal anthem, if you will. My personal life lately has been full of revelation, full of powerful realizations that have changed me as a woman in ways I can never go back from. I've looked upon certain people in my life with sudden understanding, knowing them for what they truly are apart from the outward image they present, and I've looked with heartbroken honesty on how my own identity is and has been impacted by the people I chose to allow into my life. Some of these, I look on with patience, or even gratitude, others I look on with shame and regret.

All of it, I look on with a heavy dose of brokenness, a sense of loss for what could have been, and a sense of sadness for what I can never get back.

I use music in my books too. In Fat Chance, Cass has what I think of as a power playlist, a list of songs she kept on a CD in her car, and she used them to remind herself of her own personal power, both in general as a human, and more specifically as a woman. They were songs meant to inspire strength and confidence, meant to give encouragement and power.

They were all pulled directly from my personal power playlist, and they are all songs that have touched me deeply over the years.

But they all paled instantly when I heard this one, this song of standing up and moving on, this song of living through the pain and holding a forward momentum despite the chaos you strive to put behind you.

Like the National Anthem holds a certain power for American patriots, even if not for the athletes that sometimes take their daily freedoms for granted, my personal anthem is a song that holds power for anyone who has ever felt victimized and found the strength to go on, for anyone who ever needed someone to come alongside them and say, "Yes, I've been there. You aren't alone."

Because I'm a different kind of warrior - but I am one nonetheless, and I hold that title with pride.