The Story That Started It All ...

By Brandi Kennedy - September 24, 2016
Those of you who have been following me for any length of time know all about my love for selkies. This mythical creature of ancient Celtic folklore has fascinated me for years, and so it only seemed natural to me that if I were to ever write a fantasy, they would be the creatures I chose to weave my story around.

In the fall of 2012, my mother was going through a cancer scare. She had already collected a series of serious diagnoses over the years, and still had lots of unexplained health problems. She was just barely in her fifties, and I was facing the idea of losing a mother who was already too sick to battle something as scary as cancer. She had to go through a bunch of testing, including a PET scan, and each new step was terrifying for her, for me, and for our family.

It was around that same time that I was exchanging life stories and writing ideas with a friend of mine. She was a phenomenal writer, and I'd been pushing her for some time to take her writing to the next level, but she was very introverted and preferred to keep her writing as something just done for pleasure, though she did tell me once how she longed to see her writing on a bookshelf.

Anyway, we had a conversation one day about taking the old stories and remaking them - the fairy tales, I mean. I tossed this idea around in my head for a while; I thought about what I might be able to do with Cinderella, or Hansel & Gretel. I thought quite a bit about taking one of those old tales and giving it a more modern twist (which is now being done often, actually). I'm not sure I even remember now how I made the journey from Cinderella to selkies ... maybe it was somewhere along the route of fairy tales to Disney movies, which would have taken me to the Little Mermaid, which perhaps took me on to the Celtic selkie, which I had heard of many times and always felt a particular attraction to. Either way, once I stumbled on that idea, I was off like a rocket, and I spent every spare moment that I had forming that story.

It was in the time of writing that adventure that I climbed out of the proverbial box I had always lived in. I always knew I was a writer, and I always knew I wanted to be an author. But I was a romance reader, and I wanted to be a romance author. "Write what you know," right? And after all, how could a straight-laced girl like me be a fantasy writer anyway? I haven't even seen Star Wars! And I don't like Star Trek. I wasn't that crazy about Lord of the Rings, either (although I did like those a bit). See, I'm really just a girl with a soft heart who loves a good love story.

But then I thought of another similar creature, one that I also love - the werewolf.

Dogs are my spirit animal, and there's no friend quite like a dog, so I can relate to the recent fascination in the book world with creatures that are so dog-like, even if they are often the wildest version of "dog-like" that we can imagine. And really, what is a seal, if not the dog of the sea? It is only fitting then, that when asked what a selkie is, I just grin and say, "The ocean version of a werewolf."

I think when I sat down with that idea and let it take over my world in the way that it did, I was running emotionally, from the prospect of losing my mother. We've never been close - many of you know that her second marriage was an abusive one and that my witnessing of her marriage is a large part of what led me (later on) to write Fighting For Freedom. Her marriage has had a lasting impact on our entire family, on who we are and how we relate to each other, as well as how our bodies and minds changed in response to our experiences. I was very young at that time, and very strongly impacted by the things I saw and experienced - and I think for a long time, a part of me took my mother's marriage personally. I harbored a lot of resentment for her choices for a long time, and I was angry that she didn't (or couldn't) protect my brother and I. But close or not, she is my mother, and she's the only one I'm ever going to get.

It was in the days of the cancer scare that my relationship with my mother began to lose some of its strife, and we learned a new way to interact and relate to each other - and since then, I have had my mother for four more years. Not that it's always peaceful, mind you, and I'm still watching her health fail at a dizzying speed - just in these last few years, she's broken her arm, her ribs, her collarbone, her hip, all due to complications of congestive heart failure. But despite those things and the stress of her circumstances, we work now in a way that we never did before.

Back then though, before we reached the point we're at now, I needed nothing so much as I needed an escape. Everything was changing, and not for the better - and I needed a place to let those things rest for a while, because they had begun to occupy my every waking thought.

Meeting Annie Jacobs, the heroine of the Selkie Trilogy, changed me forever. She changed my entire life, the path I was on, and the places I could see myself in. She gave me a career I never imagined actually having, and a sense of personal independence that I hadn't had before she came along. She gave me pride and vision and inspiration. She gave me courage and power to change the way I saw myself and the way I saw the people around me.

To Love A Selkie was my first novel, and I cried when I held it in my hands for the first time, hiding in the kitchen of the little apartment we lived in so that my family wouldn't see my emotion and tease me over it. But the emotion was there, welling up inside me in a way that could no longer be held back. To Love A Selkie was a first for me, the first completed work. That book was the solid, tangible proof that I could do it. That I could accomplish a goal as lofty as writing a whole novel. That I could live my dream. And that in watching me do it, my children would learn that they could dream too, under the belief that dreams are not only dreams. 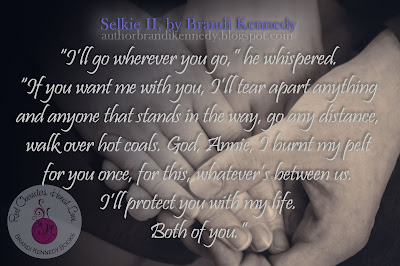