By Brandi Kennedy - October 08, 2016
The new school year is well underway, and my daughters are now in second and seventh grade. They're beautiful and headstrong, smart, and (at least, usually) kindhearted. They're good kids, good girls, each with a strong sense of modesty, each with a healthy dose of self-respect.

It's actually a running joke between my oldest daughter and I that I don't worry about her growing up, that I don't worry about her as a woman because I know she'll be just fine. She's got a tough exterior like her mother, and doesn't let herself be run over -- at least, not for long. The punchline of the joke though, is that it can sometimes be very hard to be her mother, because she doesn't let ME run over her, either. Still, it's her strong sense of self that gives her that confidence, and I'm not afraid to tell her how much I admire that in her. It's what keeps her from falling into the wrong crowd, and it's what will (I hope) keep her from attracting and accepting the attention of the wrong sorts of people as she gets older.

My daughter is like most other teenaged girls, bubbly and bright with an eye toward the trending fashions and an almost desperate desire to look "right" so that she can fit in. Still, she's fairly modest, especially when she leaves the house, and I'm proud of her willingness to keep the more private parts of her developing body private. She doesn't wear revealing clothes, not only because as a conservative mom I wouldn't allow it, but because she simply doesn't choose to dress that way. So I guess that's why I got so mad when I had to go to her school a few weeks ago to bring her a change of clothes.

She had gone to school in leggings and a longish t-shirt, totally covered from collarbone to ankle. No skin showing, and even her leggings were not skintight. In fact, they were loose enough that some people actually thought the striped pattern was there to mask non-existent rips just below the rear (there are no rips).

Mind you, I'm not talking about footless tights, the somewhat see-through, spandexy pants you buy in the underwear section that are meant to wear under a dress or skirt of some kind. No, I'm talking about leggings, the stretchy cotton pants sold literally three steps away from the stretchy denim jeggings that would fit exactly the same way and look exactly the same, except that they have butt pockets and they'd be heavier fabric -- which would be too hot and uncomfortable to wear in the late summer months. Leggings. Pants. Just pants. See? Look.

It made me angry to see that look on my daughter's face, to see her being accused of being "distracting" or "inappropriate" with her clothing. But I went to the school calmly, delivered a change of clothes for my daughter, who was terribly embarrassed, and brought her leggings and t-shirt back home to be put away. Without going off on anyone (if you've known me for long, you'll know why I'm so proud of that). But I was angry. As her mother, I was angry. This happened right about the same time the rest of the world was just as angry about this, and now let me address two other things:
Now, I'm no feminist (at least, not in the commonly perceived militant fashion of the term), but I believe rape culture is a real issue. When we hear of women who have been victimized, we say things like "well, she shouldn't have been drinking like that," or "well didn't she know if she wore that, she was pretty much asking for it?" We blame victims for not speaking out against this issue -- "It's her own fault, she should have come forward sooner." And we blame them when they do come forward -- "It's her own fault, she shouldn't have been-there/worn-that/slept-with-him-before/led-him-on/flirted-that-way/left-her-drink-on-the-bar," I've even done it myself at times, because I was taught the same thinking patterns that most other people are taught. And this is where the connection is formed:
But I didn't say anything while I was at the school. I didn't go in there and throw a useless tantrum that would further embarrass my daughter. I didn't make a spectacle of it in the moment. But because I was angry, and because I believe it to be a valid problem, I did seek out a public outlet to voice my concerns with the best sarcastic humor I could muster, to get it off my chest and also to finally join the conversation that's been raging around this topic for years. That was at the end of August, and I'm still angry.

It's nice to know that I'm not the only one, though. All over this country, there's a movement against overly restrictive dress codes and the messages that they send to our young women, and when I posted my rant on Facebook I was awed and amazed at some of the support that flew in. Sure, we got our share of trolls and haters, but that was to be expected. But what lit my daughter's face up in the days to follow was that we also got almost 250k views and nearly 3k shares. I received messages of support from countless people, was reached out to by several groups working to battle and change the restrictive quality of our school dress codes, and met Amanda Study, a brand new LuLaRoe consultant who wanted to show her support for my daughter in a tangible way. She reached out to me and shocked me with her kind offer to send my daughter two free pairs of beautiful LuLaRoe leggings, along with her encouragement and support to for standing up for my daughter. 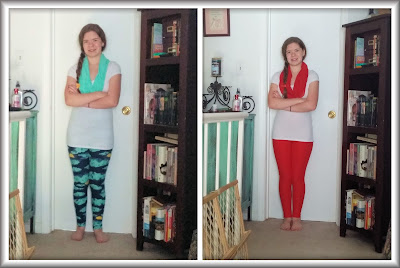 She's already worn the red ones to school twice, once with a similar t-shirt and once with a longer sweater dress (without getting dress coded either time) and the blue ones once (also not coded) -- and she looked beautiful, confident, and appropriately modest each time.

We're so thankful for Amanda's sweet effort to reach out and support us that I thought it might be fun to throw some of that support her way, too. LuLaRoe leggings are amazingly soft and incredibly comfortable as well as being easy to size and fun to wear. They aren't too thin, aren't too thick, and can be dressed up or down in fashionable ways the fit the current trends as well as any lifestyle. I'm planning to order some of my own (if I can ever get to them before they're always sold out!), and I thought some of you might like to try them too. If you haven't tried LuLaRoe's fabulous clothing line, please check out Amanda's Facebook Closet, a group she's opened in order to display and sell her product. Give her some encouragement, tell her I sent you, and show her some love by helping to support her brand new business! From one mompreneur to another, I know she'd appreciate it.
Blog Posts