I don't always mention this, and I don't usually ever make a fuss about it, because my connection to this day seems somehow fragile at best. I have two (mostly) healthy children, two beautiful girls who amaze me every day with their quick wit and their big hearts, and underneath my fervent wish that my children had been born with the ability to sleep in, I'm still thankful for them each time they wake up - because they woke up. When they bicker, I'm thankful that they have the energy to fight with each other, to assert themselves and their sense of independence. I'm thankful for the way they're comfortable enough to be who they are, even when it isn't always pleasing to the people around them.

But this gratitude, even on the days when I feel like the worst mom ever and I think that, just maybe, my two children are horrible little demon-spawn from Hell, is rooted in the remembrance that I've been pregnant three times. And I remember that my children, though they sometimes can be bothersome and inconvenient, exist because they were not lost.

Josephine was born when I was nineteen years old. When she was five, her little sister, Eden, came screaming into the world, bringing with her a chaos like no other. The two of them together are an exercise in everything girl, everything busyness, everything on full-speed and full-blast.

But before Joey, before the pregnancies that worked, there was one that didn't. The first time I got pregnant (at 18), I was a newlywed, excited to be taking the next step in my life, excited to be starting a family of my own. I stopped smoking. I stopped drinking. I stopped eating chocolate, swore off coffee, and spent lots of time reading books about pregnancy, birth, and motherhood. I stayed away from everything the books said was bad for my baby, took my vitamins like it was my religion, and closely monitored what my books said about my baby's development each week.

I wished fervently for a boy, a little boy who would be beautiful and perfect, who would someday by the very best big brother, who would be strong and fun and would always take out the garbage for his mommy. I was still in the first trimester when the bleeding started, and I still feel horrible about the things I can't remember in order to properly commemorate the child that never was.

I can't remember what my due date was. I don't remember the day the bleeding began, or the day it ended. I never knew if the baby was a boy or a girl. But it had ears. I'll never forget sitting in the exam room in the Emergency Department, with a cold obstetrician who calmly told me that, "Some pregnancies just aren't viable. Sometimes, it just isn't meant to be." I was alone, my husband was at work. The doctor moved on to talk about the possible need for a D&C, and I broke out of my grief-stricken stupor just long enough to beg him not to make me do it. I'd just been told that my child, the baby I had already begun to love and develop such incredible hopes for, would never cry, would never be born, would never be ... real. I couldn't fathom the idea of lying back on a cold operating table and having the remnants of that hope scraped from my body and discarded as if it had never been there.

I had heard the heartbeat already. And it had ears - I'll never forget the way that thought kept running through my mind. I had just read it in one of my pregnancy books the day before. My baby had ears, and I had been looking forward to playing music for it. But suddenly the pregnancy was over, the heartbeat silenced, the hope dashed.

The doctor told me that a D&C could possibly be avoided, if my body was able to "discard the tissue" on its own, and as I went home that afternoon, a pad in my panties to soak up the leaking remnants of lost life, I felt more broken than I'd ever felt before. And I was angry - I had done everything right, and what had it gotten me? Loss. Unspeakable loss, a sense of guilt and failure, empty hands, empty arms. An emptying womb. They sent a grief counselor in to speak with me; she brought me a little pin stuck on a card, a little silver pin in the shape of two tiny baby feet. I remember looking down at it, watching it blur behind my tears.

The next week (or so) was painful. I remember laying on my couch in the small apartment my husband and I lived in, crying, curled into myself, my womb screaming in pain, my heart broken in a way that felt like it would never heal. I went back to the doctor several times to have ultrasound exams, until finally the doctor sat back in satisfaction and declared - in the same cold, no-nonsense tone - that it was done. "Don't try again for a while though, your uterus still needs time to heal," he said, seemingly unaware of the stream of silent tears I couldn't hold back.

I didn't know anyone who had been through that, didn't know anyone who could have been there for me in the way that I needed someone. I got a lot of pitying looks and sorrowful, frowning versions of, "I'm sorry," that meant nothing to me. For a long time, I believed that the child had been a girl - a girl who had somehow known she was unwanted. A girl who died because I so fervently wanted to begin my family with a son. No one seemed to understand that, either, or why I felt so guilty over it.

It's been almost fourteen years now, and I still think of that lost child, wonder who he or she might have been, what things might be different about my life now if not for that devastating loss, if not for that moment when the emergency room technician sat back and stopped looking for a heartbeat that was no longer there. And in the years since, I've encountered young women experiencing that same loss with a frequency that makes my heart ache.

Some days, I don't think of it - the loss of that first child isn't something I choose to dwell on. But some days, the child is with me like a ghost, the almostness of its life somehow mocking. 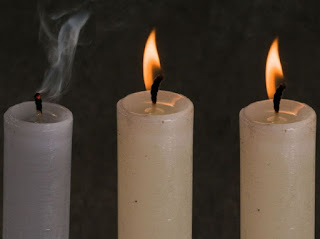 I still don't know which would have been worse: losing the child in that way, before my body changed with its growth, before I had a chance to buy it clothes, choose its name - or to lose it later, when I might perhaps have had a change to see it, to hold it, instead of wiping it away as if it were nothing.

I know I'm blessed, though, blessed with heartbeats that didn't stop, children that survived, children that have thrived and developed into little people I can be proud of.

Until next week,
B.