By Brandi Kennedy - December 10, 2016
Some of you know that I make it a point to review just about everything I read. I'm not as good about reviewing everything I listen to (like audiobooks and stuff like that), but I do try to review every book that I read, because as I've grown as an author, I've grown more and more aware of how important reviews really are.

But you guys, I am a PICKY reader. So many things irritate me, from insta-love to menage, to gratuitous sex and swearing to bad grammar and shady editing - many of which I have also fallen victim to. No one can be perfect.

Anyway. Because I'm such a picky reader, it's rare for me to finish a book and rate it with a five-star review, and I have be pretty impressed in order to give a five-star rating (partly because honesty is important to me, and partly because it isn't the stars that matter so much as it's the genuine feeling and the total number of reviews). So I thought, with the year coming to a close and a new year of reading upon us, I'd give you guys a list of my favorite five-star reads from this year - maybe you'll want to check them out for yourself.

Talk nerdy to me.

Samuel Tucker is absolutely the last person scientist Cassie Barclay would ever date. Yes, he's gorgeous, but he's also far too cocky for his own good and thinks that Pi is a tasty afternoon treat. So when he asks her to dance at her friend Reese's non-wedding she's wondering why on earth she says yes!

Tuck is used to people assuming he's all brawn and no brain, and amuses himself by winding Cassie up. But when he finally takes her to bed, suddenly it's Tuck who can show Cassie a thing or two! Can he convince her that love and sex having nothing to do with logic and everything to do with chemistry? 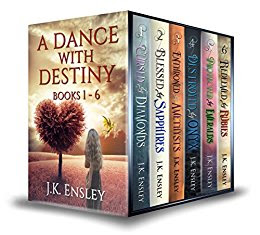 BOOK ONE: Every curse has a blessing and every blessing has a curse. When you stand face to face with your destiny, will you be able to tell one from the other? Good versus evil, daylight over darkness, Angels or demons ... the age-old epic battle rages through the universe. But, what if a pure and loving heart unintentionally caused Angels to fall, demons to rise, and blurred the line between heaven and hell?

BOOK TWO: Jenevier had bargained with God, tried to reverse the sun, erase her murderous crime. Alas, you must be certain you can pay the price before the bartering begins. After wrongfully killing Merodach, she trades her soul for his life and wakes up all alone in a strange new world. She must pay her price, learn her lesson, and discover her intended blessing before she can start over. But along with her epiphany, she'll find a whole new realm complete with its own set of problems. There's no perfect place in this universe because we're not perfect creatures. No matter where you find yourself, there you are. If you step into paradise dragging all your tainted and scarred baggage with you, then it's no longer paradise. Your flawed heart removes the bliss, negates utopia.

BOOK THREE: Swapping her mantle of ultimate celestial power for the miraculous blessing of a beloved child, Jenevier no longer wields the ethereal mask of Life and Death. Trading Netherhood for Motherhood, her quiet days are now filled with the blissful thoughts of a fairytale family and an unmatched joy ... the likes of which she never dreamed possible. The fractured love she shares with Varick has stood firm through the test of the ages. They have walked through the fires together and emerged, not unscathed, but gloriously scarred. When Fate rolls the dice once more, will the former Angel of Death be strong enough to meet the awesome challenge? Will she be able to see through the debilitating pain of loss, wipe away the bitter tears of betrayal, and grasp the incredible Blessing awaiting her? Or has extreme adversity left her too shattered and broken to fight back?

BOOK FOUR: After surviving an epic battle, an epic betrayal, and a heart-shattering epic loss, Jenevier is still reeling from the devastating pain. Setting the universe back to rights and calming the chaos left in the wake of her dark husband's wrath is all that's keeping her tormented soul from crumbling into tiny, irrecoverable pieces. She returns to her homeland with a glimmer of hope pleading loudly within her heart. With Alastyn by her side and Jezreel now happily wed to the elegant Elven Prince, Jenevier lets the immense joy of their long overdue reunion wash over her. Caught up in the euphoria of charmed love and amazing new revelation, she never sees the treacherous onyx-eyed little devil lurking about the ancient trees of Mangladune ... until it's too late.

BOOK FIVE: When the summons comes down to go to Earth, Jenevier doesn't bat a lash ... until Uriel says he is to accompany her. Nothing good ever happens when one of the Archs shows up at her door. Then again, she has never faced a trial quite like this one. Jenevier had oft been warned ... A single mistake upon the eighth layer can cause unfathomable consequences. She soon learns the painful truth in those words - choosing to go against Uriel's wise counsel proves tragic. Finding herself with no one else she can turn to, Jenevier joins with her bonded Dragon, Nilakanta, and heads back to the realm of Earth in hopes of mending what she inadvertently rent. Minus her wings and her claws, she vows to do the impossible. Alas, the situation proves just that ... impossible. In her darkest hour - absent friends and minus hope - Jenevier finds a surprising ally in the most unlikely of all Angels. Will her new savior help bring peace back to Earth ... or will he rain hell down upon it?

"I won't describe what I look like. Whatever you're thinking, it's probably worse."

August Pullman was born with a facial difference that, up until now, has prevented him from going to a mainstream school. Starting 5th grade at Beecher Prep, he wants nothing more than to be treated as an ordinary kid - but his new classmates can't get past Auggie's extraordinary face. WONDER, now a #1 New York Times Bestseller and included on the Texas Bluebonnet Award master list, begins from Auggie's point of view, but soon switches to include his classmates, his sister, her boyfriend, and others. These perspectives converge in a portrait of one community's struggle with empathy, compassion, and acceptance.

He doesn't mind breaking rules, just never his own. Rule #1: You don't seduce the woman you protect.

After the death of his wife and twin sons, Army vet Ian Slaney is a shadow of his former self. On the path of self-destruction, only his best friend's disappearance in South America pulls Ian back from the ledge. He rushes to Brazil, only to discover that his friend was murdered. The single lead in the case is also the single biggest obstacle - Daniela, a mysterious beauty very much in need of protection, with a host of secrets hidden in a dark past. As the two of them track down clue and try to untangle an impossible case, they draw the attention of all the wrong people, and danger follows them back to the US.

Ian wants the murderers. Daniela wants Ian to acknowledge the hot sparks of passion between them. But convincing Ian to set aside his protective instinct proves more difficult that teaching a water buffalo to tap dance.

Take yourself on an epic romantic adventure to another world, with a spellbinding story about love and hate, honor and evil, hope and justice set against the exotic backdrop of the teeming Amazon rain forest.

Colleen Hoover’s romantic, emotion-packed debut novel unforgettably captures all the magic and confusion of first love, as two young people forge an unlikely bond before discovering that fate has other plans for them.

Following the unexpected death of her father, eighteen-year-old Layken becomes the rock for both her mother and younger brother. She appears resilient and tenacious, but inside, she's losing hope. Then she meets her new neighbor Will, a handsome twenty-one-year-old whose mere presence leaves her flustered and whose passion for poetry slams thrills her.

Not long after a heart-stopping first date during which each recognizes something profound and familiar in the other, they are slammed to the core when a shocking discovery brings their new relationship to a sudden halt. Daily interactions become impossibly painful as they struggle to find a balance between the feelings that pull them together and the forces that tear them apart. Only through the poetry they share are they able to speak the truth that is in their hearts and imagine a future where love is cause for celebration, not regret.

Despite the tumor-shrinking medical miracle that has bought her a few years, Hazel has never been anything but terminal, her final chapter inscribed upon diagnosis. But when a gorgeous plot twist named Augustus Waters suddenly appears at Cancer Kid Support Group, Hazel’s story is about to be completely rewritten.

Insightful, bold, irreverent, and raw, The Fault in Our Stars brilliantly explores the funny, thrilling, and tragic business of being alive and in love.

And now that you know which books were my favorites in 2016, drop me a comment to tell me yours! After that, head out and pick these reads up for yourself - or a friend!

*Note: This post contains affiliate links. This means that if you click that link and purchase the product, I will receive a (probably very small) compensation. I am, however, committed to only sharing products I genuinely love and trust to be of great quality and value. Any opinions expressed are my own, are 100% honest, and are not affected by my participation in the affiliate program.*

*Also a Note: Due to unforseen personal circumstances, I will no longer be attending Romancing the Smokies 2017. I wish I could give more details about this, but if you've been reading my recent posts here, you'll know that things have been complicated in my personal live recently. I wish there was a way to promise you guys that I could make it work, but right now I just can't, and in the meantime I'm just trying to hold on for the ride. I'm still writing, but committing to attending an event of that caliber is simply more than I give right now. Believe me, I'm sorry.
Blog Posts Five Star Reads