Saturday Sentiment: A Letter to Sixteen Year Old Me

By Brandi Kennedy - March 11, 2017
My birthday was in February; I turned 33 this year, so I thought this would be a good time to write a letter to sixteen-year-old me. Yes, I know that if I'm dividing by two I'd be sixteen and a half, but by sixteen and a half the half didn't matter as much to me anymore, so sixteen it is.

When I was sixteen (and a half) it was the year 2000. I had just moved from Florida to Tennessee with my mom, and my life was changing in every possible way. The decision to move had been resting on my shoulders for a long time, and I hated the circumstances under which I was forced to make it; I hated saying goodbye to my friends (those to whom I even had a chance to say goodbye), and I was heartbroken that I didn't have a chance to say goodbye to my father. I hated knowing that I was leaving behind a solid network of beloved friendships, headed for the unknown where I would be The New Kid.

The only "plus side" to it was that my boyfriend was moving with us, and I was comforted by his proximity, by his presence, by the certainty that he would be someone familiar to me - someone that was on my side, in a place where I knew no one, a place where the surrounding family mostly didn't like me or approve of me because I was an overweight teen, because my mother is financially illiterate, because her financial ignorance kept us dreadfully poor.

When we arrived, my boyfriend was informed that he wasn't welcome after all, due to the two-faced calculations of certain members of my family. They had used him - he drove our u-haul up, and had even paid to rent it. Everything he owned was in it, along with mine and my mother's possessions. When we arrived, he was packed on a bus and sent away - and I was utterly crushed. I'd been shamed for even having such a serious relationship at such a young age, and my boyfriend was spoken to as if he were barely better than the dust on the ground.

He was sent to his mother's house several hours away, making it basically impossible for us to see each other anymore. We tried to maintain a long-distance relationship, but that was a lot harder back then - we didn't have social media and cell phones to keep us close. We had expensive long distance phone calls, and letters that could never be as personal as the close proximity we were so used to. He went to a party, got drunk, cheated on me with another girl. His conscience made him confess - he told me in a letter. We broke up.

And that's where I was in my life when I was sixteen and a half years old. Brokenhearted and displaced, an utterly lonesome and totally misfit teen. 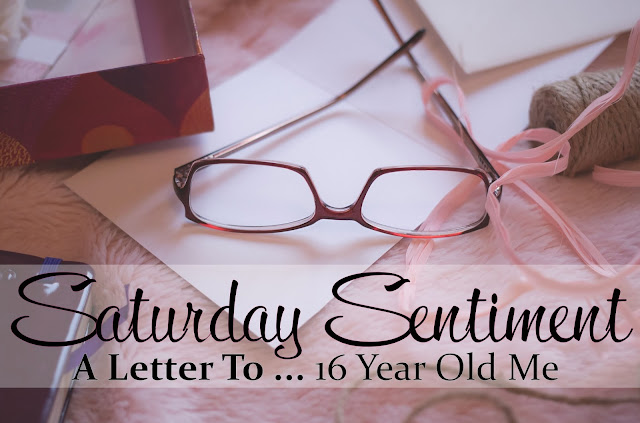 Everything's a mess right now, and I know that. You're scared and hurt, and most of the time, you feel like no one understands you. Most of the people around you seem to think you're too much of one thing or another, and the people who don't think you're too much seem to think you're not enough. Neither of these extremes is the truth, and the only thing truly wrong with you is that your life is filled with the wrong people. I wish I could tell you that this changes, but it doesn't.

For the next sixteen years, you'll continue to have people in your life that find and feed on your insecurities - and it will open you up to trouble of a progressively damaging nature. Get ready, because life isn't getting easier for you anytime soon, and you'll need to rally the inner fire that's helped you survive so long.

I know I could warn you of everything - I could give you the gift of foresight, and I could tell you what to watch out for, what to steer clear of, but I won't. Instead, I'll give you encouragement, because although the years to come will often be painful for you, they are necessary to create the woman you're going to be when you're me.

Hurting over the end of your relationship with J, you'll enter a relationship with a much older(than-you) man, and you'll think L is amazing and mature, steady and full of potential. He has his own issues though, and those issues are going to drive him away from you long before you're ready, so appreciate him while he's yours. Once he's gone from your life, you'll want to spend the next several years kicking yourself for answering the phone on the night that changed things between you and L, but don't fall into the trap of regret.

Even though you won't realize it right away, in time you'll see the truth of L's own insecurities, and you'll understand what made him too afraid to stick around - you'll see the echoes of his past hurt in that last phone call, and you'll understand. When you do, take the lesson from it and release the pain - some people are only meant to enter your life for a season. And as trite as it'll sound while you're crying over some of the best poetry you'll ever write, you'll still need to understand this: it's true that some things just aren't meant to be. Take the gifts L will give you - your new appreciation of the depth of your own feelings, and the realization of how important good conversation will be to you in the future.

Eventually, you'll learn some things through the grapevine that will make you grateful for when it ended - but don't let the pain of it ending negate the beauty of what it was. Plus, he's a spectacular kisser, and you'd better enjoy that while it lasts. You'll miss it like fire when he's gone.

Romance will come and go in your life, and each new relationship will teach you just as much about what you want in love as what you don't want. Be open to those lessons - they lessen the pain that will strike you as you enter some of the scariest days of your life.

Hold confidence - you can do this.

By the time you're me, you'll have experienced so many things - the excitement of impending motherhood, the crushing pain of miscarriage, the triumph of live birth. You'll know the exhaustion of new parenthood, the fear and uncertainty of divorce, the insecurity of single parenting, the excitement of new love. You'll reconnect with friends you'd thought long gone from your life, and you'll embark on a journey that changes everything.

I can't promise it'll all be good - in fact, I can promise that a great deal of it won't be good. But I can also tell you with the utmost certainty that you're stronger than you think, and that your ability to survive will inspire everyone who knows your story. I can tell you that you'll grow and learn so much, that you'll reconcile with God. You'll become the kind of strong woman that repels the insecure, and while this will be especially painful to experience, it will help you cleanse your life of toxic people.

It's going to be a wild ride and you're going to come out dizzy and damaged in so many ways - beaten and broken and lost. But you'll have learned so much over the years, and by the time you're me, you'll be strong enough (and finally confident enough) to reach out and look for help. You'll find the right diagnosis, four little letters that explain SO MUCH - and when those four letters finally click for you, you'll start an entirely new journey - one that will change everything, finally, for the better.