By Brandi Kennedy - April 22, 2017
My life is a busy one and I play a lot of roles on a daily basis. As a writer, I'm a blogger (lifestyle), an author (romance, fantasy, and suspense), a business owner, an entrepreneur. I'm an amateur marketer (with LOTS to learn), a networker (but not an extrovert), a (mostly boring) social media personality. As a mother, I'm a (strong) counselor, a (calm) taxi driver. I'm a (decent) cook, a (reluctant) maid, a (steady) shoulder to lean on, an (earnest) ear that will listen. As a woman? As a woman, I'm a (passionate) writer and a (steadfast) mother. I'm a (sometimes) knitter and a (sometimes) crocheter, I'm a (voracious) reader. I'm a (bad) singer who loves music, a (spastic) journaler who loves the freedom of writing things out, a (devoted) dog handler.

I love photography, art, fashion, makeup. I love movies and TV when I make time, and I really really miss watching WWE.

I'm angsty and angry and bored. I'm calm and confident - I'm courageous. I'm depressed and disgusted; I'm elated, excited, embarrassed. I'm frustrated. I'm grateful. I'm grief-stricken. I'm happy - and hopeful. I'm intense. I'm jealous, kind, lonely. I'm modest. I'm nervous, I'm obnoxious, I'm patient, I'm proud. I'm quick. I am repentant. I am sad, I am shamed, and I am sorry. I'm terrified. I'm unhappy - I'm vulnerable. I'm filled with wonder. I am xenial. I am youthful. I am zany. I am. I'm made up of so many things, so many little parts that all come together to make me this specific woman.

But if I had to pick one thing that really makes me what I am as a human, as a woman, as a mother, as a writer - it would be books.

So let me tell you a tale. A Tale of Two Books. 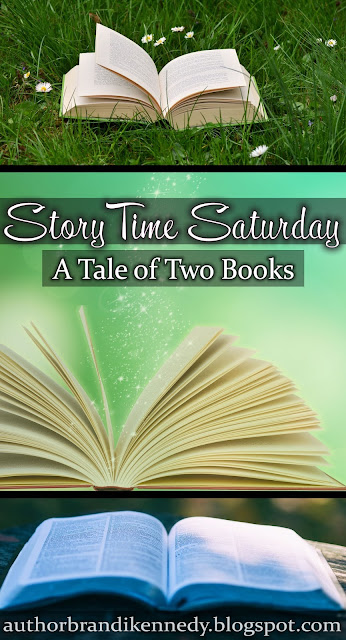 Long ago, in a time that should have been simpler but wasn't, there walked a damaged girl. Small of stature and weak of build, still she stood tall and struggled through the challenges she faced. Alas, she was a strange girl, full of inconsistency. The girl was sometimes too quiet, sometimes too loud, with a face that often looked on the verge of tears, with blue eyes already haunted at far too young an age. She was conflicted.

The child in her loved stories, but the woman in her longed for romance.

In a store she walked with her father, proud to be with him. It was in the time before their bond truly began to splinter, in the time when she would hold his hand and he would lead her, proud of her.

She asked to keep it - the request was granted.

The afternoon flew by for the girl in a blaze of pages; the beautiful flowing prose and magically musical dialogue of historical romance entranced her. The characters were a family - they loved each other, tenderly adored and fiercely protected each other. To the family in the story, the virtue and honor of their women - of their daughters - was of utmost value and importance.

For the girl, curled in desperate hunger around the book, this was a world unknown, an alternate universe - one very like her own in appearance, but with entirely new undertones.

There was a man in the story, a playboy ashamed of his parentage and acting like a petulant child long after the days when he should have stopped. Through a series of thrilling accidental events, the man ended up husband to the most beloved of the Mallory daughters ... and the girl, still curled around the book but now in abject fascination, entered a world where sex was different, too.

A world where sex was gentle and willing and tender. A world where physical affection was a good, safe thing, a world where people were allowed - and even expected - to be honest about their feelings, their needs, their desires. Their hurts.

The book haunted the girl, touching and influencing every part of who she became as a woman, from her need for earnest and open communication, to her lingering fascination with the muscular workings of the male body, to the type and style of sex that she preferred. Through it all, an expectation rested in the depths of her soul, a hope as fragile as a fog of smoke, a wish so fervent it could never even be whispered aloud.

Through the powerful influence of the first story, the girl birthed tens of her own stories. Dozens, hundreds. She wove her problems into worlds where problems could be solved, wrote her feelings into tangible things that could be dealt with, played with. Healed. Countless stories died at her hands, in her hands - more often than not, against her will, characters dissipating into frustrating nothingness, plotlines lost in the vomitus of too much narrative detail.

She fell in love with the power of words, with the artful arrangement, with the sense of mastery that filled her only when she sculpted simple words into colorful visions. The girl fell in love with the malleability of her characters, with the way she could dissect them to figure out how they worked, and learn to put them back together again, better than before - something she didn't have the skill to do for herself.

She became a woman - a woman touched by grief and greed, by tragedy and heartache. And in the midst of crisis, she brought to life another story ... one that survived. One that followed itself all the way through until the end, one that didn't wisp away on the wind like a dandelion seed in flight.

She took a myth, a legend, a Celtic fantasy, and brought it into the modern day, transformed it, gave it a flavor only she could sprinkle into the recipe that is a story. She created characters that feel, that smell, that taste, characters that joke and play - and hurt and cry.

That book - that second influential and incredibly meaningful story - sparked a flame that changed a series of lives, that moved a world of mountains, that provided a way for a lost girl to find hope. To create wholeness. To build "home."

These two books - Johanna Lindsey's LOVE ONLY ONCE and my own SELKIE - still mean the world to that girl. To that woman.