Thankful Thursday: The Importance of Support

By Brandi Kennedy - April 20, 2017
This post was supposed to be about gratitude, and I guess it still will be, in some ways. It's about support, and how important it is for us as humans to feel valued and cared for. To feel supported and backed up, to feel held by the arms of humanity, especially when we're in our most vulnerable state. 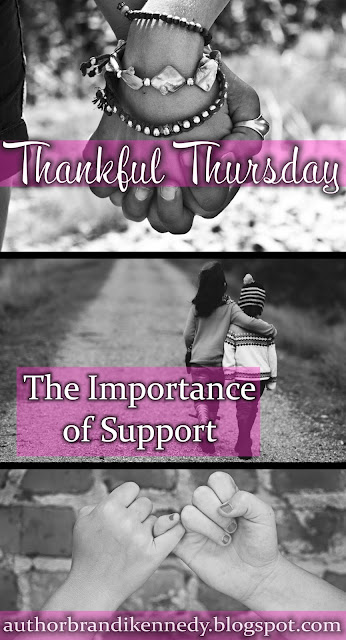 When I was a child, lacking the support of parents who made me a priority, I was targeted by people who abused me. I received support instead from the court system. I was moved into a group home. There wasn't enough room for me there, either. But they chose me, took me in, and made it work. I was placed in a house full of troubled teenaged girls - I was in third, maybe fourth grade. A kleptomaniac taught me how to shave my legs in that house - she and I shared a bathroom (we had Jack-and-Jill bathrooms on that side of the house), and when it was "lights-out" and our bedroom door locks were activated by the security system, we would sneak into that little bathroom together, block the crack at the bottoms of the doors with towels, and sit on the floor, chatting into the night. I wish I could remember her name. I wish I could know where she is, how she ended up. She was like a sister to me in that house - she was the one who made sure that when it was movie night, we watched Mary Poppins because she couldn't believe I hadn't seen it.

When I was a tween, newly removed from the group home (against my will, because I had felt safer in that group home than I could remember ever feeling elsewhere) and lacking the support of parents who could understand my grief and my struggles (to be fair, this is because they were by this time dealing with plenty of their own), I found support in my friendships. There was a girl named Jewel who lived near my mom and I, just a few trailers over, and we would play this game together: we'd go to Jewel's mom and tell her that my mom needed to borrow a cigarette, and then we'd go to my mom and tell her Jewel's mom needed to borrow a cigarette. This way we had two cigarettes between us, and we'd hop on our bikes and ride over to the bank across the street, which always seemed to be closed. We'd ride into the drive-through lane closest to the building and sit there and smoke together. When one cigarette each wasn't enough anymore, sometimes we'd hit the neighbors up too.

By the time I was in my teen years, I like to think that I was a bit more well-adjusted - well, as adjusted as a kid who had been through what I had been through could be. My mom had already almost died, had lost most of the fingers on her left hand, had had bedrest because of a skin-eating infection that left a gaping wound in her body that my grandmother had to pack with gauze. The stepfather who had nearly killed her was gone to prison, and we lived with my grandmother. But my mother was in no position to be a mother, and as the years wore on, her health remained terribly fragile. Eventually, her health (and the litany of endless medications, tests, and surgeries) all took a toll on her psychological strength. My grandmother was overburdened with five grandchildren and a suddenly disabled daughter to take care of - she was irritable and she felt very strict to me. I was there with her, and she saw me fed, clothed, and cared for - I had toys and things - but I never felt welcome or wanted.

I was fifteen when my mother attempted suicide in front of me, pouring a bottle of pills into her mouth, drinking water from the kitchen faucet to wash them down. She bit me when I crammed my hand into her mouth to dig them back out, and we fought until we hit the floor. I don't know what the pills were, but they were fast. She lost consciousness. I called 911. She was taken out in an ambulance to have her stomach pumped, and I was on my own for the weekend - the only "adult" available to look after me was my 18 year old boyfriend, who stayed with me.

I sought solace in him, and in my friendships. In my closeness with my cousin, in the collection of people I built around myself - kids who "got" me, because they were in many ways as broken as I was. I sought support, and in the girl who had been molested, the girl who had been beaten, the boy who had been violated, I found understanding. I found myself, and through that companionship, I found a sense of safety I hadn't known it was possible to find. I found the truest sense of the word "family."

So, to my friends, my family, my loved ones, my readers ... to everyone behind the scenes, holding my hand and patting my shoulder, talking me through crisis after crisis ... those who encourage me to take terrifying steps into the unknown even now, for the sake of a tomorrow I'm still hoping to make it to ...

Thank you for your support. With all of my love, and from the deepest, darkest, most inaccessible reaches of my shriveled, damaged little heart ... thank you. (Even and especially you, Dana. Because this time, you count.)