By Brandi Kennedy - May 08, 2017
It's been a while since I posted a man crush, and the last time I posted one, it was for a fictional character - a Scottish whirlwind of a man who can handle anything, who can fix any problem if given the time, who can carry the weight of entire groups of people on his shoulders without collapsing.

He's my more rugged, more old-school, just a little more Viking version of a Disney prince, and he's utterly perfect from the muscles to the kilt, from the Scottish brogue to the endless and unfaltering dedication to those he loves.

He's Jamie Fraser, and in case you missed it in the first paragraph, he is unfortunately not real.

Then I met Raine. 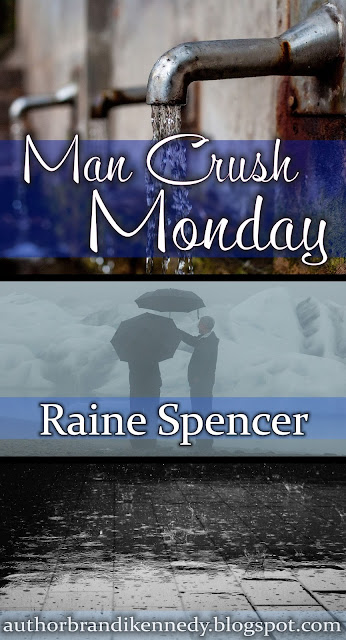 R.C. Spencer is a Canadian blogger I met through one of the networking groups I'm a member of on Facebook, and the first line I ever read from him changed my life. The first post I read from him was his recounting of an appointment that changed his life - the appointment where he was informed that his cancer prognosis was terminal, that there was nothing left to do but buy time.

I sobbed reading his words. The whole post - and indeed, his whole blog - is written in a first-person-fiction style, with each post a sort of story from his life, the retelling of a moment, a snapshot in time transformed into words so heartbreakingly beautiful that I haven't once read his blog without crying. They're regular moments - time with his children, time with his family. Moments of reflection.

Raine is a single dad, a divorced father of six, actively co-parenting with his ex-wife while fighting every day for another tomorrow - and this, in the midst of my own circumstances, is what breaks my heart into the tiniest most immeasurably small little pieces. I have been an abandoned daughter. I am raising abandoned daughters. And this man loves his children, wants to be with them, to guide them, to teach them. He wants to befriend his sons and make crass jokes with them; he wants to teach his daughters how they should be dated and intimidate their boyfriends into good behavior. Six children, four boys, two girls. And this father who loves them and wants them ... he will be taken from them, and it shatters me. Life is so unfair.

But he's beautiful, and so his perspective cannot help but be beautiful as well.

"At that moment, my questions are answered, the who’s, the what’s, the how’s… the answer is each other. My children, without me, will guide each other. They will be alright. Inside each of them exists the best of both their mother and I. We raised them right. And while there is never enough time on this physical earth to be with those you love, your goal and the only thing that will ever truly matter is love. Love will guide them. I will love them from wherever I am. They will love each other on earth. They will be alright." -- R.C. Spencer

His blog is rich with feeling, each post infused with the unique perspective of a man facing the inevitable. And in some respects, he's just the same as anyone else, just a man, just a father. He has work, he has a new wife, he has a car that needs a tuneup now and again. He has passions and hobbies, just like anyone else.

But the perspective - that's unique to him and people like him, those with a countdown attached to their hearts, those who've been forced to sit through that appointment and hear those words.

"In the blink of an eye, time suddenly became finite; a precious resource in perilous danger of running out." -- R. C. Spencer


It's hard won though, perspective. It comes to us only through experience and willingness to accept life's lessons, strength to endure them and grow through them ... and the courage to not only face the challenge head-on, but to share it so openly with others.

We've become friends in recent weeks - months? - and he's a balm to a sore heart. Despite everything, he's open and kind. He's a fabulous listener and a strong conversationalist. We chat daily now, about the minutiae of living, about our histories, about our futures.

I tell him I hate his cancer, that I wish I could cure him, that my heart breaks for the loss of him and for the way it will touch those who love him. He offers to step back - in his way trying to protect me from pain. I tell him, as gently as I can, to stuff it.

"There are no goodbyes. I know this now. I feel it. There is time left. Whether that time is short or long, it doesn’t matter. What matters now is the moments left to fill that time with." -- R.C. Spencer

They say people come into our lives for a reason - some as blessings, and some as lessons. But Raine? Raine is both.

Go check him out, read his incredibly poignant and beautiful writing, gain some perspective. And let him make you a better person - like he's making me.