Works For Me Wednesday: Taking It Personal - On Purpose

By Brandi Kennedy - May 17, 2017
I'm a people pleaser - I always have been. I grew up feeling rejected or discarded often, and as a result, I suppose I internalized the idea that if you're always working, always striving, always willing to go the extra mile ... then someone will keep you.

This has backfired in the worst ways over the years, adding further damage to the broken little girl still hiding in the back corner of my mind.
Strangely, this has buried me in a cycle of relentless feeling - sometimes too much, other times too little, and all too often about the wrong people.

I'm "too sensitive." I "take things too seriously." And I always, always "take it personal." It's my fatal flaw; it always has been. 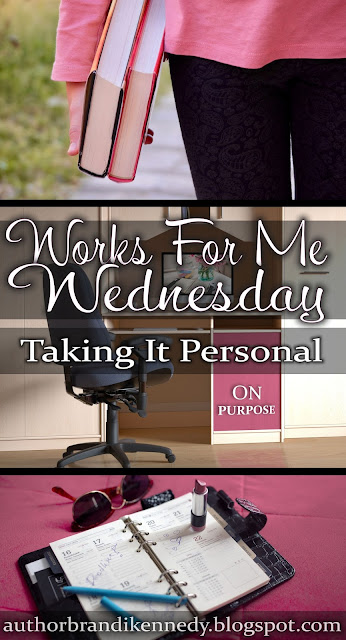 Many years ago, I had the opportunity to truly fall in love with someone who was my best friend. He never left me feeling anything less than heard, and validated, and valuable. We would exchange literally hundreds of texts every day, and we talked about everything from dietary habits to working out to movies, music, sex, and even prayer. That relationship was the most intimate relationship of my entire life, and it taught me the difference between the sort of treatment I had thought was normal ... and the kind I wanted. It ended, as so many do, but it ended on good terms, and he and I still check in on each other now and then; he will always hold a significant place in my heart, because after I had learned so much of what I didn't want, he taught me so much of what I did want.

Still, it took time to adjust, time I spent settling for treatment I knew I didn't want, knew wasn't what I needed, and knew wasn't going to ever change or improve. Not only in a romantic sense, but in my friendships, in my familial relationships. With my colleagues in the writing world.

So when did it all start turning around? Well, that was the moment when I had someone tell me a year or two ago to "Q-TIP." Quit Taking It Personal.

This was said to me when I leaned on someone I expected to understand. I talked about my mother, about some of the issues she and I have in our relationship. I talked about being hurt, feeling used ... other things. And I was told to "Q-TIP." Quit Taking It Personal.

I know it was said with the best of intentions, because the person who said it has never been anything other than perfectly sweet to me, willing to nurture and coach and guide, openly offering friendship. But ... Q-TIP? Quit Taking It Personal?

I guess you could say I took that advice personal too, just like I also take it personal when my children are disrespectful, when I'm hit with passive aggressive behaviors from others, when I'm feeling rejected or mistreated in relationships.

Even with that said, it's still more complicated than that though - isn't it always? The truth is, taking it personal is kind of a strange mix of happenings for me - because as "sensitive" as I am, I tend to be pretty understanding too, and even I can admit that other people's behavior isn't always "personal."

But sometimes it's none of those now-and-then excusable things, and when bad behavior from other people becomes a regular occurrence despite efforts to communicate the issue, it's not just because they're having a bad day. It's because ... well. It's because it's personal.

And I might be wrong here but ... well, when behavior like that is consistently aimed in my direction ... to me, that's very, very personal.

And realizing that? Accepting it?
It's changing my life.


I began to learn the difference, truly,
between the nice person I want to be,
and the weak woman I am
sometimes mistaken for.

Where it gets really life-changing though, is that instead of quitting taking it personal, I quit trying not to. I started to look, in the long term, at how I was treated by the people around me, what it said about how they saw me - and what it says about my own ability to set and defend boundaries even in the face of opposition.

I started to look at why I allowed myself to be treated in ways that made me feel horrible, why I had opened the door of my life to people who would choose to attack my character as a person simply because I dare to crave appreciation and positive feedback from those around me.

In making a point to "take it personal," I started learning to stand up for myself more strongly. I started telling off people who mistreated me, and cutting off people who were chronically toxic. I stopped opening doors to people who didn't want the very best for me, and one by one, I opened windows in the bottom of my life, allowing poisonous people to simply fall away - which began in turn to open doors that allowed new people to come in. People who do want the best for me.

I stopped just letting people in. I stopped trusting as easily. I started believing what I saw rather than what I heard.

This, in its most basic and simple form, is how I stepped out of being a victim of circumstance,and started becoming a survivor with a war strategy.

And now? Well, there's no stopping it now. The boundaries are set, the borders are drawn. I am a warrior, and I am moving up. Because it's personal.

Blog Posts Works For Me Wednesday