By Brandi Kennedy - June 10, 2017
Recently, Josephine has been reading through the first several books in the Left Behind Kids series - I haven't read the kids series, but I've read the adult ones and I actually attribute much of my Christian testimony to my experiences during the time I was reading those books. But we're a Christian family in general, so between that and our reading material, deep theological discussions are not uncommon for us.

A couple of days ago, we spent the evening in an energetic debate about our theories on the Christian Rapture, the Tribulation period, and other such topics - somehow this led to us talking about whether or not we truly believed in things like spirits and ghosts and demons. 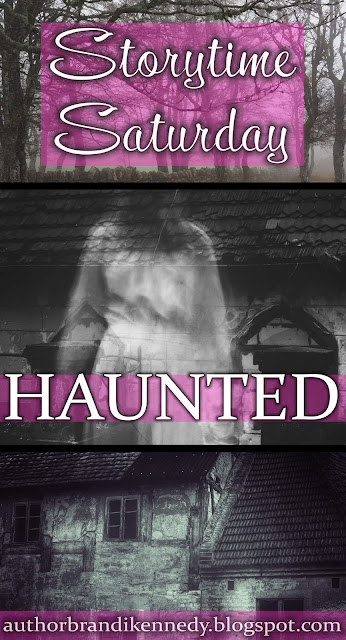 A few years ago, we lived in a haunted apartment. It was me, Jo, and her dad; he tended to work second-shift, late-night jobs, and so I was often alone in the evenings after I had gotten Joey to bed. Frequently, once the daily homemaker chores had been completed, I would settle in on the couch with a book or something on TV, and I would wait up to greet my guy when he got home from work.

About three or four nights a week, once Josephine had fallen asleep (this I know because at that time I would often check on her throughout the evening), I would hear very slight footsteps pacing the hallway behind me. Softly, like that of an older child who has learned to walk quietly but not quite silently. The footsteps would come to just the edge of the hallway and stop, as if in wait - there would be silence for the space of a moment, and then the steps would turn and go back down the hall, fading into nothingness around halfway. The same silence, and the steps would approach me again.

I don't know if it was because I had a little girl, but I always felt that the presence was a little girl - perhaps a girl in need of security or protection, or maybe only reassurance. I felt the same as I would have had it been my daughter coming up the hallway - except that it wasn't my daughter. Still, after a while of this, I would often get a bit spooked, and then turn somewhat irritated. And I would say to her, "Won't you just go to bed? Everything is fine out here."

To which there would be silence. Utter silence. She didn't walk away, she didn't throw any plates. She would just go silent for the night, to return again later.

Other things happened in that apartment too - things which are simultaneously easy-and-not-easy to explain.

Joey's dad and I had taken the middle-sized room in our three-bedroom apartment, giving the master bedroom to Josephine, who had more toys and more space requirements in order for her messiness to not bleed into the rest of the apartment. As such, our bedroom was neat but somewhat crowded, filled with a queen-sized bed, a pair of nightstands on either side, and an armoire opposite the bed. On my side of the bed, there was a small walkway, slightly interrupted by my great-grandmother's bookshelf, which I had filled to the brim with books of all kinds. On his side was the entry to our small closet.

One night he sat straight up in bed from a dead sleep, and said, "Did you see that rat?"

Well of course I hadn't, because I'd been just on the verge of sleep myself. But I leaned over his lap, to look obligingly over the edge of the bed - and I saw a small dark shadow dart from just beneath the bed. It moved quickly across the small (maybe 18-inch) aisle of walkway on his side of the bed and vanished under the closet door.

So naturally, I insisted that we close the bedroom door, thus trapping whatever was IN THERE in there with us - and then that we rearrange and lift all furniture and belongings, searching for the rat, which was not to be found in the closet. (To be perfectly clear here, by "we" I fully and totally meant "him," the man in charge of keeping the delicate status of my safety protected. Of course.)

Needless to say, there was no rat - only that one dark shadow. That little nagging bit of ... somethingness that still freaks me out to this day. A blob of blackness, a feeling of ... malice? Whatever it was, I have always believed that it lingered in that room. I began to have dreams almost nightly, and slowly became just a little afraid of going down the hall alone at night when it was dark. I could feel ... something there.

Later, when I got pregnant with Eden, we switched rooms with Joey and took the larger bedroom, lest we have any unnecessary sibling issues over things like, "Haha, I got the BIG room." This way, he and I had the master bedroom, Jo had the middle-size room, and Eden would take the smallest room - fair enough, right? And makes perfect sense.

But when we moved Joey into that room ... that was when her nightmares began. It was when she was diagnosed with Oppositional Defiant Disorder. Almost overnight (even though it was so early in my pregnancy that she didn't even know a baby was coming yet), it was when my sweet and easy-going daughter turned into a master of provocation, a competitive and manipulative little person.

She had horrible dreams about floods and burglars and monsters, about rodents and a scary boy names Mike. She had terrible, constantly plaguing anxiety, to the point where we got her an emotional support animal in an effort to hold off putting her on anxiety meds (she was already on meds for ADHD and ODD).

She has told me that believes she was possessed at that time, and describes a feeling of malicious and fear-filled ... fullness ... that would come over her in waves. Waves that also began to wash over me at certain times, when I stood in certain places in the apartment. Waves that stopped when we ended up switching apartments only a year or two later.

We believe the Bible warns us against speaking and communicating with spirits because they are real. Because we have felt their presences, both malicious and otherwise.

What do you believe?

Something new I've been thinking of adding to the blog for a while is a "Featured Favorite Product." I think this would be a great way to share the markets, brands and products that I love best in a way that's unintrusive and fun - because while I love the idea that sponsorships and affiliate sales could someday help pay for some of the upkeep on my brand, the truth is, I'm not a salesperson and I don't want to be. But sharing my favorites here in a quick mention that shows what's working for my family? That, I can do. Bear in mind, I am using affiliate links - this means that if you choose to click one of my links and purchase through them, I'll receive a (very) small commission at no extra cost to you.

And now, with that disclaimer out of the way, here's my #1 most favorite product to use lately:

You guys already know I have issues getting enough protein to keep myself feeling functional, so I'm always glad to try a new supplement that gives me something other than the constant influx of meat, eggs, and cheese. I can't have a lot of milk because I have a very mild lactose intolerance; therefore, instant (powdered) protein shakes tend to taste gross because I mix them with water AND still upset my stomach because they're often made with milk (whey) proteins.

are premixed, made of actual milk, and DON'T upset my stomach because they have lactase enzymes already in them. They're quick and simple when I don't have time to eat, when I don't feel like eating, or when I want something sweet that doesn't make me feel guilty for treating myself. I definitely recommend them - they're delicious, and they're great for a quick energy boost that feeds your body without an overdose of calories. Actually, I'm seriously drinking one right now; I left it in the freezer a little too long and it's full of chocolatey little ice crystals. Yum.

Plus, the strength boost might come in handy if I ever end up living anywhere else haunted, especially if I get the kind of ghost that likes pushing furniture over or throwing dishes. I'll need all the strength I can get to not haul my ass out of there and never come back.

If you liked this post or you think you know someone who will, I encourage you to share it. Invite others to come here and interact in the comments. If you find yourself impacted in any way by my content, or if you've ever been haunted before ...definitely feel free to leave a comment and tell me about it below. And remember, you can (as always) access more exclusive content (or just show some love) by signing up to support me on Patreon. Your support won't feel like a lot to you, but it would mean the world to me, and your encouragement would change life for me and my daughters in ways I don't even know how to truly express.

If you'd like to be sure you never miss a post here, make sure you subscribe to this blog (you can find the subscription form in the right sidebar). Either way - whether you're a first time reader or a loyal follower of this site ... thank you for reading.