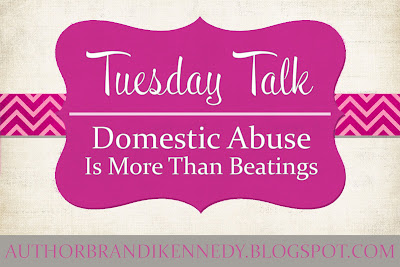 I haven't talked about this much here - not in the way I'm about to and not nearly as much as I might have wanted to, out of a desire to protect myself and my children from the repercussions of words spoken without a great deal of thought. I've talked about the abuse I witnessed and endured as a child - but with limitations:
But even with those limitations, I have suffered consequences of my openness. I've lost relationships with family members. I've lost friends who couldn't handle knowing what I'd been through - friends who, after knowing what I've seen, could no longer see me in the same way. And there are other aspects of all of it that I have never - and will never - speak of again outside of therapy, not after being accused of "making it up" by someone too busy protecting themselves to protect me.

BUT DOMESTIC ABUSE IS MORE THAN BEATINGS
IT'S CONSTANT CRISIS & REPEATED THREATS & APOLOGIES THAT AREN'T MEANT
I don't talk much about another relationship I was in, where I found myself attached to a drug addict who lied to me constantly about his addictions - about how serious they were, about how much they changed who he was, about his intention to get them under control. He would "go" to Narcotics Anonymous meetings; he would kiss me goodbye when I dropped him off (we had one car), walk in the front door alone, and walk directly out the back door with the drug-addicted woman he was having an affair with. I suppose they had more common ground, and now, these many years later, I don't resent him finding someone he thought might be a better match for him - by that time, we both knew we weren't meant to be. But I was lucky I left him when I did - he ended up catching an STD not long after we separated, and the knowledge of what he was doing was part of what gave me strength not to take him back, especially in the moments when I was lonely and afraid of life as a single mom. I don't talk a lot about when the rage kicked in and he started threatening to kill me. I don't talk a lot about what it felt like to file for a restraining order and have it denied because "he hasn't tried anything yet." I don't talk about the nightmares and panic and what it's like to constantly be looking over your shoulder, scanning streets and stores and driveways and parking lots and even my own front yard. I don't tell a lot of people that the shower scene in Fighting For Freedom - the one where Christine was too afraid to get out of the shower - was drawn directly from that time in my life, when I had to pep talk myself into every shower, and then once I was in, pep talk myself back out. I don't talk about how that still happens sometimes.

But perhaps most importantly, I haven't talked in obvious ways about yet another relationship - the one that taught me just how dangerous charm can be, the one that opened me up to someone I will always believe was narcissistic abuser. An abuser who quietly slipped into my life and took it over so smoothly that I hardly even noticed. I haven't talked about how, before him, even I still believed that "domestic abuse" wasn't real unless your mother got hit by a truck and your brother got shot in the eye and you got stripped naked to have your bruises photographed in the guidance counselor's office at school. I didn't believe it was abuse unless it was violent - until HIM, until I had endured so many years of covert psychological abuse that it triggered my PTSD and left me with an imploded life full of broken bits I still haven't been able to sort out yet.

DOMESTIC ABUSE IS MUCH MORE THAN BEATINGS
IT'S GASLIGHTING & MANIPULATING ISOLATION. IT'S REPEATED CYCLES OF LOVE-BOMBING & GHOSTING. IT'S USING CHILDREN AS TOOLS. IT'S ECONOMIC ABUSE AND CONTROL FOR POWER. IT'S PSYCHOLOGICAL TORTURE FOR FUN.
Domestic abuse isn't always brutal beatings and black eyes. It isn't always bruises covered in makeup and children with mysterious injuries. It isn't always obvious violence - or the obvious fear of it. Sometimes it's the false promise of a future that doesn't exist. It's a painted dream, an illusion, a fantasy.

I can't tell you how many times I've heard people give me softly spoken and slightly condescending variations of, "Well, at least he doesn't hit you." With several of my relationships, that was the excuse that kept me coming back for more. In abuse situations, "at least he doesn't hit you" often works to negate the total erasure of personal boundaries, as well as the various covert punishments victims of abuse tend to encounter when stepping out of line - many of which are not violent but are still equally damaging.


It's the relentless and nearly impossible burden of recovery.

It's a book called Fighting For Freedom, a collection of memories mixed into fiction by a woman writing every word as a prayer for a freedom she can barely even imagine achieving. Yes, in it's clearest forms, it's violence and bruises and broken bones and blood. But sometimes it's quiet - sometimes it's so subtle even the victims can't see it until it's too late, so sneaky even the people who witness it can deny it's happening. Sometimes it's this:

But here's the thing - that video gives hope and hints at possibility. For some. You see, in order for the woman in the video to have filled all those tampons with cash, she would have had to have access to cash. Maybe she was allowed to have a job - or if not, maybe she was allowed an allowance.

It's forgotten independence and learned helplessness - it's a loss of self, mourned by the victim and celebrated by the abuser. It's a breaking of the sense of autonomy that makes us feel like humans - it's a recognition, a becoming, a reverting back to the animal that lies within. It's Pavlovian training. It's Stockholm Syndrome. It's forced and/or learned co-dependence.

It's punishment, however subtle that punishment may be, for the existence of self and the establishing of boundaries. It's neglect and starvation and homelessness - or the constant threat of it. It's the idea of violence, if not the act of it - hidden in the way an abuser stands over a victim or blocks doorways on purpose or exerts physical strength and personal dominance just to show that they can.

And while the video I shared above is wildly powerful - there are victims out there for whom even that much hope seems impossible, for whom recovery looks unachievable, for whom the hits just keep on coming.

There's no featured favorite product today - just a reminder to look upon others with kindness, without judgement, without preconceived imaginings of who they are and how they got that way. We don't always know other peoples' stories. We don't see what goes on in the recesses of their lives, in the quiet behind the closed doors - and even when they choose to open those doors, we still don't see everything.


Fortunately for the girls and I, I have help - I have people who step in every day and encourage me to keep going and to keep growing, who hear me out when I need to talk or sit with me in the silence when I need to NOT talk. I have my therapist and my friends, I have this platform and the emotional freedom it gives me, and I have the complicated blessing of my friendship with my daughters' grandmother - who has gone out of her way to make space for the girls and I to rebuild, despite many reasons she might have chosen otherwise.

Many do not have even these things - and while I sometimes find myself suffering, I am grateful too, for those who stand beside me in my darkness, for those who reach out in that darkness to guide or walk beside me, those who call my name from their place in the light, reminding me that my darkness is not infinite.


NOTE: This is usually where I have my affiliate disclaimer, since I'm usually using affiliate links through which I receive a (very) small commission. Today I'm not using them because I feel that it would cheapen the depth and personal importance of this post - but if you'd like to see a list of companies I'm currently working with, you'll find them here.

Writing something as honest as this post is exhausting. It took five hours to write - with much of that time spent carefully poring over every word, desperately trying to straddle the line between my desire to be honest and open, and my desire to protect people who are not at fault and shouldn't be made to feel as if they are. I stopped to cry more often than I would have liked. I drank wine during the day. And I prayed this post would be seen by people who need it. If this post touches you in any way, please feel free to tell me in the comments - or if you need someone to talk to privately who can understand and commiserate, send me a message at authorbrandikennedy@gmail.com, or hit me up on any of my social media pages. If you know someone who would benefit or learn from what I've said here, I invite you to share it with them.


As always, my brand is built on the concept of what I write and who I'm writing it for. "Love Stories and Lifestyle for the Undaunted Woman." But what's an undaunted woman? Click here to find out more about what it means to be undaunted and how you can nominate your favorite undaunted woman to be interviewed - right here on the blog! The first interview is coming up at the end of this month, and I can't wait to introduce you to August 2017's Undaunted Woman!

In the meantime, if you'd like to follow my journey as a writer, a mom, and an abuse survivor with PTSD, subscribe to this blog by filling out the "subscribe by email" form in the sidebar. I'll share my pain with you, yes - and it won't always be easy to read. But I'll share my growth with you as well, and hopefully we'll inspire each other along the way. To get even more personal, come over to Patreon, where you can sign up to sponsor and support my writing. You can subscribe for as little as $1 a month, and that dollar gets you access to all sorts of content - including photos and mini-blogs from my personal life AND advance access to my fiction writings! For a little more, you'll get to read my poetry, listen to podcasts, and even get your name on my personal mailing lists.

For those who want the inspirational parts of my content without as much of the personal aspects, connect with me on social media, where I like to share all sorts of things - from self-care tips to mental health quotes to song lyrics and more.

But however you decide to keep in touch, whether you're a first time reader or a long-time loyal follower ... from the bottom of my heart, I truly thank you for being here.