By Brandi Kennedy - January 11, 2018
Remember that show, "Kids Say The Darndest Things?" I used to love that show when I was younger, and I would watch it whenever it came on because I loved how totally innocent the kids always were and how accidentally hilarious they always turned out to be. It always made me laugh because it seemed like every kid on that show had some uncanny knack for finding exactly what their mother wouldn't want them to say - and then saying it. It aired back in the era of more simple, less guilty amusement - back when a joke was just a joke and everyone was free to laugh at it.

Watching that show, I fell in love with the irreverent sort of humor children don't even realize they have, and so it made absolutely perfect sense when, later in my life, I encountered someone who tended to describe young children as "miniature drunks - because they can never walk straight and they're always honest."

Now, it makes equally perfect sense for me to be raising two kids with their own totally irreverent senses of humor. 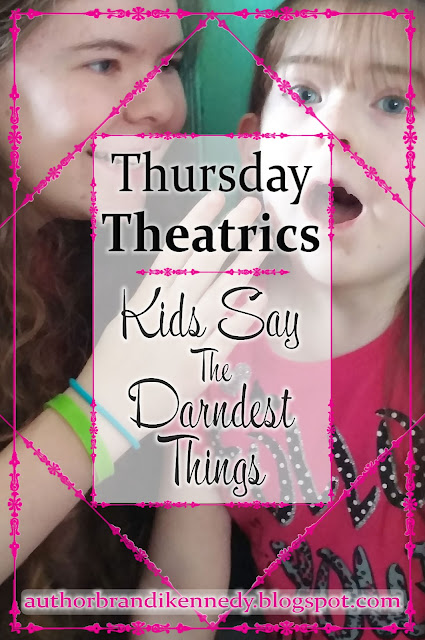 My kids are always saying silly things when I least expect it - and their ever-adjusting, slowly-maturing view of the world is something I rarely ever tire of witnessing. Children start out so blank, don't they? I mean sure, they have their own little starter personalities as babies - some cry more, some eat more, some laugh or crawl or talk sooner - but it's only as they grow older and start to develop based on their own unique experiences that they begin to solidify as humans in their own right. It's such a process though, and it's amazing to see things from their perspective:


01. I HAVE A HABIT OF saying things like "it is what it is" pretty often - it's my way of reminding the kids that while we aren't always totally thrilled with whatever situation we're currently in, we don't have to just settle for being miserable about it the whole time. I'm not always the best at putting this idea into practice, but I tell my kids all the time that when we feel like we can't control or escape something, we do still have the choice to accept what it is and allow ourselves to learn from it. Reminding them so often has the duplicate benefit of reminding their mother - "It is what it is."

I literally say this at least once every couple of days though, so imagine my surprise when Eden responded really irritably a few weeks ago. She had been sad about things going on with her dad, and I sighed and said, "Well, babe ... it is what it is." And she glared at me, pouted mightily, and responded with, "I hate when you say that to me!"

I was, of course, totally surprised by this reaction, and I said, "What? Why?" To which she answered, "Because I never know what IT is!" I nearly died laughing.


02. DANA AND I ARE FIVE months apart in age - with me being the older. And fourteen years ago today, we were pregnant together - with me being ready to burst and Dana being close but not quite there yet. We had our children three months apart, with Josephine being the older. The kids spent the first several years of their lives pretty much always together; they ate together, crammed birthday cake down their diapers together ... the only thing they didn't seem to do together was cry, and that was just because they tended to do that in turns. But they were both blessed with beautiful, well-planned, hard-to-say-if-you're-a-toddler kinds of names.

So you know how, when you're trying to get your kid to stop doing something, you kindof shout at them with both their first and middle names? Well, for a kid who doesn't like babies, Joey was always a little mama, which was hilarious because she couldn't properly pronounce her cousin's name. So you can probably imagine how hilarious it was to watch her chasing after him - shouting, "No! Dedekial Ding!"


03. BOTH OF MY KIDS HAD minor speech issues when they were little. One barely spoke at all for years - so long, in fact, that we wondered if she even could. Turned out she spoke just fine once she decided she had something to say, and she's been speaking her mind pretty much ever since. The other one spoke freely from a very young age, but always with just a little bit of a slur. She had a hard time with the correct pronunciation of several letters, but the most pronounced issue was with the letter L. Any word beginning with the letter L would almost always have its L replaced with a slightly-drunken letter W. Which was especially cute when she would recite her dinnertime prayers, always beginning with, "Dear Ward ..."


04. "THAT'S A ROOTY ROOT BEER ..." I don't usually let my kids have a lot of junk food or soda. In fact, it's not uncommon at all for us to throw away remnants of our Halloween candy in preparation for Easter, and then throw away the leftover Easter candy to get ready for Halloween. But despite my efforts to steer my kids clear of most things sugar, they have both fallen deeply in love with Root Beer. So about a week or two ago, one of the girls took the rest of her root beer with her to school because she hadn't finished it the night before; she came home from school that night and I asked her if she had finished her drink. Her response was a completely serious (complete with facial expressions and hand motions), "Yeah, but you know what? I could really taste the root in that one. It was just ... really rooty, you know?"

Don't forget, this month I've got a BLOGuary partner - David Elliott, from The Single Dad's Guide To Life has agreed to partner up with me this BLOGuary to offer the dad's perspective on all things lifestyle - from food to poetry to quotes to ... well, who knows what all we'll cover as the month goes on. David always has an interesting mix of silly and serious in his blog posts, so head on over and check out his blog - you'll definitely be in for a treat because he's countering my "Kids Say The Darndest Things" with a "Parents Say The Darndest Things," and his post is hilarious. Except for the spider story, which was utterly horrifying. But first ...

If you liked this post, share the link with your friends - it really helps me get the word out about my blog and it brings new readers into our community! I'd love to interact in the comments too, so if you leave a comment with your thoughts on this post, be sure to click "notify me" in the comment box so you'll know when I've answered you back!

While you're here, subscribe to this blog by filling out the "subscribe by email" form in the sidebar -it's the best way to never miss a post! And if you like this blog and want to take an active role in keeping it all running, here are two ways you can get involved:
Patreon is a great way to help manage the costs of running this blog, and it's also where my readers get to read my novels while I write them! My patrons directly sponsor my various writing endeavors, and sponsorship gives Patrons access to all sorts of content depending on their budget and desire for involvement: the $1 tier gets access to one new romance chapter a month, two brand new poems from my upcoming poetry collection, the weekly L.A.F.F.S., and occasional content polls!

There are several other reward tiers to choose from too - and the best part is that as my patronage grows, so do the benefits for every patron! Our goal right now is 50 patrons - when we get to 50 patrons I plan to double my monthly fiction chapters, which means twice the writing from me in exchange for the same monthly contribution from you.


But however we stay connected, whether it's through my books, this blog, social media, or even Patreon, you can always rest assured that my brand is built on what I write and who I'm writing it for. "Love Stories and Lifestyle for the Undaunted Woman" isn't just a slogan or a tagline - it's a purpose and a goal. Click here to find out more about what it means to be an undaunted woman - maybe you'll find that you already know the perfect nominee for our next Undaunted Interview!