Book Characters: "Most Likely To ..."

By Brandi Kennedy - May 17, 2018
The end of another school year is upon us, and this morning I sat in at Eden's school for the third grade awards ceremony - where she was given award for various subjects and honors, because school is the one place in her life that isn't a challenge for her. While she's hyper, impulsive, and totally quirky, she's also wildly smart, a devourer of books, and a kid with an enormous loving heart.

As this goes on, Josephine is rounding out her final year of middle school with a planner's eye to the future. She's got a solid idea of where she wants her life to go, and she's got a great career plan already in place that make her mother's heart so, so happy. She's chosen a hard career field work-wise, but it's lucrative and secure, and I think that's all any mother really wants for their child - to know that they'll be self-sufficient and able to succeed in the goals. She and I have our issues too, but this kid is rock solid with a steady head and the kind of solemn, serious outlook that gives me great faith in her future success. In the meantime, we're looking toward high school with excited anticipation. 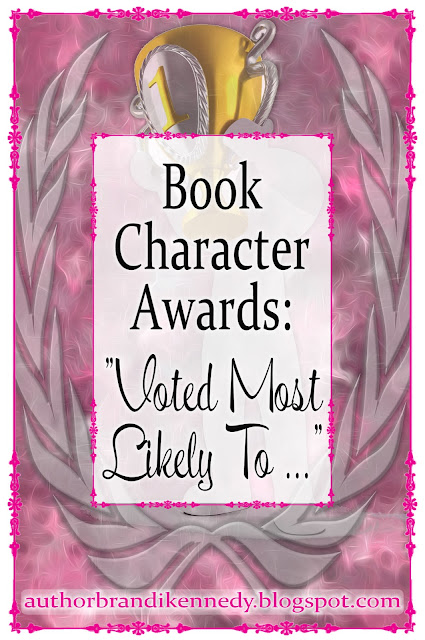 In light of the closing school year and the general feel of local graduation ceremonies and sentiments, I found this blog post while I was making my way around the internet, and thought creating my own adaptation of it (in regard to the characters in my novels) would be super fun! The post linked here is a tag-styled post, with various things a book character might be voted "most likely to" do or be, which got me in mind of yearbooks and the sort of end-of-year sentiments the kids are all sending each other into summer with.

I thought this would be a great way to focus on something a little more lighthearted, as I've had a super busy week (complete with a panic-attack-induced emergency-room trip) and desperately need something light to have a little fun with - plus, it's a great way to bring my books and their amazing stories back to the forefront of the blog for a change. So without further ado, here are my book characters most likely to ...

Be Overprotective:
This would be Will, for sure. He's the son of one of my favorite characters from Fighting For Freedom, and he's the best, most protective big brother a little girl could wish for. Will is still pretty young, but he's the man of his family now, and he takes that responsibility seriously, especially when it comes to the safety and welfare of his mom and little sister. I imagine a grown up Will to be quite protective - the sort of boy who distrusts all of his mom's future potential boyfriends, and has no qualms about threatening everyone who dates his sister.

Be Good With Kids:
Cameron Kingsley is the oldest sister in the Kingsley family, and her story is told in Prescription For Love, the second book in the Kingsley Series. She's a trauma survivor ten years out from the event that changed her life - but while she's managed to build a lucrative career and a fairly robust personal life, she still has a long way to go in her journey to reclaiming her sense of self. Fortunately, she meets just the right guy ... and his dad's pretty great too.

Pick Flowers For You:
Brenna O'Connor is a sweetheart through and through - fiercely loyal, undeniably strong, and completely open-hearted. She's a warrior woman who has survived more than her share of loss and sadness, and as such, she's the perfect new friend for Annie Jacobs in the Selkie Trilogy. Even if she is harboring certain secrets ...

Lend You Their Clothes:
The character from my books most fitting for this category is Michael Kingsley, hands-down. In More Than Friends, (fourth book in the Kingsley Series) he's been through a lot and he's just learning to deal with his insecurities; he doesn't always choose the best methods, but he's doing the best he can to be a good son, a good brother, a good friend. And in the midst of all that, he's still just a guy with a heart of gold - one who would literally give the shirt off his back.

Talk With You For Hours:
You first fall in love with Mackenzie Caswell in Fat Chance, the first book in the Kingsley Series; he's a therapist with a dry sense of humor who likes to use unconventional methods to spur progress in his clients. But in Prescription For Love (the second book), it's someone else using unexpected methods to inspire progress in his life ... and this means great things not only for Mac, but for the person he loves most in the world.

Take Time Looking At Your Eyes:
Drew Kingsley is an incredible sweetheart. His work as a police officer is stressful, and a crisis situation at work has him finding romance in the most unexpected of places. In Fat Chance, the first book in the Kingsley Series, Drew has a chance to look beyond the conventional outside to see the beauty within a troubled young woman - and the beauty of Drew is that he loved every second of it.

Say You're Beautiful:
This is the first and only somewhat unpublished character I'm sharing on this list. I say somewhat unpublished because you can actually read what's been written so far in Colin's story, which is tentatively titled "Tested" at this time - and Colin is one of my all-time most favorites of my characters. Not only is he smart and funny and easy-going, but he knows exactly what he wants and isn't too scared or too proud to go for it, even if that means thinking way outside the proverbial box. I've only written about 20k words in his story ... and yet I'm wildly in love with him already, particularly because he's honest and he says what he's thinking, but also because he's quite the impressive flirt, and what woman doesn't love that?

Go To War To Save You:
There were multiple perfect choices for this one, but Aiden Williams (Fighting For Freedom) is too obvious a choice to be ignored. He's a veteran, so he's literally been to war ... but he also knows when to step back and empower others to fight their own battles, too.

Travel The World:
An easy choice - this is Malik Anderson without a doubt. Malik is an amazing guy with a heart of gold, an adventurous spirit, and more than the usual amount of time on his hands. Protecting his secret means nothing to him in the face of protecting the one he loves though, and he's willing to give up his entire way of life if that's what it takes to commit to Annie Jacobs in the Selkie Trilogy. Which is handy, because once his enemies start hunting Annie ... well, let's just say Malik's got more than just a little light travel in his future.

Get Arrested:
This one is definitely Malachi Matthews, who actually did end up arrested in Fighting For Freedom. He had been beating his wife for years, but thankfully, watching her dying of a punctured lung scared him into calling the police - on himself. From there, the story is focused on Christine and her recovery as she rebuilds her life ... which is fitting, because Malachi is a piece of shit excuse for a human.


What other things would you like to see here like this? It was really fun taking this time to look at my characters from this sort of perspective, but since I didn't have enough space or time to talk about all of my much-loved characters (I didn't even get to mention some of my books at all!), I'd love the opportunity to do this kind of post again sometime! Maybe it would be fun to do a summer-themed character tag ... but what prompts should I use? Leave your suggestions in the comments!