In The Moment: Confession Collection #3

I used to always write my blog posts on the day before they were scheduled according to my calendar. I'd have them ready by the night before, neatly finished and tidily scheduled to post early in the morning. I loved the idea that if people subscribed to my blog by email, then I'd be right there in their email box first thing in the morning when they woke up. Readers could hang with me while they sipped their morning coffee.

But this year has been a wild ride already. The first quarter went alright, and I came into the second quarter feeling pretty confident about the progress I've been making toward certain goals.

Since then, things have gotten a little crazy. And since I'm exhausted and overwhelmed by so much lately, I thought tonight would be a great time for opening the door to vulnerability. So I'm gonna share some of my truth with you. 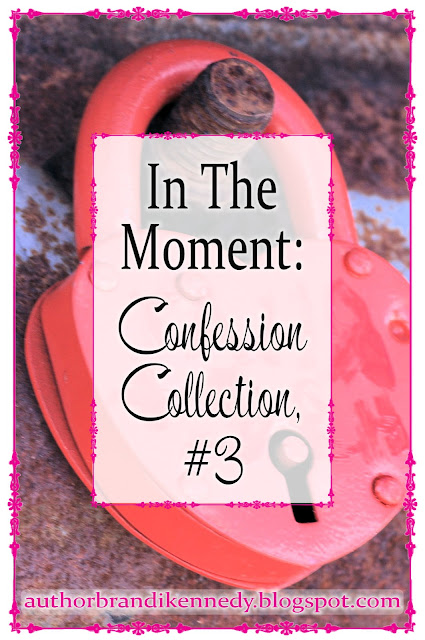 ... I've been totally shocked by certain changes in my personal life, starting with increased pressure in my living situation. I'm feeling the whole range of feelings on this topic alone, from hurt and betrayal to acceptance and understanding. I feel like there's a serious deficiency of compassion and empathy in certain parts of my personal life, and it saddens me. All the same, the changes initiated by this lack are thrilling. I've been thinking a lot about the Bible story of the Israelites leaving the oppression of Egypt, and I'm relating to that story more than every before. My personal life still has a lot of desert in it - but I'm so looking forward to the promised land.

... On top of housing environment stuff, we still have no answers on some strange and somewhat frightening symptoms Josephine is dealing with. The constant worry has taken a toll on my mental well-being as her mother, and I can clearly see the stress impacting her as well. At this point, we're just about ready for any answer, just to have one we can take some action on.

... And to keep things firmly in the realm of health issues, Eden seems to be back to getting ear infections, which could mean bad things for future improvements in her ear health (as well as continued hearing loss). This is a terrible concern to me, and the mom guilt is strong here. She already has so many problems, and nothing has ever been easy for her health-wise. It saddens me to see that she's been through so much already, that she's been such a brave little soldier, and yet the issues seems to be growing in number instead of shrinking.

SIDE NOTE: As negative as these first points have been, they do end on a positive note. While there is truly a lot of turmoil and I'm stressed to the point of breaking (I've even been in the ER with my worst panic attack to date), I'm actually super proud of how tough and determined my kids are. They're handling school stuff, home stuff, health stuff, and so many other private issues, but they're still relatively respectful, they look out for each other, they love their mama, and ... well, they're just amazing. I'm so proud of who they're turning out to be. Even on days like today, when my dear little Eden literally talked for about 8 hours straight. I wish I had her energy.

... I recently started seeing a new urologist, and as part of the initial consult, he sent me for a CT covering my entire urinary tract. On the way to that appointment, I was going over my medical history in my mind in an attempt to make sure I remembered everything relevant that might be asked about - namely, my surgical history. And as I was driving, thinking over everything, I had sort of an "AHA!" moment, where something in my medical history suddenly popped out in my mind, screaming to be attended. It wasn't something I'd spent much thought on before, but from that moment I couldn't let it go, so I made some calls, did a little research, watched some videos, read loads and loads of information. And as I took everything in, I became more and more sure that I've tripped over an answer to a great many of my health concerns ... which is, of course, both a relief and a new source of anxiety.

So I mentioned my concerns to my primary physician, who said she thought it would be good to bring up with the urologist when I went in for my CT results (which were surprisingly healthy, considering). And as recommended, I mentioned my concerns to my urologist the following day at my appointment. I was both horrified and relieved to when he didn't brush off my concerns. Relieved because if I'm right about my health, this opens new doors to treatment for issues I've been living with for a long time, and I'm thankful to finally have a medical team in place that takes the time to hear me out. But horrified too, because if I'm right about my health, this likely means I have a couple of complicated and frightening surgical procedures in my future. I won't know more until I've seen the neurosurgeon I'm being referred to.

... I am thrilled to have started attracting some really cool blogging partnerships, not only because they bring in a little revenue, but because the fact that they exist at all means this site is growing and my content is being seen by people who are impacted by it. I'm so proud of this site and the way it documents so much of my journey - not only as an author, but as a mother and a woman. I love that this has become a platform I'm so proud to stand on, one that I hope will continue to grow into something I can use to help empower others.

... I am SO behind. The plus side of being busier and under more pressure is that I'm flattered by the growth and encouraged to keep trying. But the down side is that I am SO much busier and under SO much more pressure. In some ways, I love it, but with the move coming up, I've been trying really hard to overcome certain financial obstacles while minimizing the impact on my mental health and my family - which has led to the discovery of an entirely new passion. I've been taking on freelance proofreading gigs, which are often slow and tedious, but also kind of fun. I can't do many of them because they're quite time-consuming, squeezed into the middle of my crazy life, but they're good fun all the same. Still, fitting those gigs in between blogging gigs and Patreon stuff and medical stuff and other responsibilities means ... well. It means I'm never bored, that's for sure.

What I am, though, is tired. It's currently 11:59pm, I have to wake up in just a few hours to get the babes ready for school, and then it's another busy day in my life. Which means I should probably wrap this up. Thanks for being here with me tonight.