Moment By Moment: 5 Steps To Coping With Overwhelm

By Brandi Kennedy - May 26, 2018
So far, 2018 has been wild and crazy, but also incredibly exciting. When I made my vision board for this year, I did it with a dreamer's heart, with the hope that this new year would be a great year for building on the momentum last year started. I did it with very little plans made, but with great faith and the solid belief that God wouldn't give me a dream without giving me a way.

In the months since, I've seen people I never would have expected step up and go out of their way for me. I've seen people I thought I would always be able to count on fade into the nothingness of the past. I've been betrayed. I've felt abandoned.

I haven't always succeeded, and as I write this post, I'm so behind on things in my life that there are actually several of this quarter's goals that I haven't even started on.

I'm overwhelmed. I have so much going on in my life that when I attend my weekly therapy sessions ... sometimes I see her shaking her head, and I can't decide whether I'm proud or horrified.

But you guys, I'm tired. I'm struggling to cope with so many things, and I'm behind on everything in my life because so much of it right now is a shit show.

Which actually makes me the perfect person to show YOU how to deal with your own overwhelming circumstances - if the strategies I'm about to share with you work for me, then maybe they'll work for you, too. 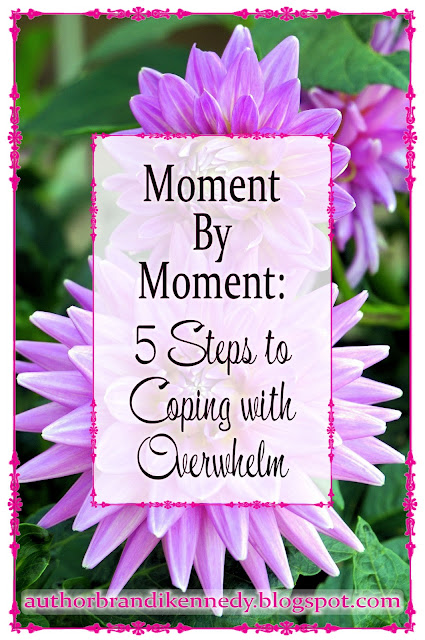 01. Prioritize.
Sit down with real paper and a real pencil and perform a brain dump. Go through your life in your mind and write literally everything down. Work, school, health, kids, parenting, shopping, business, ideas, books to read, pick up the dry-cleaning, car maintenance, whatever. Go through each area of your life and think about it, making a full list of everything that pops up in your head. Then, look through the list and organize it to find the things that are truly most important. (And stop rolling your eyes and thinking about how you don't have time to make a list. You've been doing it in your mind all day long already, which is why you haven't gotten much done. So at least if you make the list on paper, you don't have to repeat it in your head over and over again in fear of forgetting something. Just try it. If it doesn't work for you, you'll have lost 30-60 minutes, and you know you've wasted way more than that much time on other stuff. Just try it.)

02. Ignore The Pile.
When my kids were little, I didn't waste any time teaching them to begin cleaning up after themselves. I am an anxious person and disorder makes things worse for me. I need everything to have a place, and I need everything to spend as much time as possible actually in the appropriate place. By the time my kids were three years old, they were able to hear the words "clean your room" or "pick up your toys" and make the wish a reality no matter how big the mess was or how much fun they'd had making it.

But they can. Because I took the overwhelm out of the mess. I would see them look around their rooms with big, helpless blue eyes, shocked at the state of the room and the size of the mess. How did all these toys get everywhere?? What do I do?? And I would sigh, sit down on the floor with a book, and tell them to ignore the whole wreck.

You can do that, too. Now that you've written it all down, you can feel free to drop it out of your mind and stop looking around at the mess. You can't clean it all up at once anyway - you know it and I know it. You're only just a human. Isn't that what your overwhelmed heart has been screaming all this time anyway? So listen. Stop kicking yourself, grab your top five, ignore the rest of the list, and lets make this clean-up less scary.

03. Simplify Tasks.
When my babes would get overwhelmed at the sheer volume of mess a joyful child can create, I always loved seeing the shock on their faces when I told them to "clean their rooms" and then followed that with the simple command to "leave the mess." At first, they always had a hard time understanding the way those two commands fit together - but they do.

In time, I taught them to solve the problem of the mess without drowning in the size of it - by picking up up on toy at a time. Sometimes we literally went one toy at a time. A barbie, a block, a book, a teddy bear, a book, a polly pocket, a lego. One at a time, with the child gleefully choosing each toy, perhaps playing with it for a moment, turning it over in their hands. I would say, "Now, where does that go? Can you put it away?" If they could get to the drawer or basket where the toy went, they put it away. If not, we set it aside and chose another toy.

Other times, we went in categories - we'd actually pick through the mess to find all the barbies first. We'd leave all the books, all the blocks, all the play dishes and pretend foods ... everything. Then, we'd pick something else and find all of that.

It made cleaning up a sort of game, where the overwhelm of such a huge mess just stopped being a factor. We chose one task, we did it, then we chose another. In the same way, tackle that top five list you just made from your brain dump. Pick one thing from your top five, and do it. Don't focus on how long it takes or how hard it is or how many other things you could/should/would rather be doing. Just pick that one thing and do it. Throw yourself into it. Do a good job. Get it done.

04. Give Yourself Permission To Fail.
No one succeeds every single time, at every single thing. It's not uncommon for toddlers to fall down, for new recipes to taste gross the first time, for fighters to sometimes get their asses handed to them. The old saying is true: You can't win 'em all.

You can do this. You can clean the mess up one toy at a time, clean the house washing one dish at a time, do the laundry folding one shirt at a time. Pay the bills one gig at a time, or one hour at a time.

And if you've got a lot on your plate? Know these two things deep in your heart, which are both borne of irrevocable and inarguable truth.
Besides, even if there's an elephant on your overloaded, giant-sized plate ... you can only eat that elephant in one way.

One Bite At A Time.