By Brandi Kennedy - May 23, 2018
I speak on mental health all the time now, but when I was younger, I had a very different view of mental health, mental illness in general, trauma healing, and victims of abuse. I recently saw one of Andrea Lausell's #SpinaBifida videos where she talked about internalized ableism and the way disabled or ill people aren't always very compassionate with themselves.

I listened to that video showered in shame, not because of the content of the video specifically, but because of the soul-deep way I related to the message. Andrea talked about "ableism" in a way that made the concept very real to me, especially in light of another video I'd recently watched where one of my favorite YouTubers was talking about the way she had internalized homo/bi-phobia before she came out to the world as bisexual.

It made me think back on recent appointments with my therapist and shake my head at myself, smiling a little. My therapist is right - I need to practice self-compassion. Because when it comes to someone else I care about going through something hard, I'm the person to hold their hand, walk them through, and cry beside them. I'm the person who will love them and coach them and offer endless encouragement.

But when it's me? Well, that's a whole different story. 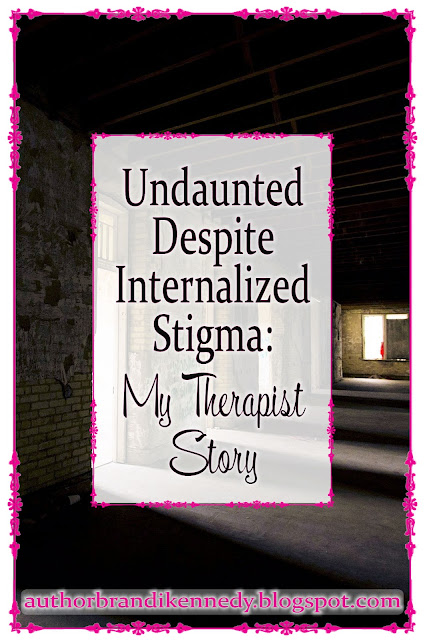 I've mentioned before that my first memory is dissociated - an out-of-body memory in which I see myself as if I were watching me instead of being me. It's like a flash in my mind, a snapshot; there's no sound, no fear, no feelings really. I've examined this memory a thousand times in my mind, and I can't find a feeling other than sad curiosity. I can't find a feeling that someone was or wasn't there with me I can't remember what happened before, or what happened after. That was before my parents divorced. I was probably somewhere around four years old.

Over the years I learned, as my physical health problems began to intensify and no one offered answers that made me feel better about what was happening, to internalize an incredibly deep sense of shame and embarrassment. I was broken. Wrong. Bad. I misbehaved - I talked back. Sometimes I would hide things that weren't mine. I struggled to cope. My parents would fight over who got to keep me, then they would fight again. In and out of court, I began to feel as if they weren't fighting over who got to keep me, but over who had to keep me. I felt unwanted and unloved, and I internalized that as the image that was inherently ME.

My parents healed from their divorce, dated, and eventually found new partners. They married people that they loved, people that they believed loved them. People they believed could and would love my brother and I, too. But through those marriages, I internalized coldness - not only toward myself but toward others.

My stepfather was a violent and horrible person, a convicted felon who was anything but rehabilitated. He beat my mother, my brother, me. He threatened my father. My grandparents. As a child, I hated my mother for opening our family to him, for choosing him, for not noticing he was a bad man. I hated her when I was afraid, when I was sad, when I was hurt. And I hated her for being weak, for staying with him. I was somewhere between 7 and 9 years old, still very young ... I didn't realize back then that she was probably terrified. I know he had threatened to kill her if she left him, that he threatened my brother and I. I know that she believed him, that believed herself trapped. It was only after he was arrested and taken into custody under several conviction that would imprison him for decades that she was able to find the courage to divorce him. She's never been the same. And forgiving all of it now that I understand ... well, it doesn't give me back the time.

My stepmother suffered from mental illness. She would be okay for a while - strange but okay - and then she would just ... lose it. I didn't see behind the scenes, the cycle of times when she took her meds against the times when she wouldn't. I didn't see my father loving her anyway, protecting her even from herself, nurturing her. What I saw was a foolish crazy woman in control of a man who didn't protect his child (or himself) from her insanity. I have so many memories of her, all of them from the perspective of a child abused by a "crazy" person. She shamed me for my health problems, shamed me for everything from the way I looked to the way I always wrote too small. When I got older, she apologized patronizingly for "whatever I thought had happened." She wanted to be like a step-grandmother to my children - even after she and my father were divorced. I didn't allow it. I forgave her because I can understand, because now I have my own mental illness to cope with and it isn't always easy ... but I refuse to allow my children to ever feel unprotected.

My step parents are both dead now, and I've made my own share of mistakes. I've chosen abusive partners. I've been a less than perfect mom. And I lived a good 30 years of my life ashamed of everything from the way I looked to the way I was raised to my grades in school to my poor upbringing.

Then I realized I had PTSD. Complex PTSD. I was suicidal, trapped in a situation I didn't want to be in but couldn't see a way out of, and I had surrounded myself with toxic people and toxic relationships without even realizing it. Relationships and people who confirmed my worthlessness, my powerlessness. Those who sought to encourage me often lost patience with me.

The shame grew. The depression grew. And I needed help.

But I had one other battle to conquer. I couldn't go to a doctor because they would give me medications. Medications that might numb me, the way they numbed my mother so many times over the years. They might make me crazy, the way they did when they couldn't save my step-mother from the demons in her mind. Or they might give me the out a part of me so desperately wanted. A bottle of something that would solve all my problems by making sure I didn't have to wake up to them anymore.

And I couldn't go.

I couldn't go to someone who could give me pills. My oldest daughter is currently 14 - I was 15 when my mother attempted suicide in front of me. I needed to protect my children by making sure I couldn't go there, so I avoided doctors, mental health professionals.

But I was thinking, researching, learning. Through sites like BetterHelp, I learned the differences between certain mental health professionals. learned who could "throw pills at me" and who could help me work through what was in my mind. I learned the differences between the subsets, learned who would offer me what, and thought about how best to match my needs with the right professionals who could meet them.

In therapy, I did learn about working through what's in my mind. But I also overcame the last internalized stigma destroying my mental health - the need for medication. It was in therapy that I learned to give myself grace and understanding, where I learned not only how to ask for help, but how to accept it. And while I'm a long way from healed and still have loads of progress to make ... it is because of that first step that I am so proud to be Undaunted.

Note: This post is a partnership with BetterHelp.com, in conjunction with my love of their site and content combined with their love of giving people a better, more personalized way of accessing quality mental healthcare. All thoughts, opinions, and ideas expressed in this post are my own - and as you know, I would never recommend any site, service or product I didn't authentically love.
BetterHelp Blog Posts