Accepting What Is, Part III 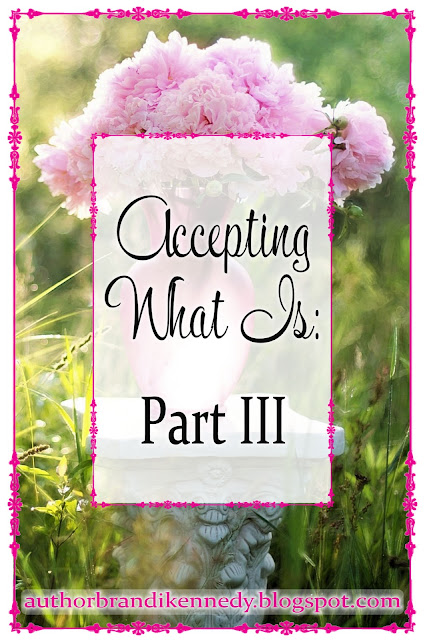 One of the hardest things about being a trauma survivor is having to live with the repercussions of surviving. It doesn't matter if it's military service, rape, a car accident, or serious health-related trauma like cancer, limb loss ... whatever. The source of the trauma is generally in many ways temporary, even when it's something as lasting as losing a leg.

Think about it. The physical pain recedes as the physical wound heals. The skin closes, reseals, grows back. Scarred, probably, and not quite the same ass before, but it heals. The danger of infection passes with this healing, the possibility of gangrene dissipates. Often, the need for ongoing medication intervention passes. The wound fades into the past, the body adapts and forgets the trauma. But the mind? Oh, boy does the mind remember.

In keeping the same example - the amputated leg - the mind will remember the presence of the leg, the presence of the wound. "Phantom pains" are a thing, pins-and-needles sensations are not uncommon due to nerve damage. And even that is still mostly physical; at least, the sensations are. But mentally, there's a fear left behind that never heals. If the lost limb was due to, say, an accident, then not only is there likely to be increased fear and anxiety in relation to vehicular transportation and safety, but imagine if the person who lost their leg was the driver in an accident where someone else lost their life. Sure, the driver only lost a leg, and physically the damage can be dealt with. But the emotional damage is not something you can put a cast on, inject with lidocaine, or cut away. You're stuck with it, forever.

So if you were beaten as a child (like me), you might always be extra tense in the presence of anyone bigger/taller/stronger than you are. If the people who beat you were people in authority over you, then maybe you were low-key afraid of every teacher you ever encountered and the mere sight of a police car in the lane next to you on the road is all it takes to signal the beginning of a full body sweat complete with trembling hands, chest tightness, and shorter breathing. If any one of the people who abused you suffered from mental illness of any kind, you might live in toxic fear and shame of your own mental illness for much longer than necessary, and then walk around burdened over the guilt and shame of having taken so long to seek help.

If you were molested, or even had someone attempt to molest you, or if you suffered any sort of genital/pubic/reproductive injury, you'll live with certain differences in your sexual drive, preferences, and abilities. This may or may not have significant mental/emotional impact, which may or may not exacerbate the problems, leading to increased anxiety, decreased pleasure and desire, avoidance behaviors, and troubled interpersonal relationships. If the person who molested you or attempted to molest you was someone close to you or someone in authority over you, this increases everything mentioned in the previous paragraph. If you were molested, there is guilt and shame leading to intense self-flagellation: "I should have said no, should have fought them off, should have screamed, shouldn't have been there ..." And even if you did all those things, even if you protected yourself, then you might still live with the guilt and shame of someone else suffering what you avoided.

If you suffered the loss of someone close to you - whether through natural death, health-related incidents, criminal death, war-related death, etc. - then that grief will change you too. If you saw the death but couldn't stop it, that's worse. If you suffer survivor's guilt, that's worse. Even in other attachment-related traumas such as foster care and/or adoption, the emotional issues remain long after the physical aspects of the situation have been resolved. People experiences circumstances such as these often have issues with attachment to others, often have a certain distrust or fear of loss, and frequently avoid close relationships due to the "what-if" anxiety.

If the trauma you experienced was repeated multiple times, such as in cases of child abuse, molestation, or war-related incidents, then all of this is often compounded exponentially, making even basic life tasks exhausting or even impossible.

And yes, there are blessings in it. Because of my hypervigilance, I am more cautious, more watchful. I can't be sneaked up on very easily, which makes it much less amusing for my kids to try and scare me. Because of my experiences, I am more understanding, more compassionate. Because my trauma left me with multiple invisible illnesses, I am less prejudiced against others.

And yes, I do have good days. I have days where I'm mostly functional - I get a bunch of writing done, while the laundry washes and the dishwasher runs, I make phone calls and answer emails, I create to-do lists and check some things off. I play with my kids, get some good sleep, actually enjoy the food I eat.

But there are bad days too. Days when I see that the bathroom needs cleaning, and I'm sad about it and ashamed of my lack of energy ... and yet I can't get myself to do it just now. Days when I force myself to do it because I felt like crap about it yesterday (and the day before?) but couldn't get it done. Days when I have to walk myself through the day moment by moment, and by end I'm so exhausted just from having to mom my kids and people my people that I don't even have the emotional energy to take a shower. Days when I braid my hair because that's easier than washing it.

But I'm trying. Due to my past experiences and the way they still have a very real impact on my present life, I know I have somewhat less to offer than others. I know I get tired easier, that I have less emotional endurance, that I have a frustratingly short memory and attention span, that I sometimes get a little too obsessed over things, that I have trust issues and tend to take things personally.

But knowing these things? Knowing myself the way I do? That's all part of learning how to cope with what I'm made of, how to use the body that I'm living in to the best of my ability, and how to soothe the legitimate, real wounds of the mind that continue to exist even if other people can not see or will not acknowledge them.

If you're following along with this post series, you might be wondering by now where it's going or what's the point. Stick around for the next part of Accepting What Is, where I'll share a bit more of how my past may be gone - and yet the ghost of it still haunts my life in irrefutable, inescapable ways that impact my life and my family every day.