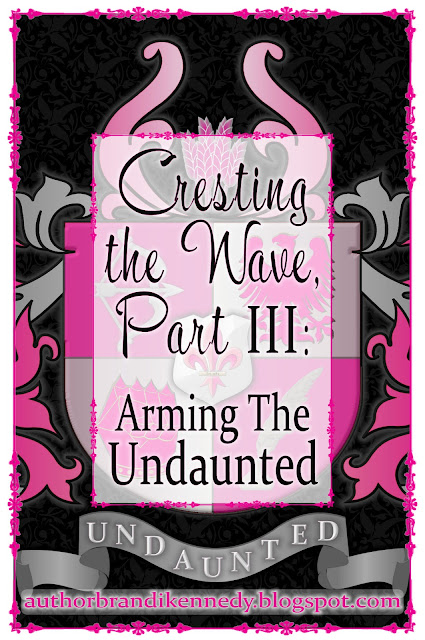 In the last few posts here, I've been hinting at something I've been super excited about lately. I've had a ton of stuff changing and going wild in my personal life (if you're the praying type, my mom, my aunt, and my family in general would greatly appreciate your prayers), and as a result my stress has been high, my pain levels have been just on the edge of unbearable, and my psychological symptoms are much worse than usual.

I needed something to distract me, a way to exercise my creative muscles in a different way than usual. So instead of working on catching up my writing tasks (I'm almost there though) or beating myself up for how abysmally I've failed at accomplishing my goals this quarter, I let myself get sucked into researching Meghan Markle's Coat of Arms, given to her by the Queen of England when Meghan Markle married Prince Harry. I let myself be drawn into the romance of the tradition, the magic of the symbolism. And then I let myself spend some downtime brainstorming how I might create a Coat of Arms for the Undaunted - for you.

I've already named my readers the Undaunted Army, already changed my language from "subscribe" to "enlist," and I've even changed the format of my Patreon account so that subscribers there are now purchasing their Undaunted Army Officer Commission - complete with rank titles, exclusive perks, and even Army-only merchandise.

But I wanted something everyone could get their hands on, even if they don't want to receive email updates, sign up for a monthly subscription to my Patreon, keep in touch through social media, or even fall in love with the characters in my novels. So much of my content is locked behind dollar signs or subscriptions of some kind - but this blog has always been and will always be free to read. I love that I can share my story through my writing here, that I can use my writing gift to hopefully bless others with the tips and strategies that work for me.

I wanted a way for those readers to engage, too - aside from commenting, sharing, and emailing. I wanted merchandise all of my readers can get their hands on, a way for readers who love this blog to help spread the word about it.

And a Coat of Arms? Well, that fits perfectly, both with my love for symbolism, tradition, and familial community, and with the "Army" style branding I've chosen to adopt. The Coat of Arms is symbolic in so many ways, both as a source of history as well as a way of showing pride and community. Traditionally, the Coat of Arms was used by knights and soldiers - literally emblazoned on a fighters shield as a way to identify him. Later, Coats of Arms became a sort of heirloom, passed from a soldier to his oldest son, etc - and the crest atop the Coat of Arms became a sort of family tradition in many cultures.

It fits the Undaunted community so well. So, working together with a friend of mine who has a sharp eye for design and a willingness to tell me how I could improve the idea, I created this: 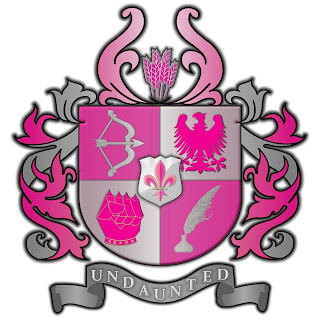 As mentioned before, the symbolism in a Coat of Arms in general has always been something important to me - long before I ever thought of creating a Coat of Arms for any personal reasons, I loved the romance of so much personal meaning all in one place. So without further ado, here is the breakdown of symbolism behind the Undaunted Army Coat of Arms.


THE COLORS:
Pink is pretty self-explanatory - Pink is part of my general brand, both in my novel-publishing and in my writing here. It is both a nod to my feminine nature and desire to nourish myself, my daughters, and my community, and a general choice simply because pink appeals to me. I chose grey/silver for my brand for several reasons: one, because it looks nice with the pink; and two, because silver and stainless steel are my favorite metals.


THE SHIELD, RIBBON, AND FLOURISHES:
For this, I chose a simply shaped quarter-divided shield because I like things to be simple and clear. However, to reflect my love of things pretty and stylized, I chose to have my simple shield backed with flourishes. These particular flourishes remind me (depending on the mood I'm in when I look at them) of the uncontrolled determination of the wild rise and fall of the ocean and the unbridled power of a fire once it reaches full steam. Occasionally, I see leaves in the flourishes too - for me, a revolving symbol of the way life cycles through phases, dying out in autumn only to feed and create rebirth and new life in spring. Below the shield is the ribbon bearing the word UNDAUNTED, a word which has come to hold great meaning for me personally and one which I hope my community would be proud to embrace.

THE BADGE:
Front and center on the shield of the Undaunted Army Coat of Arms is a simple silver badge bearing a fleur de lis, the common stylized lily created of three petals bound together. Lilies are my favorite flowers (the calla lily, specifically), but I love the fleur de lis specifically for several reasons. One, it's a simple representation of my why, with the three petals representing myself and both of my daughters, bound together by blood and familial loyalty. More symbolically, it could stand for the Holy Trinity, the center of my Christian faith, and a specific credit given to God; in this representation, the binding cord represents the Virgin Mary, of Mother of Jesus, chosen by the Father, endowed with the Spirit. Beyond religious purposes, the personal meaning of the fleur de lis is deepened by the concept of the individual petals as being representative of faith, wisdom, and chivalry - all qualities I hold dear as the seeds of hope, honor, and integrity. My specific choice of the French style over others (the Italian style with included stamens, for example) reflects back on my longtime love of France and the French culture and language.

STAY TUNED FOR more information to come about my plans for usage of the Undaunted Army Coat of Arms both in merchandise and in ways to grow activity among the Undaunted community; in the meantime, find out how you can proudly sport your own Undaunted Coat of Arms here.