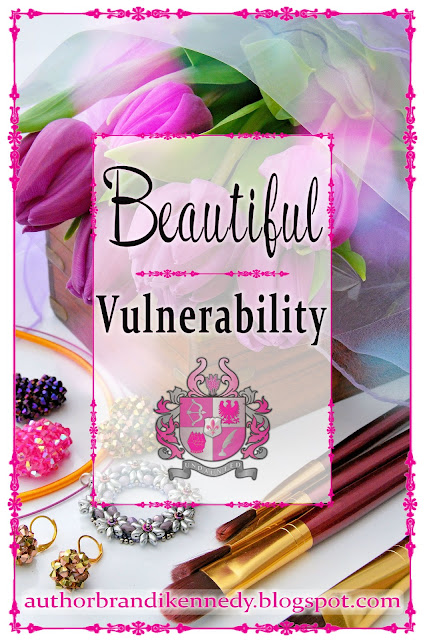 You guys know how I love blogs, books, music, movies, and all sorts of motivational content - especially podcasts, and especially motivational personal development podcasts. One of my favorites is the Your Kickass Life podcast, which I've been listening through for ages now. Sometimes I go through bursts, where it seems like I've heard so many episodes all at once that I'll never forget the sound of Andrea Owen's cheerful voice and totally realistic way of putting herself out there for her listeners Other times, I'll take a break to process whatever I've learned, or I'll hear something so profound that I just have to turn it off and let it sink in.

Oftentimes, I'll write down my favorite quotes for later inspiration, affirmation, or material from which to grow my own content - and here's one of my current favorites:

"A lot of times, I believe that we view vulnerability as black or white ... either we get completely naked on the first date, or we don't date at all." -- Andrea Owen

I've talked about something very close to this idea before - certainly not in those words, but in similar ways. I've mentioned it in friendships, in relationships. And yes, I've talked about it several times here, in various posts exploring how much I hate it when people see the things I've lived through and survived, or the challenges I'm still facing every day, and they label me "fearless."

I am not fearless. I have Post Traumatic Stress Disorder, which means my life is an exercise in being at high alert at all times. When I walk through parking lots, I'm examining the people and the cars around me. When I walk down a hallway, I'm watching behind me almost as carefully as I watch in front of me. I don't sit with my back to doors or windows for the most part. I'm on such high alert all the time that I hardly even have a scare reflex anymore - my family has made a game over the years of trying to sneak up on me, because it's a huge accomplishment for them if I don't feel them coming. Hypervigilance is my life, a constant state of being on guard, being watchful - being anxious.

I am not fearless.

I think sometimes people just see me that way because I keep going as much as possible - even my guts are burning with fear, when my muscles are weak and tired from trembling, when my heart is racing and my head is aching. I'm still trying to move forward, even if it's just baby steps, even when it's just a little at a time. I accept defeat sometimes, and I have accepted the disability rendered by my stack of chronic health issues - I've even accepted outright failure more times than I care to count. But none of those things means the same as "giving up."

Because without me - and others like me - being willing to stand up and say, "Yes, I've been there, I've endured that, and I survived," then how can we expect it to mean anything when we say, "You'll be alright, you're strong, don't let this get you down."

It's not easy to admit weakness, to admit hurt, to admit struggle. It's hard. It's embarrassing. It's painful. But in a lot of ways, it's also healing ... when it's in balance.

Check back in a couple of days to see how I keep my vulnerability at just the right balance for me - and some of the ways you can learn to get yours in balance, too.

If you liked this post? Drop a comment below - I'd love your feedback, as well as the chance to interact with you! It would also be great if you could share the link to this post with your friends - it helps me connect with new readers and bring new exposure to the Undaunted Army and what we hope to accomplish! Be sure you check out my quarterly giveaway page, too - there are several free and easy ways to enter - and members of the Undaunted Army are always eligible for extra entries!