The Interplay of Ableism and Invisible Disability, Part I 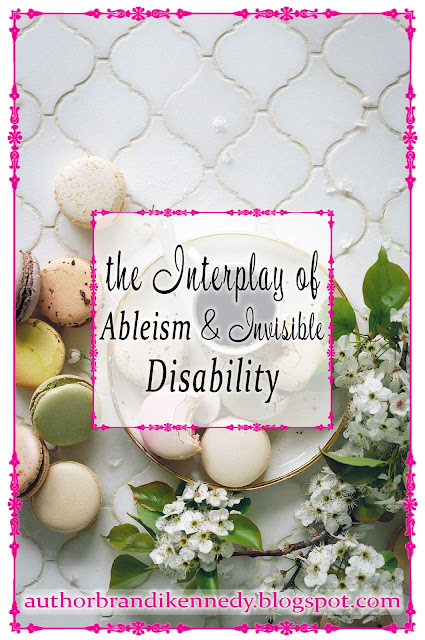 Disability - Visible VS Invisible
My mother is a disabled woman. She has been disabled since I was a child, through various events that left her psychologically scarred and physically maimed. I was in elementary school when she developed a blot clot, which was making its way up to her brain when it fortunately got lodged in her left shoulder.

She didn't die of a stroke, but the clot cut off circulation to her left arm, and she ended up losing several fingers; the tissues were starved of blood. She had to go home in the care of a severely abusive husband, and watch her fingers turn black with rot. She's told me a thousand times how horrible it smelled, how terrifying it was to wait, watching, to see how far back the tissues were damaged. For her, it has been all downhill from there, with heart attacks and other vascular issues that compounded each other and impacted every other aspect of her physical health. And between a horrifyingly abusive marriage, the trauma of her health circumstances, and having to deal with life as a disabled single mother with two children who had chronic health and behavioral issues of their own ... Well.

My mother may be disabled - and I've said more times than anyone could count that I lacked a great mother figure growing up - but my mother is also a hero. A warrior. It's true that she wasn't the best mom and she wasn't always there for me the way I needed her to be, and she still has lots of issues that make her ... well, a handful, to put it mildly. But she was doing the best she could at the time with what she knew at the time - and while I didn't recognize that then, I know it now because I'm doing the best I can with what I know as I raise my own children. My mother's strength is how I became who I am. Her example of determination and resilience is how I learned to survive. And her openness with so much of her story and what she's been through is how I learned to keep pushing forward. Because she has always done that, and because she still continues to do so.

And as much as I might hate to admit it sometimes (especially when I take my cocktail of medications that looks more and more like hers), my mother and I have a lot in common - beyond the honor of a strong spirit and a willingness to keep trying. We both have complicated physical health issues, complicated mental health issues, complicated lives filled with challenges we didn't necessarily want or ask for, and the trauma of multiple abusive relationships we might not have chosen if we had known better.

Yeah. My mother and I have a lot in common.

But with all that being said, we do have one major difference, which changes everything when it comes to living and coping with disabilities. My mother's disabilities are visible - she's missing several fingers. One arm is smaller, shriveled, atrophied. She's weak and frail and unsteady. And for all the fire in her spirit, the declining flame of her lifetime is undeniable.

Me? Well, my issues are largely invisible - which leads me to the topic of this series: coping with ableism (and yes, even when it's internalized) when your disabilities aren't visible enough to satisfy society.

I've already written here about accepting limited or lost abilities, and in the last few years, I've been on a pretty tough journey of living that lesson. When I wrote about my journey to PTSD diagnosis, I was still dealing with the shock of realizing I had something much more serious than just a couple of quirks and some perfectly acceptable depression/anxiety issues. Realizing I had PTSD was a game-changer for me ... it changed how I looked at myself in some ways. On one hand it increased the burden of shame I live with due to the circumstances of my life and what I've experienced, but on the other hand, it gave me more compassion for my own journey.

Perhaps most importantly, it also broke something inside me that I've been trying to put back together in a way that can be helpful to others.

But it led so much of the rest of my life. It led my relationship choices, led my parenting choices. It impacted my ability to set healthy boundaries, to stand up for myself, to advocate for my needs. And what's worse, my mental health often stood in the way of my ability to make necessary progress toward watching out for and bettering my physical health.

Some of that was anxiety, some of it was the lack of motivation inherent to the depression that rules so much of my life. But the rest? The majority reason I didn't seek treatment sooner? That's easy. Ableism.


Ableism & The Invalidation of Invisible Disability
I know, it's kind of a ridiculous term ... but the concept behind it is solid. Our society might have been built on brotherhood and a willingness to look out for each other, but the spirit of that is not nearly as healthy these days, a fact to which I can personally attest.

And because you can't see those things, it's easy to assume they aren't there, that they aren't impacting my life and my ability to cope well on a daily basis. It's easy to assume that if I was more active, I'd have less issues - which might be true in that my weight probably does exacerbate some of my symptoms, but no amount of weight loss is going to reverse the disabling neurological damage of the issues I've been dealing with all my life, and no exercise program is going to erase thirty years of inferior medical care for issues that I wasn't even told were driving my health into the ground.

But that doesn't mean they aren't there. And my having less ability to perform doesn't (or shouldn't) negate the effort I put in or the way that effort impacts my moods and energy levels. My illnesses and the symptoms they create are not all in my head. They aren't invented or made up. They're invisible for the most part - but they're no less real. And they're no less serious. My illnesses aren't always visible, but my symptoms have never been caused by laziness - and my lessened abilities do not equate to a lack of desire to contribute something valuable to the world around me. And while my physical health can be mitigated in some ways, as can my mental health, the problem is the way they work together with each issue complicating the others.

I have PTSD. It's not just a bad day, a bad mood, or the need for an attitude adjustment. The presence of PTSD in my life is not due to an unwillingness to look on the bright side, and the depression I live with isn't because I choose to lay in the dark and feel sorry for myself. The same goes for my physical health issues; while they're probably worsened due to ignorance and lack of proper care, they aren't caused by anything I could help - because they mostly stem from a life-long birth defect that has no cure, often has serious complications, and almost always requires ongoing surgical intervention. Most importantly, while I have learned to camouflage and mitigate my disabilities as much as possible (which has sometimes led to people not even knowing I was dealing them) over the years, this doesn't erase them or invalidate them - they're still there, playing off each other.

Sometimes I can't do the things I want to do or can't accomplish the goals I set for myself. Sometimes that's because I'm in pain or I'm overwhelmed with doctor's appointments or I'm so fatigued I can't barely think straight or my legs aren't working well that day or I'm dealing with kidney pain or ... the list goes on. But regardless of the cause of the limitation, the result is the same - it's always a blow to my mental health, a source of discouragement, a dark cloud hanging over my head. So I mope, I isolate, I lose motivation, ruminate. It exhausts me - so I sleep more, cry more, move less, and decompensate. Which means my already stiff and painful joints get worse, my fatigue gets worse, my back gets worse ... and the cycle goes on. Which is where the effect of ableism comes in.

The problem is, there's not a way to "push through" disability. While it's true that inactivity due to dips in my mental health causes worsening of my physical health symptoms (or vice versa), it's also true that as much as I wish it could work the other way, it doesn't. Check it out:

Stay tuned for the next post in this series, where I'll talk more about how ableism impacts people living with chronic illness (especially invisible illness) - and I'll also share how you can make sure you're not accidentally insulting or discouraging the people in your life with behaviors you might not realize are coming off as unintentionally ableist or otherwise hurtful.