The Interplay of Ableism and Invisible Disability, Part II

By Brandi Kennedy - July 31, 2018
In my last post, I talked a little about ableism and how it impacts those in (or on the outskirts of) the disabled community. In this one, I'd like to go deeper into what ableism really is, using real-life examples and explanations about how ableistic thoughts and practices can actually be harmful by discouraging and disempowering people struggling to cope with chronic illnesses. So without further ado: 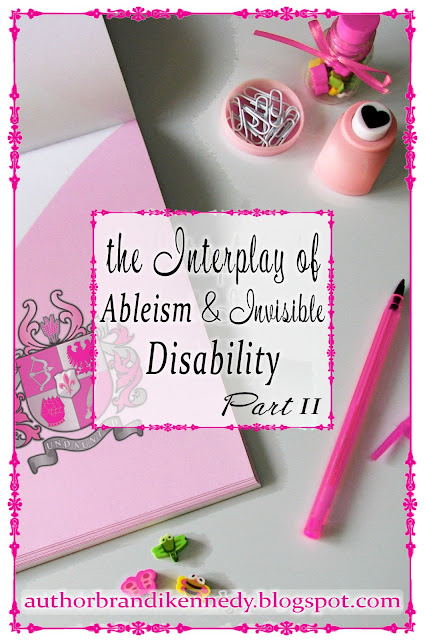 Ableism is telling someone that they could "get better" if they just did (or didn't do) XYZ. Telling someone they wouldn't be sick if they stopped eating meat or if they started getting out more is not only emotionally harmful to someone already struggling with symptoms they didn't want and may not be coping well with, but following advice like that could actually end up being physically harmful or causing unintended setbacks. Example: a person with mental illness who is frequently told that their illness is "all in their head" (which is a pseudo-kind way of suggesting that the illness is made up) and that they would feel better if they would get out more. Which is bad advice because: this person with mental illness might not get out much because going out is actually a high-stress event for them. Maybe they stay in a lot because that's actually what makes them feel better. Invalidating their experience because it doesn't align with yours is not okay. Not to mention, suggesting that someone would be "better" that simply is like:


With my own illnesses, one of the issues is that I have chronic back pain that often makes it hard to walk long distances, sit or stand for long periods of time, or do a lot of strenuous lifting, bending, stooping, twisting, etc. I have issues with weakness and cramping in my back muscles, and while I know that working out, losing some weight, and being more careful of my posture might be helpful, I also know that working out usually entails lifting, bending stooping, twisting, and high impact movements that are often unbearably painful for me, if not in that moment then for days afterward. And I don't mean that kind of hurts-real-good pain that you get after a solid workout session - I mean the kind of oh-God-why-can't-I-just-die pain that leaves you unable to sit, stand, or lay down comfortably, rendering you unable to rest, heal, or cope well with daily life. My activities are limited by my chronic spinal issues, and those limitations have an impact on my weight that can't be denied - but also can't be as easily changed for me as it might be for some others. Even something as simple as postural work is often painful and likely to be ineffective for me, as no amount of muscular work or postural awareness will change the actual shape of my incorrectly formed vertebrae.

But I've been living with increasingly worsening pain and other neurological symptoms for most of my life, so I've learned to cope in the best ways I could find. Still, not having a diagnosis all that time doesn't negate the fact that the illness has been there, lying quietly in the background, steering the course of my life. I only recently learned the real name of the "tumor" I was born with, only recently got confirmation of the major complications that have been wreaking havoc with my body during the 34 years I've been blessed to walk this planet. But no, there is no magic diet, no exercise program, no quick and easy way to "fix" me so that I can be "better." The only options for adequate treatment involve multiple incredibly risky surgical procedures that could leave me even worse off than I am now - or could work temporarily only to need repeat procedures.

You can't see my illnesses, but they are real.

Ableism is expecting someone to be able to perform "normally" despite them literally not having the ability to perform in that way. This often sets a precedent that has compounding damaging effects. Example #1: a person who can walk, but generally prefers to use a wheelchair due to limited tolerance and ability, who is told that if they tried harder or practiced more or didn't depend on or "settle for" using their wheelchair, then maybe they could get out of it sooner - or at all. Which is bad advice because: wheelchair users who can walk but choose to use a wheelchair often do it in order to preserve limited energy resources, minimize pain flares, prevent loss of standing/walking balance, or protect weakened or deteriorated joints, bones, and soft tissues. In general wheelchair users aren't doing it for fun, and they aren't doing it out of laziness because they "don't want to walk."

Example #2: a person who uses medication to maintain control over an illness such as depression, adhd, diabetes, etc., who is informed that they should stop poisoning themselves with chemicals, that depression is something they could choose their way out of, that adhd could be better treated with more solid discipline, and that diabetes would go away if Little Debbie ran out of business. Which is bad advice because: sometimes depression is actually caused by chemical imbalances in the brain that can only be corrected by the use of medication. Sometimes these imbalances are biological, other times they might be triggered by reactions to situational distress. Either way, depression is not a choice, it is an illness - and it deserves effective care and treatment, just like broken legs, gunshot wounds, and bacterial infections. Further, ADHD is not something that can be cured with time-outs and spankings. You can't parent your way out of it, and pretending it isn't there or isn't real only sets children who have it up for failure later in life. The same applies to illnesses like diabetes - whatever the cause, the illness must not be invalidated and the treatment options must not be ignored.

In my own experience, parenting children with invisible but completely real illnesses like ADHD (among others), I've been accused of choosing to "drug" my children rather than "parent" them. I've endured judgment and rude comments from people who don't have ADHD, who don't have kids with ADHD. People who probably don't know that ADHD is actually visible in brain scans, people who don't understand the way ADHD and the variously effective medication options work to improve the lives of children and families impacted by it. People who don't understand that asking an ADHDer (or a person who suffers from chronic anxiety) to "chill out" is close to the same thing as asking a depressed person to "cheer up" or a lung cancer patient to "breathe better." And maybe in some cases they can - in theory - but in actual practice, it's usually a lot harder for that person to do than it is for you to demand.

Ableism devalues the experiences of the people around us, cheating them of the benefits of compassionate, understanding companionship.

If you know someone who struggles with something, don't try to relate to them by minimizing what they're dealing with. Someone who is remarkably thin because of their illness is not flattered when others say things like, "Gosh, I wish I could have what you have so I could eat whatever I want without gaining weight!" Someone in a wheelchair doesn't want you to tell them how cool you think their chair is because "it must be nice to get to sit down all day." People living in chronic debilitating pain are not impressed by the patronizing sympathies of someone suffering from an occasional sinus headache. 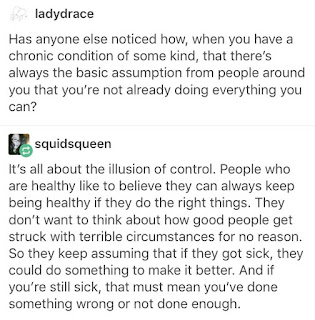 We may not always see someone else trying - but that doesn't mean they aren't.