The Usefulness Of Vulnerability 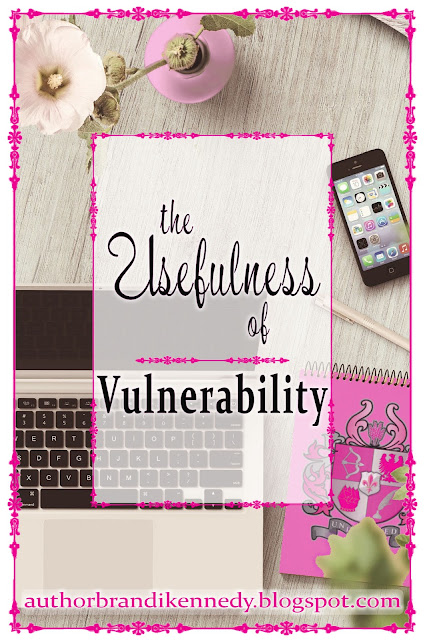 And while I did share some about how fearful I often am due to the chronic anxiety tied to my PTSD, what I didn't necessarily point out is that my ability to accept and embrace the status of my health (both mental and physical) is still entirely new to me.

I have lived most of my life with a certain sense of rage and anger, some of it specifically related to mental illness and those who suffer from it. I am a child abuse survivor - and one of my most damaging abusers was a bipolar patient who would often go off their medications long enough to have complete psychotic breaks. This person was in and out of mental hospitals often - and their many attacks on me have left me with psychological marks I'm not sure will ever heal. Not only because I struggle to trust anyone with my own children, but because admitting and accepting my own mental health condition was incredibly painful for me.

I grieved the lack of total wellness. I grieved the inability to "get over it," the shadows of the past that still loom over me constantly. The little things that trigger emotional flashbacks and poisonous inner monologues, the echoes in my mind of a person who should have made me feel safe but instead made me a personal target when I was a child.

My experiences with mental illness through growing up with my mother haven't been easy either, and the stigma of mental illness and instability was so ingrained that I actually ended up writing books about PTSD long before I actively realized I had it. Accepting my own mental illness was a struggle for me.

Recognizing and embracing the vulnerability in my physical health hasn't been easy either: I've been overweight since I was a teenager, and if I had a dollar for every time someone told me a health complaint was weight-related, I'd be able to out-cash every bazillionaire on the planet.
And honestly, while some of that may have a kernel of truth in it, I can literally remember sitting in an exam room, going through a file folder full of records tracking what I ate, what I drank, what exercise I was doing - I had been carefully monitoring everything for months in a desperate effort to lose some weight, and I was there to beg for help. And the doctor dismissed everything I said, treated me as if I was lying, and suggested that I try some kind of TV dinner diet system.

I stopped going to doctors. If I thought I was dying, I hit the ER, and once walk-in minute clinics started popping up, I'd go to those sometimes. But I left having a primary care doctor behind, because I hadn't had one in years who really wanted to help me or took the time to listen to me. I had completely lost faith in the medical profession - which led me into a lot of self-education. If I had an illness I tried to figure it out myself, tried to figure out how I could help myself. I learned some alternative methods, accepted some unconventional ideas and practices. And for the most part, that worked for me.

For the most part.

So when my mental health got to a point where it could no longer be ignored, where I could no longer pretend to be fine, and I was beginning to see every day as a struggle less and less worth stepping up for ... I broke down. I gave in. I went to therapy.

I shared my story - and I was heard. I showed my wounds - and they were validated. For the first time in my life, I learned to shed shame-free tears. And I know I'll never be cured; PTSD doesn't go away. But I'm learning to cope, learning to mitigate, learning to live around my barriers.

And I'm learning to love my vulnerability.

Embracing my vulnerability and stepping up for myself in therapy was surprisingly empowering - and in time, it gave me the courage to try again. It took several months, but I found a doctor. I kept my appointment. And I hated her.

But I made another appointment in the same office, specifically requesting that I be given to someone who might be a better fit for me - and I found a diamond. I now have a primary care doctor who has seen me cry, who has heard me completely. She's listened to my ailments, investigated the booboos, and treated my vulnerability with compassion. More importantly, she has answered my vulnerability with respect for the strength it takes for most people to show their weaknesses in such a way. She not only listens to my list of ailments and symptoms, but she believes me; she believes I'm telling the truth, she believes my concerns are real.

Because my willingness to be vulnerable with my therapist gave me courage, and my primary care doctor answered that courage with respect, I was eventually able to ask for a referral to a specialist I knew I was long overdue for. I was able to articulate what I needed - and why. Then, once I felt that my relationship was established with that specialist, I was able to explain my other suspicions about my health in a free and comfortable way. I was vulnerable all over again, in a much more frightening, much more significant way - and he made sure I was heard. He made sure that again, I was believed.

He guided me along the next step in my pursuit of better, more solidly monitored health. He helped me find the answers I had been so desperately wanting but too discouraged to ask for for so long.

It's entirely possible that my willingness to embrace vulnerability will extend my lifetime, improve my prognosis, and restore lost quality of living. At the very least, it has opened doors to treatment I didn't even know I needed.

... as you move along your journey to become - and stay - Undaunted.

If you liked this post? Drop a comment below - I'd love your feedback, as well as the chance to interact with you! It would also be great if you could share the link to this post with your friends - it helps me connect with new readers and bring new exposure to the Undaunted Army and what we hope to accomplish! Be sure you check out my quarterly giveaway page, too - there are several free and easy ways to enter - and members of the Undaunted Army are always eligible for extra entries!