Self-Compassion: The Value Of Validation 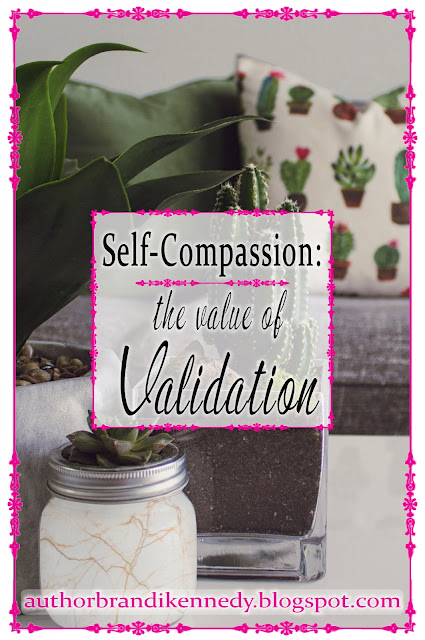 I've been sharing my story in bits and pieces here for so long that this blog has begun to feel like home. Aside from my therapist's office, this blog is the one place in my world where I'm just me. I'll write sad, happy, angry, whatever. I'll share my experience, my pain, my struggles, my strength. I've shared about the heartbreak of miscarriage, the beauty and stress of motherhood both as a coupled parent and as a single one, and I've shared the damage left behind on my life and spirit due to multiple abusive relationships and the impact of chronic illness.

There are only two major things in my life that impact me every day that I haven't shared here - and it's just because those wounds are still too deep to show in public. But even in the midst of the struggles I do share, I am making an effort every time I come here to use my experience to encourage and empower others. It sucks to feel devalued by the people you most want validation from. It sucks to bring insecurities and fears to people whose opinions you value, only to have your words fall on deaf hearts. It sucks to have those fear and insecurities used against you. It sucks to share a victim experience with someone trusted, only to have them re-victimize you by blaming you for whatever you went through.

But owning your story starts with you. It starts with the honesty to admit your struggle, the courage to see it for what it is, the will to explore it actively and process it openly, because you can't fix a problem you won't admit to, you can't clean a mess by pretending it isn't there, and no amount of complaining will solve problems as quickly as getting up and working on it.


Honestly though, I think we all struggle with our own sense of authenticity from time to time. I've mentioned before how my experiences with narcissistic abuse, passive aggressive attacks, and outright gaslighting have impacted me so severely that I now deal with constant self-doubt even when I have irrefutable proof of my concerns.

Example: I have spina bifida. Most of my life I didn't know I had it - I just knew that I was dealing with "a bad back." I have a scar on my back from a surgical treatment I had as an infant, an effort to remove "a tumor" that was "crawling up" my spine. Now that I have an official diagnosis, it turns out that surgery was performed in order to excise the lipoma characteristic of lipomyelomeningocele and release my tethered spinal cord. But my concerns have been invalidated so many times over the years that even with that scar I doubted myself. I told myself the things I had heard so many times from others, that it wasn't that big of a deal. That I was just lazy. Everyone has aches and pains. I should just power through.

I just had a series of MRIs done last month that confirmed my spina bifida lipomyelomeningocele. It also confirmed a re-tethered spinal cord, an 11mm chiari malformation, degenerative disc disease, and sheuermann's disease. These things are all incurable, and they are all only effectively treated with risky invasive surgeries that may not work, may leave me paralyzed, or may work partially, only to need repeating every few years. Because of the risks, the number of issues, and the severity of the compounded impact, I've been told I'm not really a candidate for surgery - despite increasing neurological damage that is now beginning to have a solid impact on my mobility.

And yet ... there is a part of me that whispers, "You're a liar. You made it up. You're seeking attention. It's not that bad. You're just lazy. You're making excuses. You're settling for a less than life. You could do better if you wanted to. Maybe if you look on the bright side and stop being so whiny/negative/self-pitying, you would get better. You need to let go of your victim mentality, especially if you're going to keep selling yourself to the world as a warrior woman living an undaunted life despite the odds. You're such a fake."

I have been struggling with those thoughts for ages now. Fighting it with self-compassion, carrying it to my therapist, setting alarms on my phone to remind me to literally practice positive affirmation. I've been rereading the reports from the doctors that confirm what I'm living with - what I have been living with - in order to refute the internalized abuse. And my physical health is only one example, one place in my life that looks like that. I'm also dealing with those same issues in terms of my mental health, my financial status, my relationship status, etc.

I was really having a tough time. I was feeling weak, sad, battered, shamed. But then I saw this on Instagram, and it changed everything. I thought I'd share it with you.

This quote was the catalyst I needed. It reminded me that I can be both a victim and a survivor. I have survived countless traumatizing experiences and abuses of all kinds. I am a survivor. But I am also a victim of the things I have survived. I am still triggered by things, sometimes unexpectedly, often uncontrollably.

Months ago, I read an article where PTSD was described as a gorilla. I wanted to find that article and link it here, but I couldn't find it. So here's my terribly inadequate paraphrase: the image presented was about unpredictability, brutality, chaos. Kind of a bull-in-a-china-shop sort of thing, but with a pissed-off gorilla instead. Like, sometimes it sits quietly in the corner, scowling into the room. Other times it starts flinging shit everywhere, shrieking and screaming and breaking everything. I related to that in a lot of ways then, but as I've sought treatment and strategies and learned to empower myself despite my disabilities, my gorilla has faded, morphed. I can't say it's gone or that it's settled, because I still have gorilla days more often than I'd like to admit. But for the most part these days, my PTSD is more like ... arthritis of the soul.

It's a lack of emotional grip and flexibility, a change in strength and ability to tolerate stress and change, a constant painful emotional ache that doesn't go away even when I know what it is and why it's there. In keeping with the PTSD-as-spiritual-arthritis, I can say the aching gets worse and more widespread when the "weather" of my life is stormy - it hurts more when the "weather" is cold, when the barometric pressure of my life changes. I never really know when it's going to be a good day or a bad day. And medication helps but it's nothing even remotely close to a cure - medication in itself is an emotional burden.