By Brandi Kennedy - October 25, 2018
The last time I did a tag post using my books to decide which of my characters would be most likely to do certain things, I had so much fun, I've been really wanting to try it again - but with a tag of my own making. And what better time to try that than now, right?

This post will be focused on all things Halloween, twisted in with the various quirks and idiosyncrasies that make my characters so rich and unique as people despite their various similarities. My oldest daughter helped me come up with the prompts - with some input from the youngest as well, of course - and I love the way exploring these prompts helped me think of my characters in new ways that will continue to develop them in my mind even as I continue to write their stories.

So without further ado, I'd like to introduce you to my favorite fiction characters (from my books), Halloween-style. 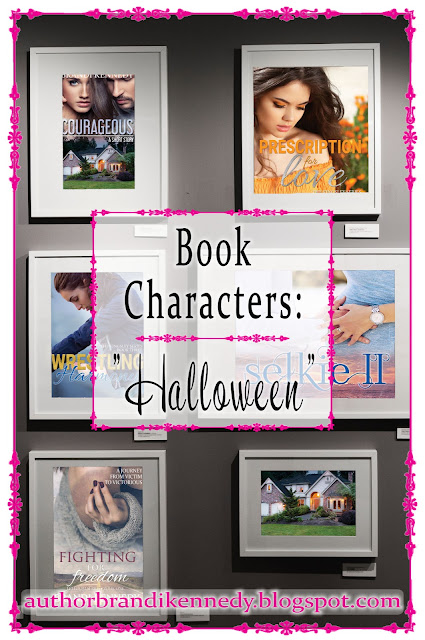 Which character is most likely to terrify trick-or-treaters?
Another easy one - in two ways. Most likely to terrify trick-or-treaters because he's an asshole: Malachi from Fighting For Freedom. In the Freedom Series, Malachi Matthews is a world-class piece of absolute garbage, and he has been since just about day one. He's a bully kid who grew up to be a heartless wife-beater who hasn't yet got his kick in the teeth from Karma. His time is coming though, so we'll move on.

Most likely to scare the trick-or-treaters in a fun way: Angus, the patriarch from the Selkie Trilogy. This guy is huge, beautiful, and most importantly, intimidating. Throughout the series, he gives his all to protecting his clan and his family, even when it means leaving his home, uprooting everyone he loves, and starting over as a persecuted man in possession of a much-hunted female. But beneath the exterior, he's a sweetheart who just wants to protect his people and preserve the Selkie way of life. He'd scare the kids, absolutely - but it would end with hysterics, I'm sure.

Who would have the best DIY haunted house?
This is another hands-down easy giveaway. Eva Kingsley is the matriarch in the Kingsley Series, and while her story has not been told entirely yet either, she's never anything less than a main character in  all four books (so far) in the series. Named after my own real-life Grandmother, Eva is a tough soul with a certain fierceness that commands respect even as her gentle acceptance of those around her makes her so beloved.

Not only is she the leader of her family and the love of her husband's life, she's also crafty and creative - she even made the jewelry for the first wedding I wrote (Prescription For Love) in the Kingsley Series! If anyone could DIY a kickass haunted house, it would be Eva, especially with the help of her husband, sons, daughters, and in-laws.

Who would have the most fun getting scared at a real haunted house?
Finally, a hard one! I'm not sure who would be most likely to have the most fun being terrified on purpose - Brenna, the badass bestie from the Selkie Trilogy, or Evan, the party-boy baby brother from the Kingsley Series. For Brenna, conquering a haunted house wouldn't be much different than conquering her grief over losing her husband, her fears over starting again, or the way she sometimes has to bust heads when people underestimate her. Brenna is loyal, thoughtful, and sweet - but she is also certainly a force to be reckoned with.

Evan, on the other hand, is a brash young athlete - the youngest son of the Kingsley family. With two entrepreneurs, a decorated police officer, and a career wrestler (Wrestling Harmony) among his collection of successful siblings, it's easy to see why Evan might think he's got something to prove to the world. In a haunted house, Evan would definitely be the guy who works hard to appear unphased, even if he's totally freaking out.

Who would be most likely to be too scared to go into a haunted house?
This is absolutely Naomi (Fighting For Freedom). She's a single mom with an incredible story of strength and survival, but escaping domestic violence and ending up in a protective shelter for DV survivors has definitely taken a toll. There's no way she'd go into a haunted house - she's had more than her share of fear already, and being terrified is nothing anywhere even close to being her idea of fun.


Which character would be happiest staying home to pass out candy?
Actually, a good number of my characters fit this question, but here are the two best options:


Who would throw the best Halloween party?
Adam and Eva Kingsley take the candy-corn decorated cake on this one. The way these two love each other and their family despite so many challenges is beautiful - and this bears out in how fruitful their familial connections are with their loved ones. Their party would be fun and safe, normal enough to be comfortable but different enough to be exciting, and open enough to accept people of all ages from several different walks of life. Eva would put everyone at ease, Adam would keep everyone amused and feeling comfortable, and the easy camaraderie of this family would make any party memorable for their guests.


Who would be most likely to skip the holiday altogether if they could?
Cass Keaton (Fat Chance), who would shy away from any public celebration of food and candy, despite her incredible growth as a woman once so self-loathing she was nearly driven to suicide. Cass would love the fun of Halloween and the excitement of all the kids dressing up - but she might be challenged by thought of dressing a body she's not always comfortable in, and you probably couldn't pay her enough to make her willing to sit out in public next to a small mountain of free candy.

She would, however, probably love the chance to turn down the lights, lock the front door, and curl up with a certain sexy member of the Kingsley family for a horror marathon.


Who buys the good candy, and who hands out the cheap stuff?
Hands down, the good candy is purchased by Allie (Courageous). She wasn't exactly impoverished as a kid, but she's worked hard to get where she is as an actress - which means she vividly remembers what a treasure it was as a kid to get something really amazing while trick-or-treating. Now that she can be the star of the show in her neighborhood, she would absolutely take great joy in handing out full-sized candy bars.

On the other hand, if there was a cheap-candy-buying-miser in my cast of characters, it would probably be Rick from Fat Chance. He's the kind of jerk who would make a big deal out of telling everyone his plans to buy candy and do something special for the kids who come by - then he'd set a bowl of the cheapest crap candy he could find on a chair on his porch before going inside and shutting off the porch light.

Directly in the middle would be Christine Matthews from the Freedom Series. She would be nervous but willing to participate - and she would want to give out the good stuff but probably feel saddened and ashamed by not being able to afford anything more than the basics.


Which character is already driving everyone else crazy with Christmas countdowns?
This is totally Landon (Prescription For Love). He would be counting down, reminding everyone that the joy of Christmas is coming. His family would smile and tolerate it because he's completely adorable ... but inside, a fair number of them would be screaming.

Just like me lately - every time Joey tells me how many more days there are until her favorite holiday.