By Unknown - September 02, 2013
It's here! It's finally here! Half Cast, the fourth installment in Lauren Dawes's Half Blood Series is now LIVE! 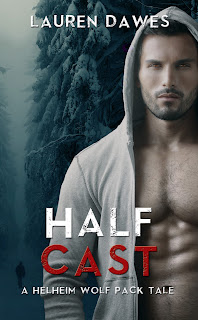 Half Cast breaks from the series pattern, starting up several months after the end of the Half Life epilogue. We're seeing Alex as he's wracked with pain, both physical and emotional. He's been bitten - and the wound is festering, killing him. Or so he thinks.

When Alex is discovered, lying alone near a tree in the woods, we're introduced to a number of amazing new characters. Most memorable is Casey, a cocky little redhead with more energy and bravado than anyone knows what to do with. She's got a soft side, but it takes a very special male to bring that out in her ... and he's an old favorite that we've all grown to know, if not love.

With Alex's determination to return to Buxton and seek out his past love, we're taken back to the Helheim pack and reunited with all our old favorites. Vaile and Larissa are parents now, Sabel and Ivy are happy together, and the Helheim pack is thriving under the strong rule of a new alpha.

This story branches away from the war theme we've been seeing so far too, and focuses instead on the recovery of the Helheim wolf pack. I suspect there is still trouble to come in the series as Lauren Dawes is always anxious to fill her writing with a sense of suspense and adventure, but this book was a breath of fresh air - a much-needed break from the war and the gore (for me personally), and a romantic fantasy come alive in the Helheim world.

This is by far my most favorite of the Half Blood Series, and I can't wait to see what happens next!!

Believe me: you want to read Half Cast. If you're a sucker with a soft heart for lost love, if you're an eternal optimist that believes "love will always find a way," or if you thrill to the idea of two broken hearts finding a way to heal each other, then this is it. This is the book that will win you over to Lauren Dawes's Half Blood Series for good. Go get it - you won't be sorry.