By Unknown - June 21, 2015
When I posted to the blog a few days ago, I had some pretty lofty goals. I figured even I can remember to take time for blogging once every week or so. But then I thought, I will forget to do it on the right day!! Wah, wah, boo hoo!!" But then I thought, "I can do fives. How 'bout blogging on the 15th, 20th, 25th, etc? That could work." I know, I know. That probably actually more complicated than just telling myself to blog on Tuesdays, but whatev.

So yesterday was the 20th, and I should have been here, blogging. And I had intended to, had even thought of a few things to write about. I had a plan. But life gets in the way sometimes, and I was needed elsewhere.

My mother is one of the most unhealthy people I have ever met. She almost literally has everything you can imagine, with the exception of some big things like AIDS and stuff like that. But the "little" stuff? You name it, she probably has it. And now she's collecting bigger diagnoses, like "copd" and "congestive heart failure," and a few others. Well, yesterday she fell and broke her collarbone, and she comes before blogging.

I did get some writing done though, sitting in her hospital room. That's what I'll be doing today too. She seems to take perverse pleasure in watching my disjointed scribbles come together.

So I'll see you again on the 25th (probably) with some updates. And in the meantime, you can find shorter bursts of my presence around the web. I'm on Facebook, Google+, and Tsu.co as Author Brandi Kennedy, I'm on twitter @BrandiKennedy84. And recently, I even joined Instagram @AuthorBrandiKennedy.

And that's all for today's check-in. Until I see you here again, happy reading! 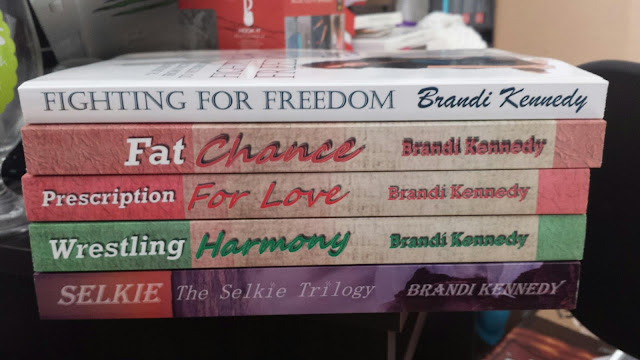