By Brandi Kennedy - August 30, 2015
The excerpt below is taken from the working text of "More Than Friends", the Kingsley Series, book four. The following text is under copyright protection, and may not be duplicated. 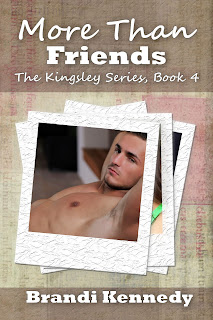 “What are you doing?” she asked.

When he turned, she was standing there again, framed in the doorway of his kitchen, the living room light shining softly from behind her, her hands clutched nervously together in front of her. She had long, slender arms, softly defined from her work at the yoga studio; they met at the wrists, where she clutched her left wrist with her right hand, just above the apex of her thighs. Her eyes were soft, her hair was falling over her shoulders, she looked delicious, and he wanted nothing more than to walk over and touch her. If he did though, he might never stop. Whatever the cause, Michael had experienced a transformation in the way he saw her, and he was afraid she was right – they were no longer simply Friend and Friend. No, now they were Man and Woman, and he was afraid that if they acknowledged the change, there would be no going back. He shrugged, dragging his eyes away from her body and forcing them up to her questioning face. “I’m drinking,” he said, and turned to pour another glass.

“Michael,” she said softly, barely audible even in the silence. He heard the soft click of her throat as she swallowed, and the wet sounds of her mouth as she licked her lips. “What is this? Whatever this is that’s going on, this isn’t us, it's … not how we always were.”

Watching the bourbon fill the glass, Michael briefly entertained the notion that he should stop pouring – that he should mix the liquor with soda. That he needed to slow it down. Still, his hand ignored his head’s command, and then the glass was full. Too late for soda, then, he thought. Might as well drink it. He lifted the glass and took two large swallows, gasping slightly as he felt the liquor burn its way down his chest.

“Why aren’t we talking?” she asked, and he turned at the sound of her voice, watched a tear slip down her cheek. “I don’t know what’s wrong between us lately, but … something’s changed, right? But we’ve always talked before.” She stepped into the kitchen, still watching his eyes, searching his face, and he felt the air around him thicken as she approached.

Slowly, deliberately, Michael raised the glass again and emptied it, his fingers clenched so tight that he wouldn’t have been surprised to have it shatter in his face. It didn’t though, and she was still looking at him when he lowered it. He reached behind him and set it on the counter, not breaking the eye contact between them, clenching his empty hand tight at his side. His chest was heaving – when had he started breathing so heavily? More importantly, when had she? His fingers were shaking when he reached out to touch her face, running the rough nubs of his knuckles down the curve of her cheek. “Maybe there just aren’t words for this,” he whispered.
_______________________________________


Stay tuned for more information about the upcoming release of More Than Friends, where you'll touch base with the cast of the first three Kingsley Series novels -- and you also have the chance to get to know the sensitive but terribly confused Michael Kingsley.
Blog Posts