By Brandi Kennedy - May 05, 2016
Last month I talked quite a bit about Depression and mental illness, with a focus on the Kingsley Series and why the thread of mental health runs so deeply through those books. Last week, I moved into the subject of Hope, and what it can mean for people going through the various stages of human life, what it can change for us all - but only when it brings us together. Only when we share it among ourselves. Only when it spreads from one person to another like the quiet, steady flicker of a flame passed from one candle to another.

You know, it's easy sometimes, to think of Hope as a general concept. A pretty name for little girls, a pretty word to throw around when we need to paint a "silver lining" on something. We tell each other things like, "Never give up hope!" and "There's always hope!" but do we really believe it? Do we believe in its power enough to nurture it honestly? 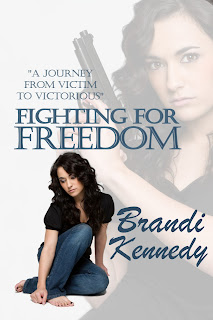 Sometimes, maybe. Other times, not so much. Fighting For Freedom illustrates the difference between the two, in a way that's unimaginably personal to me.

When I was little, my parents divorced. I think I was maybe four, maybe five. I don't remember much about it, which is probably for the best. Knowing my parents, I doubt it was friendly.

My mom dated around a little bit after, and I remember a man she dated. He was sweet and funny, fun to be around, and he loved my older brother and I with all his heart. He loved my mom too, wanted to marry her, but she turned him down because he was younger than she was and she didn't want to tie him down with two kids. She didn't want him to ever feel burdened by her baggage. They broke up.

Eventually, she did remarry, and her second husband nearly wiped out my family. He threatened my father countless times, left my older brother permanently disfigured, and gave me memories so horrible that I can't actually pull them up. I don't remember most of the beatings, but I do remember feeling humiliated as I stood naked in the guidance counselor's office at school. I was in third grade, and the police were there with social workers for Children's services, taking photos of the bruises on my body. I guess it's fortunate for me that I was young enough to be able to repress those memories ... but I look at my daughters sometimes and weep for the little girl I once was. My oldest is finishing sixth grade this year, and my youngest is finishing first. They're generally healthy, generally well-rounded, and secure in the knowledge that they are safe, that they are loved. They're beautiful, smart, and compassionate - and I'm not biased. Outside of our home, they're so perfectly angelic that I can't imagine better children. Sometimes people even stop us to comment on how well behaved they are. At home though, they bicker constantly, smart off, backtalk, and misbehave. They shout, and they get rowdy.

I get frustrated. They get grounded, or spanked, or lectured, as their behavior warrants.

And then they do it again.

Why? Because they aren't afraid to. My children won't repress memories so horrible that they can't be called to the forefront. They won't wonder what must have happened, they won't question blanks in their memories.

But I do, and even as I question those empty spaces of time that my own mind has blessedly chosen to hide from me, I'm thankful for them.

My mom was one of those moms that made dinner and actually served it all up at the table, with serving bowls and spoons and stuff. She didn't just make the plates at the stove. And we were poor, so we had a lot of basic cheap dinners; you know, macaroni and cheese with french fries and hot dogs. She had this big glass bowl, a blue one. It was a beautiful color, deep and rich and vibrant. If I close my eyes, I can see it again, sitting in the middle of the table, lined with paper towels, filled with crinkle cut fries that must have taken her forever to fry up in a little skillet, one batch at a time. If I keep my eyes closed long enough and keep looking back, I see him, my stepfather. I can see his face, that black goatee, fierce brown eyes, the widow's peak of his receding hairline. The tattoos on his hand when he reached out, picked up the bowl, and threw it. I can feel myself ducking (I have always wondered if he was aiming at me, and if it would have hit me, had I not been watching), can see the bowl coming toward me, feel it whiz past my head. Hear it shatter in the hallway behind me. I'm thankful that I can't remember whatever came next.

He wasn't shy about it, either. There are other memories, and not all of them are locked in the quiet privacy of whatever passed as a "home" back then. In another one, I'm standing outside. The sun is warm and I'm in the yard; there's a car beside me. Maybe we were about to go somewhere? Or maybe I was just outside playing, I don't know. I can't remember. All I have is a vision, like a snapshot, a mental Polaroid. She's on the porch, my mother. She made him a sandwich, bologna and cheese. I'm sure it was on white Merita bread, sure that it was Oscar Meyer, sure that it was a Kraft yellow American slice. Sure that it was Miracle Whip. What I'm not sure of is this: was there too much Miracle Whip? Or not enough? To most people, that might not matter. It's just a sandwich. But to him it was something much more. Worth the trouble. Worth the anger. Worth the rage. Worth leaving a small girl-child with a permanent mental image of her mother, narrow, bony feet barely touching the wood of the porch deck, her body dangling helplessly, the whites of her eyes showing all around the blue irises. Worth the permanent mental image of a muscular corded forearm, tanned, tattoo'd fingers clenched around the pale white vulnerability of my mother's throat as he slapped her with that sandwich, threw it to the ground, and slapped her again. That's all there is though, a snapshot. I don't remember what happened next. I'm sure it's for the best.

Someone asked me once, about the scene in Fighting For Freedom where Malachi beats Christine because she opened the door of the house during the day, because she talked to the mailman. She said, "It's a good story, I guess, but aren't you exaggerating a little?"

No, I'm not. It's real. As much as we want to pretend it isn't, that it doesn't happen right in our own backyards, it does.

But there's hope. And there's help. Not enough, no. Not yet. But with awareness, with each person stepping out to say, "No, this isn't okay with me," then the hope will grow. Help will become easier to find, less shameful to reach out for.

I have to believe that. And I had to write that book, to help others believe it too. I wrote it for the woman who messaged me a month after it went live, to tell me that it helped her see the reality of her own life, that it helped encourage her to change things before they got too bad. For the man who messaged my author page last year to remind me that it happens to men, too (I know), and ask if I planned to write that (I might). It's for children like me that grow up with terrible memories, for women like my mother who have to live with the trauma for the rest of their lives - for children like mine, little girls who will someday choose men that I hope are kind and gentle not only with their hearts, but with their bodies.

It's for the dream that rests in the deepest part of my soul, the need to reach out and pluck victims from the pit, the fervent wish to instill a belief in something better. The desire to renew hope on a larger scale.

But until then, reach out today. Protect and encourage the people around you. Ask someone how they're doing, and don't let them lie. Reach into the darkness today, and light someone else's flame. Spread hope. Help others who are imprisoned by abuse, by violence, by addiction, by fear ... help them to Fight for their Freedom.

In other news, I'd like to take a second to say thank you to Jodie Pierce and Sheri Meece, who recently joined my street team, the B.K. Bookies. You two are awesome, and I'm thrilled to be getting to know you both better through the Bookies team! Thank you!
Blog Posts