Thursday Thoughts: Why I'm Proud To Be A Jerk Mom 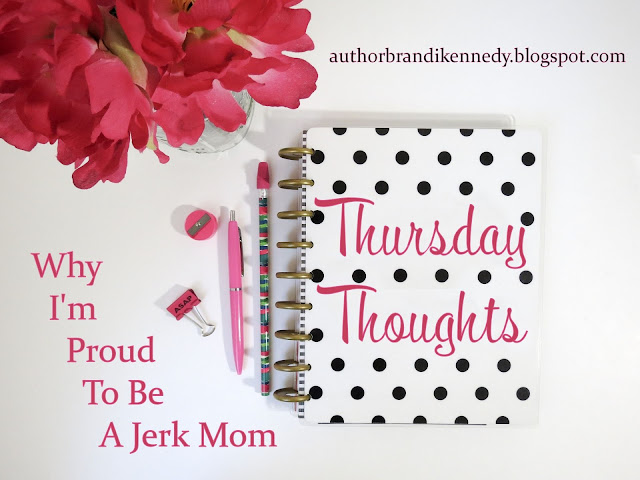 Recently I read a great post on AiringMyLaundry.com, which was titled "Why I Won't Co-Sleep," and which was so relatable I couldn't help laughing. It was similar to another (more recent) post on the same site, titled, "I'm A Butthole Wife (Sometimes)," which also had me giggling to myself as I read.

I loved the honesty in both posts, and the way each one said, "I am who I am, this is what works for me, and I go with what works for me." It was just so self-accepting, and such a secure way of saying, "I have boundaries, and I expect other people to respect them."

As a woman who has struggled with setting solid boundaries in the past, and who has struggled greatly with defending my boundaries even when I have managed to set them, these two posts RESONATED in me in such a deep way. I loved the way Amber wrote about her willingness to be "a butthole wife" - especially if it meant letting her husband know that being his houseWIFE didn't mean she was okay with being his houseMAID:

"... that I should be grateful that he'd rather spend time with me than pick up his socks. He picked people over dirty socks. Yay me! No. I'm sorry, but no. He's a grown man with hands. Socks belong in the hamper. It's not rocket science. So I would complain ..."

I also loved the way she stands up for her own personal time and her own personal space with her kids, letting them know that she's a person too, and that being a person comes part and parcel with certain needs for time and space - and uninterrupted sleep:

"I wanna sleep with you, Mommy."

"Well, I want to weight 20 pounds less but I like food too much and it's not going to happen. We don't always get what we want."

This is something I wish hadn't been so hard for me throughout the course of my life. I wish I hadn't gone back after leaving my ex-husband the first time, because it was so painful when someone I loved and respected was disappointed in me for "quitting" my marriage to an addict who had endangered our family. I wish it hadn't hurt so much to have that same person tell me how disappointed they were that I went back to my husband - because I "didn't stick up for myself."

I wish I hadn't had to cut ties with that person, because I still miss them everyday even though I have accepted that I can NEVER please them.

But there were good things that came out of that, too - I learned that you truly "can't please all the people all the time" - and that lesson thickened my skin, preparing me for:
It's not that I'm impossible to please, or that I set an impossible standard to achieve. I'm just as likely to praise a low C as a high A on a report card, depending on what I really think my kid is capable of - although I'm happy my kids are naturally pretty smart (which is a total fluke, since they obviously did NOT get it from either of their parents). I'm also just as likely to tell my daughter that she can be a model, or an astronaut, or a teacher (or an author?) - if she's willing to put in the work and accept that EVERY career option has it's drawbacks.

But ... I did tell my teen that modeling probably wasn't for her, because having to starve herself into a size zero would shatter her quality of life. She's naturally pretty svelte but she loves food, and if she had to live on the kind of diet models are rumored to be expected to eat ... well, let's just say I recommended other career options that allow food.

I know right? What a jerk mom! I'm supposed to be telling her she can be anything she wants to be, right? And that the rest of the world has to sit back and hush up and let it happen, because she's special?

But the thing is ... she's not special. Not to the fast food manager who is probably going to be her first employer. He (or she) will know that teenagers are a dime a dozen, and that there's any number of them out there looking for a job so they can get the newest phone/shoes/clothes/car that everyone else has and BE COOL. That person will not think my daughter is special just because I do. And I'm not going to teach her otherwise, because her second boss won't think she's special either. Niether will her third boss, or any of her college professors. To them, she'll just be another person making their way in the world - and the world doesn't coddle sissies.

I'm also a jerk mom in other despicable ways, too:
After many years of being raised by a jerk mom, my children are familiar with "the mom look," which usually stops them misbehaving within seconds (unless we're at home, where their sense of safety overrides their fear of being embarrassed by public discipline).

For instance, they would never do anything like this:

because it would make me do this:

and then this would happen:

and since I'm such a jerk, we'd probably come directly to this:

after which my kids would:


Because sometimes, you just gotta be a jerk mom to get the job done.

I'm okay with being a jerk mom because it means I care about how my kids turn out - and my kids know and acknowledge what that will mean for their potential in the future. Josephine has already come home from school many times, telling me stories about kids she knows who are allowed to drink and smoke, who spend time alone unsupervised with boys, who are already dating, who are allowed to dress immodestly. She tells me these stories with a mixture of shock and awe - and she always ends the story by thanking me for caring enough to protect her from herself. This almost always trickles down to Eden too, who tends to observe these stories with sadness and empathy for the kids Joey talks about at home - after which, she comes to hug me and thank me for being "the kind of mom who makes us listen and be good little kids."

Maybe it's because Joey's pretty mature for a kid of just thirteen, and maybe she would have ended up this way anyhow. Maybe Eden doesn't need my influence to be a rule-follower or a respectful person, and maybe she doesn't need Joey's influence to see the good side of having a jerk mom. But maybe, just maybe, it's because for all their lives, they've been taught with a generally loving hand, guided by a generally thoughtful teacher, and now and then, set in place by a generally jerk mom.

In other news: My grandma came through her surgery and is now recovering. Broken hips are a challenge though, and healing from surgery is rough even for the young and healthy. We're still watchful.

Related posts - lest you should leave here today thinking anything other than that I adore my children: